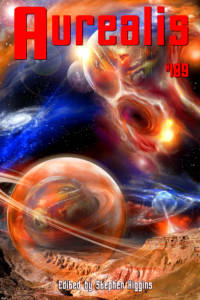 Issue #109 of Aurealis has new fiction from Terrance Macmanus, Gus Moreno and Lynette Aspey as well as reviews and two new compelling articles. It has enough to keep you entertained and up to date until, well until issue #110 comes along next month.

I have a confession to make. I’ve only ever read two novels originally published in a language other than English. I missed out on reading Jules Verne when I was young and the closest I got to ‘foreign’ writing was… well it just didn’t happen. I read a lot of Australian, British, and American authors but that was about it. I didn’t even read much that was set anywhere that didn’t have a western cultural background. My loss. The only two I have now read (in translation) are The Maps of Time by Felix Palma, and The Three Body Problem by Cixin Liu.

Felix Palma is a Spanish writer of some renown. It may be that he is a fantastic stylist and a writer of great prose in the original Spanish but I was really disappointed in The Maps of Time when I read it. I don’t want to perform a hatchet job on the novel. I should point out that it garnered a lot of praise and still gets good reviews. At the time I was trying to write a novel myself and I kept it propped up by my desktop as encouragement. You know… ’If this can get published then there’s hope for me’ type of thinking. Maybe it reads really well in the original Spanish? Is it the translator at fault? Is it both? I don’t think the problem was a cultural one for me as a reader, as Palma’s novel is set in London in the late 1800s and deals with subjects and topics with which I am familiar. So I ‘got’ the point of the novel. I just didn’t like it.

Cixin Liu’s novel is a different matter. I know next to nothing about Chinese culture, history and social mores. I know the stereotypes, a smattering of probably inaccurate history and some food. And I really liked the novel. There are wildly differing reviews of the novel all over the internet, but I found it engaging, interesting and entertaining. If you’ve read my recent editorials you’ll know I’ve been looking for new authors and maybe I’ve found hundreds of them writing in other languages. Part of the interest for me is that Cixin is writing about aliens. And when he’s writing about Chinese cultural beliefs that is alien to me. When he begins to write from an alien point of view, well that just throws a whole new level of alienation at me. I actually found these passages slightly odd. Alien if you like! Which just added to whole experience. I liked it all and found it to be a bit different from everything I’ve been reading for ages. The translator of The Three Body Problem states that, ‘The best translations into English do not, in fact, read as if they were written originally in English. The English words are arranged in such a way that the reader sees a glimpse of another culture’s patterns of thinking…’ and this is apparent when you read The Three Body Problem or rather, it was apparent to me when I read it, given that the reading experience is a particularly individual experience. And even that thought highlights the notion of reading as being a bridge between cultures, thoughts and people.

As many here know I’m a secondary teacher. I have a new student in Year 7 who told me he doesn’t read. He can read, he just doesn’t. God, I feel sorry for him and I’m doing all I can to change his world.

From The Marred Queen by Terrence MacManus

Terence MacManus lives in Geelong with his wife and three kids, spending half his time on parenting, half his time on writing, half his time singing opera and no time on mathematics. ‘The Marred Queen’ is his first work of published fiction although he regularly posts blogs, reviews and short fiction at www.terrytalksfiction.wordpress.com.
In late 2018, Terence is due to complete his master’s the
:

Leo could always tell a spy by their smell.

The child walking beside him looked the part of the browbeaten lower-city waif, sure enough. He was small, ragged, and dirty, his face and hair streaked with soot and mud. His too-loose shirt and too-short pants were grimy with the ground-in filth of weeks spent sleeping outdoors and carried all the scents Leo would have expected from a gutter-rat: the tang of woodfire smoke, the deep onion-like character of ingrained sweat and night soil runoff and, of course, the overriding odour of dried blood. Those scents had filled the room where Leo first met the boy, and wafted over to him even as they prowled through the darkened streets of the industrial.

Yes, very convincing, Leo thought with an internal sigh. He fooled the leaders of that cell with ease. But then, if they had any real experience with subterfuge, I wouldn’t need to go on these inspections.

The spy hadn’t got past Leo, though. Or rather, he hadn’t got past the tiny glowing sigil hidden on Leo’s septum—inscribed by Cassandra’s own hand—which had caught, beneath the layers of carefully crafted stink, the unmistakable hint of perfumed soap that still lingered on the boy.

From Painted Ocean by Lynette Aspey

Lyn ran off to sea in her early 30s and, after crossing the Atlantic from England to Barbados in 2001, she spent over 15 years cruising the Caribbean. ‘Painted Ocean’ incorporates a great deal of real life experience, not to mention Lyn’s abiding love for the sea, deep concern for the environment, interest in AI and passion for Coleridge. In 2013, Lyn and her family returned to Australia, making a
:

‘You unleashed this storm, Ray.’ Annie wondered if he was going to break her wrist, decided it was worth the pain just to see him crumble. ‘You released my prototype,’ she continued. ‘You hacked my system and released an experimental intelligence onto a global network, an AI whose baseline is pre-industrial.’

The blood left Chapman’s face. He let go his grip and stepped away.

Annie rubbed her wrist and did not even try to keep the gloat from her voice. ‘There’s been a takeover, Ray. Global Meteorological no longer owns the weather. The reset button has been pushed.’

From The Great Filter by Gus Moreno

It was rare—rare being never—for all eight departments to gather into the Caf at the same time. Every handshake rubbed calluses against calluses. The cafeteria thumped with the beat of shoulder-grabbing and back-slapping. The tables hummed with grunts and belt adjustments and smoker coughs. At any moment the day foreman was going to walk in with an old Smolt tech named Patrick. This was going to be Patrick’s first day since the accident, and we all wanted to see his new octopus arm.