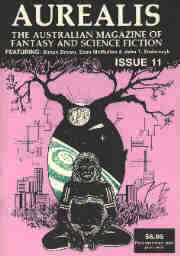 There was very little light. The atmosphere was thick and heavy. Its principle component was decay  the sweet smell of rotting flesh and stewing pools of fetid water. The streetkid looked up. He could just make out the glow of artificial light high in the towers. The Haves lived there, were born there, lived and died there. The streetkid lived in the Gutters. He, and others like him, lived off the refuse of the Haves. They threw everything into the Gutters, even their dead. The streetkid lowered his gaze back to his own world. In front of him was a group of kids like him. They regarded him with no emotion. There was no hatred; how could they hate one of their own? But there was hunger. He was alone. The streetkid knew that he was about to die.

It just doesn’t work, does it? What’s wrong? The language. The context.

In issue #9 of Aurealis we published a letter from Michael O’Neill. In this letter he expressed his disappointment that we had chosen to publish a story that contained the “F word and the C word”. The story was Stephen Dedman’s “Foreign Bodies” (Aurealis #8). This letter has prompted a few other readers to write in expressing their thoughts on this matter. Briefly, Michael O’Neill stated that the story was “smut”, that it “should never have been published in a serious SF magazine”, that the publication of this story would “reduce the potential readership” of Aurealis, that the “F word and the C word” were never meant to be printed, and that the use of these words were “mere attention grabbing” and “only served to indicate that the author’s vocabulary skills let him down”.

I do have a few problems with some of Mr O’Neill’s assertions, and I intend to address them within this forum. Just to dispose of one of these assertions quickly: There is no word that cannot or should not or was not meant to be printed. Every word is a part of our language.

I am not seeking to denigrate Michael O’Neill’s obviously strong beliefs on this subject. I do feel, however, that I should perhaps define our editorial stance on some of the issues that he has raised. And before I go too far, I should state that I am not simply defending or justifying the publication of “Foreign Bodies” in Aurealis #8. It is a good story. That is all the defence it needs.

So. We do not object to bad language, or, to be more accurate, swearing, provided that it is in context. I warn readers that I’m going to use “the F word” shortly. If this is going to upset you, I would suggest that you skip the rest of this paragraph and go straight on to the next one. The streetkid in the first paragraph of this editorial obviously would not say “Sugar!” or “Gosh” or “Jeepers” or “Oh poo!” He would say “Fuck!” (There, I’ve said it. You can look again now, but I wouldn’t mind betting that everyone read the whole paragraph despite my warning.)

Most (if not all) of the stories that appear in Aurealis are about people. People do and say the most extraordinary things  they wouldn’t be interesting if they didn’t. As we are dealing with what should be regarded as real people, the reader should expect them to react as real people would  physically and verbally. Had Stephen Dedman used the words fornication and vagina instead of the harsher, but more realistic (given the context) F and C words, well, he probably would have received a rejection notice saying, “Good story but your dialogue is unconvincing”. Mr Dedman may have responded to this with “Fornicate you! You persons born out of wedlock!”, and we would not have had the opportunity to publish a very good story.

During the publication of all eleven issues of Aurealis, we have only baulked at publishing something once. In issue #2 you will find the story “Rain from the New God” by Simon Brown. It does not contain “the F word” or “the C word”, but it does have a scene which, while in context, would offend a lot of people. We couldn’t make up our minds about this scene. We decided to ask Simon if it would worry him if we deleted it or if he would care to re-write it (he said it was okay to delete it). Then we changed our minds and decided to include the scene. We were both still uneasy about it  not because either of us is of a particularly religious persuasion but simply because we knew it would offend some people who were. We did not receive one letter of complaint.

To sum up  expect to see bad language in Aurealis occasionally (including this issue). The stories are about people and people do swear. Expect stories to describe sexual relationships occasionally. People do fu . . . people do have sex. We are not seeking to shock or to gain cheap notoriety through the publication of controversial stories.

I would just like to say that I am more offended by poor writing or hackneyed ideas than by swearing. I am most offended by plagiarism or anything which is an insult to the reader’s intelligence. Apart from that very little offends me. I just couldn’t give a $^&*!

When Michael Dreyfuss returned to Falmouth after five years away, he was twenty three years old, paralysed below the waist, and dreaming of Brother Stripes. Even as the orderlies gently lifted him from the back of the ambulance and placed him in a wheelchair, he heard the animal's roar, starting as a low rumble like thunder over the horizon, then swelling in volume until the leaves shook in the trees around him. Dreyfuss glanced at the orderlies, who gave no sign they'd heard anything.

Are you really here?…

…"I saw the ghost again," Parly Yieldshield said. The Deathseer nodded sagely. "I had just reached the edge of the wood," Parly continued, "and turned to see how far behind you were, and there it was, towering above you. It had no face."…

I turned to look at the dealer. I'm not really into religion, but it's funny how things pan out sometimes.

"It's on special, man. Only two thousand creds."

"Over a thousand hours  guaranteed…"

…I'd picked him up at Central Station. He came in from Upland, and I was lucky enough to be at the head of the queue when he came off the Transport. Then, as we edged out of the station and into the Harbour, he told me to take him to the Dreamhouse, and I asked him if he was down for a life. He nodded and I started my sales pitch…

…Hermes lifts his cup. He is startled to find the boiling brown drink has faded to a cool, fizzing yellow. "What is this?"

"Champagne." Freya grins benevolently. "Knock it back. That should take some starch out of your ancient bones."

Hermes complies, dubiously. "Is it wise to perform miracles in public?"

"Wait until you learn the ropes." Her eyes radiate with green and secret pleasure. "Mortals refuse to believe what they don't understand. That is their most charming characteristic…"