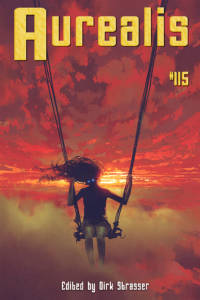 Aurealis #115 transports us to the truly alien yet strangely recognisable Australia of Clive McAlpin’s ‘The Spoils’, then to a planet evacuated by humans in ‘The Empty Quarter’ by Jai Baidell, and finally to a place where the only choice is between two sorts of devils in Pierce Skinner’s ‘Sacrifice’.

We all have books that we read when we were younger and which led us into fantasy or science fiction or whatever genres we choose to spend the bulk of our time reading as adults. These are often called gateway books, those novels that opened up reading for us. While some of my gateway books into fantasy include staples such as The Hobbit, Lord of the Rings and the Narnia series, I would also count a handful of more obscure books as my way into fantasy in particular. I suspect we all have some of these lesser known books in our reading past that have had a profound influence on us.

I think of these as portal books. A gate is a public entrance, a way in that everyone is aware of. Some of us may choose not to enter, but there’s no denying its renown. It’s there for everyone to see, bold and unforgettable. Like Babylon’s Ishtar Gate or the Golden Gate of Byzantium or the Meridian Gate to the Forbidden City. But whereas a gateway is public, drawing attention to itself, portals are hidden, only visible to the few—and that’s often where the truly profound magic lies. It’s these sorts of books that reveal most about us. While gateway books are those we share with others, portal books are more personal—they divulge our uniqueness. We rarely talk about them because others will most likely not have read, or even heard of, them.

One of my portal books was so buried in my past I couldn’t even remember the name of it. (By coincidence, it also featured a type of portal as a plot device.) It was by British author E (Edith) Nesbit. Her most famous novel is The Railway Children, but this well-known book had little impact on me and I barely remember reading it. At around age eleven I scoured my local library for E Nesbit books. I found many of them a little disturbing. She didn’t write like the other authors I’d read. There was an edge to it I couldn’t quite put my finger on. Perhaps I’d now call it a hint of the grotesque, a slightly off-kilter frisson. The novel I remember most powerfully, the one that I would nominate as my key portal book, was about a dirt-poor crippled orphan boy in Edwardian London who mysteriously travels to an alternative world 300 years earlier where he’s a healthy son of a nobleman. The story didn’t pivot around predictable plotlines. I haven’t re-read it since, but I remember the boy moved between the two periods several times until it got to a point where he had to make a choice. I remember being floored by his freely-made decision to stay in the world where he was dirt-poor and crippled because he was needed there. The novel was called Harding’s Luck.

It’s usually relatively easy to pinpoint how gateway novels have affected you. The influence of portal books, by their nature, is harder to tie down. I’ve only recently realised the connection between this book and my latest novel, which while having a totally different setting, structure and feel to Harding’s Luck, is about portals and the crucial decisions they force on people.

I don’t expect too many of you to have read Harding’s Luck, and I suspect its life as a potential portal book is over. Younger readers these days will probably baulk at the Edwardian street language, and for those of us older readers, the time for gates and portals into reading will never return. You can quite easily find Harding’s Luck online these days. But of course, it doesn’t matter whether or not you’ve read it. You all found your own portals.

From The Spoils by Clive McAlpin

Clive McAlpin's interests include procrastinating, trying to render the atmosphere of a David Fincher film into literary form, and imagining futures that are as doom-filled as our own, but in slightly different ways.
:

I been on another brannigan and I’m hiding out from the gallowboys what’s on me tail when the Musician finds me in the Jackaroo’s Arms out Etherton way.

From The Empty Quarter by Jai Baidell

Jai Baidell’s publications include the science fiction anthology, Dronejack and Other Stories, and a contemporary Australian fiction series featuring the mean-streets of Canberra and Yass, family dramas, and the wide open spaces of the Australian bush.
:

I sign the evacuation order. It’s a relief, really. Sand and vines buried our farms and cities, and there’s no place for humans on Vennia anymore.

From Sacrifice by Pierce Skinner

When Pierce Skinner’s not writing, he can likely be found waiting tables, exploring the local abandoned iron works, or at his favourite Thai restaurant arguing with strangers about Star Wars.
:

The on-hold music for FleshDolls.com is ‘Lacrimosa’, by Wolfgang Amadeus Mozart. I know it is because Mama made me listen to Mozart ever since I was a baby. She said Mozart made babies smart, made them read good and think good, and I guess it might’ve worked if she hadn’t tried to kill us both by driving the car off the road coming down Mill Mountain when I was two-years-old.

From What We Take for Granted: The Australian Fantastical Imagination and Ida Rentoul Outhwaite by Gillian Polack

Gillian Polack is a writer, editor and historian. She has six published novels and is a member of Book View Café. Two of them were shortlisted for Ditmars. Her short story collection Mountains of the Mind was recently released.
:

Like so many Australians, my childhood contained a large dose of Ida Rentoul Outhwaite. If you’d asked me whether she had influenced me, when I was ten I would have said ‘no’. I had not yet discovered Tolkien. A friend introduced me to him in high school, and I was busy defending myself against Narnia and was dealing with its religious aspects at that time, and they stung. I would probably have suggested that my fantasy influences when I was younger were Edith Nesbitt and Edward Eager and Ursula Le Guin.

From The Outsider: Disturbing Parallels in HP Lovecraft’s Life and Fiction by David Ellrod

David Ellrod is an avid reader and writer in multiple genres, including nonfiction articles, short stories, and one nearly-complete steampunk novel. All of his writing remains focused on the fascinating intersection of history and creative fiction.
:

One always hopes that horror authors write from imagination, not experience. But certain fictional inspirations have an uncomfortably close relationship to reality. Howard Phillips Lovecraft (1890–1937), an author who helped horror move into the modern age, was subject to such inspirations.