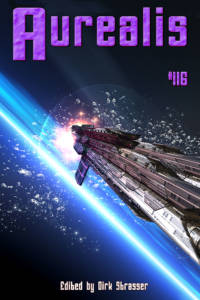 Aurealis #116 features our Year’s Recommended Reading List, plus Mike Adamson’s ‘Walking on Titan’, where the immersion of a human persona in an AI generates a unique consciousness. Hester J Rook’s ‘To Drown in Silver’ explores what happens when a liminal creature yearns equally for two states of being, while ‘Apple Black’ by Barry Charman tells the story of a man haunted by the folly of technological irresponsibility.

How popular is fantasy & science fiction compared to other fiction genres? Is its popularity trending up or down? These are obvious questions for a magazine like Aurealis to ask. My hunch based on my experiences in the industry would have been it was in the top two (or maybe three) most popular genres—but then I could be biased in my thinking because I write speculative fiction, read more speculative fiction than any other genre, and co-edit a speculative fiction magazine. I’m in contact with like-minded people daily. It’s easy to over-emphasise how widespread something is under those circumstances. Hunches are all well and good, but I decided to hunt up some recent statistics.

It proved quite tricky to do.

A survey of US readers by Statista last year asked people which genres they read regularly. These were the results. As you can see, people could nominate more than one genre.

I don’t have access to the methodology or raw data behind this, but what struck me was that the top genre ‘Crime & Thriller’ was the only ‘double-barrelled’ category in the survey. I suppose it’s a natural association to combine the crime genre with the thriller genre, even though not every crime novel is a thriller, and not every thriller is a crime novel. However, wouldn’t the combining of fantasy & science fiction into one category for the purposes of this survey have been at least as natural?

So what would the result have been if they had been classed as the one ‘Fantasy & Science Fiction’ category within the survey. Clearly, since the respondents were allowed to give more than one answer, you can’t simply add the two percentages together, but there’s no doubt combining the two results would have changed the results considerably, most likely putting ‘Fantasy & Science Fiction’ at number two, possibly even number one. It all comes down to how many people in the survey said they read science fiction regularly but not fantasy and vice versa.

A 2017 survey by the Australia Council for the Arts and Macquarie University gives us some insight into the relative popularity of a combined ‘Fantasy & Science Fiction’ category. In this survey, people were asked to nominate their number one favourite adult fiction genre (that is, they couldn’t list more than one, so we can’t compare it directly to the Statista survey).

Their results were as follows:

This one has a triple-barrelled category as the most popular. Interestingly, it focused solely on adult fiction titles, so it deliberately excluded Young Adult/New Adult titles which are often also read by adults and which have a high proportion of fantasy & science fiction titles.

It’s usually worth digging past the headlines of a statistical-based announcement. Statistics are incredible useful and a crucial part of modern life, but they can be misleading if they are naively interpreted. For example, industry statistics and publishing professionals have been reporting for years that since 2010 print sales for fantasy & science fiction have halved.

Just to add some local evidence that there’s a boom in fantasy & science fiction, thanks to all of our readers, in 2018 Aurealis has its most successful year since going digital.

From Walking on Titan by Mike Adamson

Mike Adamson holds a PhD from Flinders University of South Australia. He lectures in anthropology, is a keen photographer, a master-level hobbyist, and has a passion for speculative fiction, with over sixty story placements to date.
:

Titan is a dynamic world. Winds roll the sand and ice grains in the thick air under a sky of ruddy orange hydrocarbon smog. Waves stir on the surface of the methane lakes that dot the frigid deserts. The larger lakes are mostly around the poles, but lakes fed from aquifers flowing from the planet’s decoupled shell of ammonia and water ice create oases in the more rugged equatorial regions.

From To Drown in Silver by Hester J Rook

The rains came as they always did, slicking the pavement and drenching the sea blight on the dunes, turning the ocean’s bucking form as grey as the skies above.

It was her favourite time of year. She could taste the iron in the air, and the salt, and occasionally the sky would split with lightning and hail would tumble down, bouncing and singing off rooftops. Sometimes she would huddle inside, as the rain ran thick as syrup down the windows, full up with tea and music playing. She would watch the bedraggled lorikeets in the garden hunch their wings about their rain-spiked necks and observe the way the clouds crested and coiled overhead. Other times, when the call of the waves was strong within her, and she found her human body too ungainly to dive as her instincts urged, she would take her skin from its hidden place and pad barefoot along the beach.

From Apple Black by Barry Charman

Barry Charman is a writer living in North London, where he has lived his whole life. He has been published in various magazines, including Ambit, Firewords Quarterly, Bare Fiction Magazine, The Literary Hatchet, Perihelion and Popshot.
:

‘Have we broken the planet?’

Lear waited for an answer and got only static. Wincing, he put the communicator back to his lips and repeated his query. He got some feedback, and then the whispering. That sound, like dry leaves crumbling in an unseasonal breeze… he knew what it meant.

From The Importance of Telling Scary Stories by Claire Fitzpatrick

Claire Fitzpatrick is an award-winning author of speculative fiction and non-fiction. She won the 2017 Rocky Wood Award for Non-Fiction and Criticism. Her debut anthology Misanthropy will be published by IFWG Australia in 2019.
:

Storytelling has long been a tradition to make sense of our world and to share our understanding with others. Sitting around a campfire, in our bedrooms, around a table—we immerse ourselves in the symbiotic exchange between teller and listener to foster our imaginations. Considering this, what does it mean to scare children? How should parents scare children? And why is it so important to do so?

From Talking Swords Are Okay by Matthew Harrison

Matthew Harrison lives in Hong Kong and, whether because of that or some other reason entirely, his writing has veered from literary to his boyhood passion, science fiction. He has published numerous short pieces and is building up to longer material as he learns more about the universe.
:

Some SF&F magazines have lists of story tropes that they don’t want to see. These lists can be very extensive—one I saw recently included time travel, alien abduction, dwarfs meeting in a tavern, magic objects found in a field, and ‘…talking swords, talking cats, talking toasters, talking anything’. I was actually about to submit a story about a talking toaster to this particular zine, so I felt suitably crushed. Yet as I mentally downgraded my story from ready-to-submit to ready-to-bin, I paused. What if the editors were missing something?