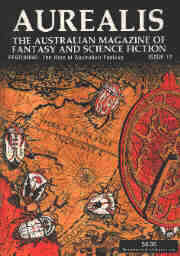 Why publish a science fiction magazine? People have asked me this question on a number of occasions, and it is difficult to answer to their satisfaction. The problem is, if they need to ask the question then they wouldn't understand the answer.

Why produce a science fiction magazine? It's certainly not the money. As Peter Nicholls pointed out in The Encyclopedia of Science Fiction, Australia has in the past repeatedly proven that it cannot sustain a viable SF magazine. The success Aurealis has achieved is to make a small profit and to do what no other SF magazine has done: remain viable. Despite the obvious strengths of Chimaera Publications' approach  our selection of stories, our innovative marketing, our preparedness to do everything ourselves rather than contract a third party, our use of desktop publishing techniques, our ability to analyse and learn from previous publishers  the magazine was never going to make anyone rich. If Chimaera Publications wanted to make money in publishing, we would be producing cookbooks.

You also don't produce a science fiction magazine for the awards. It's great if you manage to pick some up, but you wouldn't want to rely on them for your motivation. There is often no rhyme or reason behind them. At the recent World Readercon Awards, Aurealis was voted in the top five small press SF magazines in the world  a first for an Australian magazine. Yet at the same time, we polled a miserable five votes (out of a total of 64) in Australia's own Ditmars  finishing last behind the four other nominees  and were ranked well behind a book catalogue.

Once again Aurealis has managed a number of Honourable Mentions in the various Year's Best anthologies overseas. Paul Merrick achieved this in Gardner Dozois' The Year's Best SF with his #7 story "Scoring"  a story which was equal second in our own readers' poll. Simon Brown's "Shadows" from the same issue made the list in the Ellen Datlow/Terri Windling The Year's Best Fantasy and Horror, as did A. F. Kidd with issue #9's "Saint Sebastian and the Mona Lisa". On the other hand, no Aurealis story polled Ditmar votes this year. Not a single vote for any of our authors. As I said, you certainly wouldn't do it for the awards.

So what do I tell those inquirers? Why waste my time with science fiction? If I am interested in publishing, why not produce a cookbook? It would make more money and could quite possibly poll more Ditmar votes. The answer is simple. As most people who know me, I have no passion for cooking (eating is another matter)  but I do have a passion for science fiction. And passion is a funny thing. Why spend hours on end watching grown men run up and down a cricket pitch? Why spend half a day hitting a little ball into a series of holes? Why barrack for St Kilda in the AFL? Some things are not based on reason and intellect.

How can you get across the passion for science fiction? How can you explain to anyone how you felt when as a ten year old you were blown away by the final words of Asimov's "The Last Question" and you discovered God was a computer? How can you tell anyone what it was like when Tolkien led your eleven year old spirit through the ancient forests and dark lands of Middle Earth? How could you put into words what is was like as a fourteen year old to cower behind the vampire barricades with the last man on Earth, what it was like to have to hide a deformity in a world where genetic mutations were abominations, or to live on an Earth which has become one giant hothouse?

You can't. Either they've been there, like you, or they haven't.

Aurealis was from its inception designed to be a large scale magazine. We wanted to force back the boundaries. We want to reach the widest possible audience, to give everyone a chance to discover the passion. Science fiction, and in particular Australian science fiction, doesn't belong to a select few. The scale in this country has been far too small for far too long. And it has been kept there by a lack of vision. To Peter Nicholls, who seems to reflect this commonplace view in the Encyclopedia, we say: No, we don't claim a print run of 10,000. That was our print run for the first two issues. If "surprising success" to you is selling out of a print run of around 250, so be it. That's not what Aurealis is about.

Science fiction, as has been said before, is the literature of the twentieth century. Australian SF has been kept behind too many barriers in the past. It belongs to every fourteen year old who happens upon a copy of Aurealis in their school library. It belongs to all those would-be writers out there who think they're the only ones in this country dreaming up strange worlds. It belongs to every university student and university lecturer, every professional, tradesperson, housewife, and househusband who finds Aurealis in their local newsagency and who suddenly sees there is such a thing as Australian SF.

That's why we publish a science fiction magazine.

The Tale of Valkyra and Verlinden – Dirk Strasser

…As he sat in the penthouse window, absently rubbing his cheek with his deformed hand, Crab watched his brother's distant figure. It suddenly occurred to the teenager that Pole had lashed out because he was afraid that he himself was close to Ascension. And there was nothing he could do.

On turning twenty-five, man or woman, God's Burden was irrevocably shouldered. It could happen anytime. First the staring eyes, then the shakes, then the bloody nose. After that, there was just death. Pole was twenty-five…

When the government decided to paint the walls around the Jobless Ghetto, most of the Workers thought it was a criminal waste of taxpayers' money. There were a few public meetings and a lot of letters to the editor, but, as usual, the vocal minority was too busy to pursue the matter for long, and the controversy was soon forgotten. Forgotten, that is, until the painters began on the section that faced the monorail track…

Shadows of the Heart – Michael Pryor

…"You want me to tell you about the wonders of our grand town, and how it gained its reputation? Should it not be the other way around? Should not I be begging you to tell me of the miracles of Moscow?"

He waved dismissively. For a moment, I felt as if I were the simple country dweller, and he the benign, civilised city grandee. "Maybe later," he said. "Perhaps I may enjoy telling you of some things. Perhaps some may interest the Tsar himself."…

Another difference which Duvall noticed was the slight, rainbow-like shimmer given off by the organs arranged around the room. I wonder what the system has left out, he thought, … or included. The hotel room in which he stood was a virtual reconstruction of the crime scene, a forensic model, in which evidence could be handled or moved without disrupting the actual scene back in the real hotel.

At this moment, the room was just as the janitor had found it: blood-soaked, human organs arranged neatly and symmetrically across the floor, a human hide splayed like a bearskin rug. Duvall hated cases like this. To him, it looked as if this woman had decided to turn herself inside out. But of course, that would be impossible, he thought. Highly unlikely…

As the autumn sun blazed against the towering white peaks of the Berner Alpen, the clear evening sky promised a bitterly cold night. A meltwater stream that fed the headwaters of the Rhone splashed through a deep gorge that guarded the approach to the village of Marlenk. A single rope and plank bridge was its only link with the road that led north to Berne and south to the St Gothard Pass and Italy. Marlenk was a cluster of three dozen stone cottages, a large inn, a chapel and a length of low wall that was more windbreak than fortification.

The sentries of village militia watched a dozen pilgrims approaching on their way south to Rome. They pitched ragged tents on the wayfarers' green beside the bridge, but only one chose to cross to the guardhouse and enter Marlenk. He was a priest, well spoken and friendly, and carried no weapon but the knife that he used for eating. It was 1358 Anno Domine, two years after King John of France had been captured by the English at the Battle of Poitiers…