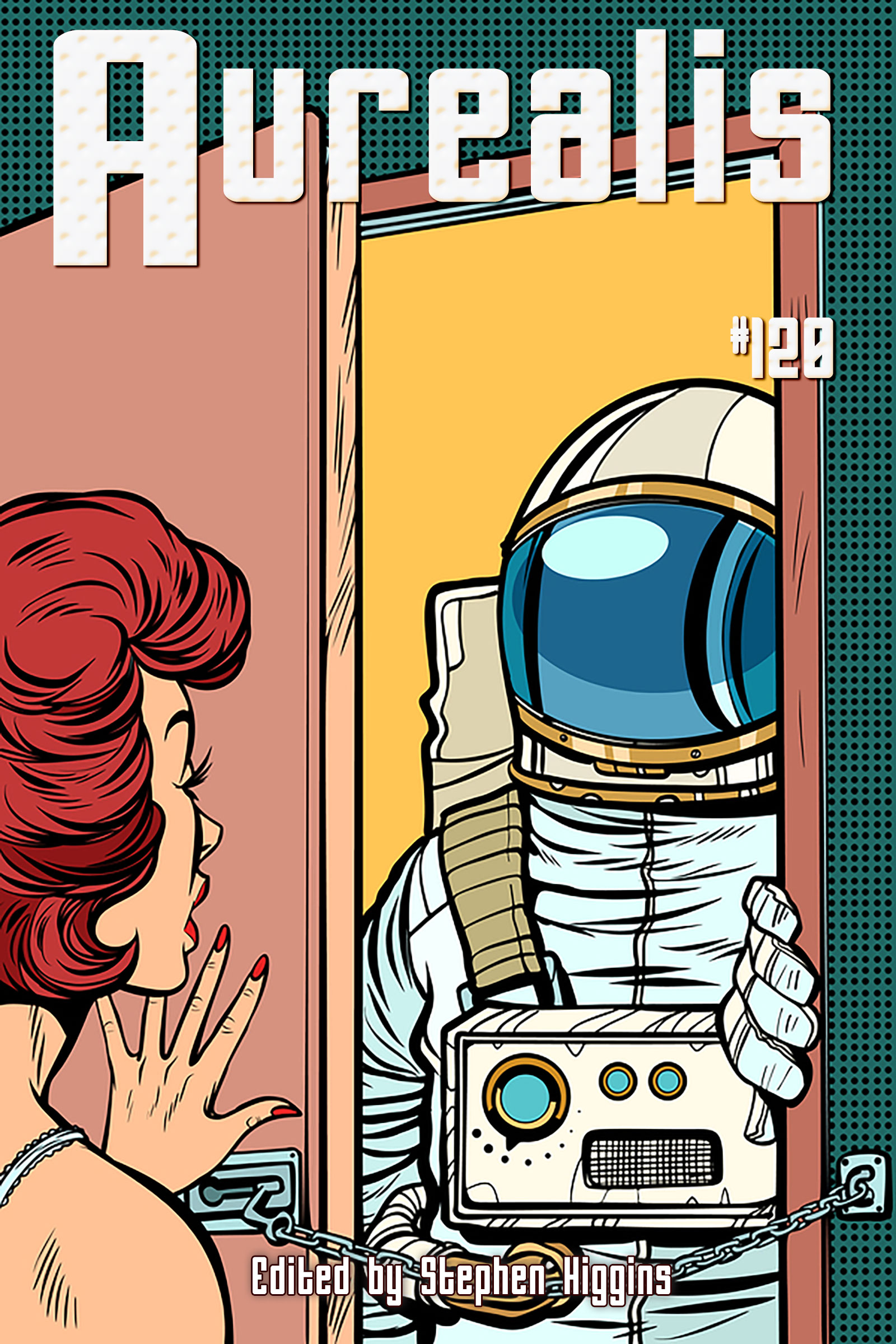 Aurealis #120 is out now, featuring the ominously unsettling ‘Of Roses and Electric Shock’ by Joshua Caleb Wilson, plus the wide-ranging and thought-provoking non-fiction of ‘Where do Writers get their Ideas from? – Mr Cole and his Funny Picture Books’ by Gillian Polack, ‘Lovecraft, Audiobooks, and the Evolution of Storytelling’ by Claire Fitzpatrick and Eugen Bacon’s ‘Writing and Reading Speculative Fiction’. And don’t forget our helpful Reviews section, with plenty of insights and pointers to add to your TBR list. Aurealis, the last word in Speculative Fiction

Welcome to the May issue of Aurealis. I have been away from the editor’s chair for a while. There are a few new bits and pieces to get used to, so I hope I don’t push the wrong button or pull the wrong lever.
As has been my wont, I have been seeking out new authors to read and, at the same time, I have been exploring new music to listen to as well. I struck that phenomenon of diminishing returns when researching new writers and musicians. All of the really new artists don’t seem to have prolonged careers (in music anyway) and all of the really old artists seem to be disappearing.
The audience for a band that had its heyday back in the 70s is shrinking (often literally) and they don’t seem to be acquiring new audience members. And the same seems to be true of ‘classic’ speculative writers. Obviously, if you log onto the iBook’s store, you are going to see new releases. You do, occasionally, see classics like Dune and the Foundation series by Isaac Asimov but only because those texts are being filmed.
Anyway, the casual reader has to search out the classics in ways that they have not previously had to search. When there were a lot of physical bookstores, they had to stock different books in order to attract custom. This meant that you could visit three different shops and find a variety of writers and novels in each. There was a lot of crossover when it came to bestsellers, and as support to these bestsellers, there were a plethora of different texts.
You don’t get that with ebooks. Or rather, you get too much. At first glance there are the new releases and bestsellers, then come the newish releases and second-bestsellers, and then there is the back catalogue of millions of titles. The sheer volume of texts available makes it hard to choose. You have to research. There are sites like Goodreads that direct you towards other authors you may like and, of course, the major online sellers provide the same service—it’s a bit hit and miss.
I used to find books by second-tier writers simply by looking at them on the shelves. They were there in front of the customer. Similarly, I found new music by browsing the record racks or CD racks and just choosing music by ‘the vibe’ or by having a quick listen. And now I find myself getting numerous samples of new novels, and I read an awful lot of samples. Maybe I just have to work harder or maybe I’m approaching an age where it takes a lot to engage my sense of wonder. I’ll try harder, I think.
Fortunately, I get to read a lot of new fiction by new authors via this magazine. I hope you enjoy the issue!

From Of Roses and Electric Shock by Joshua Caleb Wilson

Joshua Caleb Wilson grew up in Johnson County, Arkansas, USA. He left town as soon as he could and lived all around the US for over a decade, but has settled down back home where he works as a videographer during the day and writes late at night and early in the morning when he can. His work has appeared on newpoplit.com and deadmule.com. He’s currently working on his first full-length novel.
:

Amanda took a deep breath as Mandie continued to smile. She fumbled through the dryer and checked the clock on the wall. She had taken that clock from her grandpa’s house when he died.
‘Oh Christ, just get in the car,’ she said.
Mandie followed her to the garage and opened the passenger door. Amanda made a face and sighed.
‘Can you please sit in the back?’ she asked, and Mandie did. She pressed the Just Drive button and started searching the internet for ways to recycle large machinery.
It only took about 15 minutes for Sarah to call. Amanda saw the company logo in her MagicEyes and told Mandie to squat down. At first, she didn’t understand, and by the time she got down all the way, Amanda had missed the call. A few minutes later, the video popped up. She pressed play on the car’s control screen.
‘Hey Amanda. Need you to call me back please. Just gotta ask a couple questions about your robot. Hope everything is okay. Call me back.’ She tapped the screen to end the message but missed the button. Amanda saw her look up and then scramble around for a lab coat. She was fumbling with the sleeves when a white-haired man walked in and scolded her.
‘Sarah, what is going on with Mandie 1?’
‘I’m working on it. Shouldn’t be a problem, sir.’
‘Listen, Sarah, if you want your own robot, you better fix this. Get her to take it back home and everything will be fine. If she does anything to compromise the launch on Friday, we’ll be done with her. And we’ll be done with you, you follow?’

From To Hell and Back by Michael Pryor

Michael Pryor has published more than 35 novels and 50 plus short stories. He has been shortlisted for the Aurealis Award nine times, and eight of his books have been CBCA Notable books. His website is www.michaelpryor.com.au.
:

I was heavied at a dumpling bar in Lan Kwai Fong, my favourite part of Hong Kong, and they really should have known better. Not the famous dumpling bar, the other one, the one that’s better, cheaper, and nearly hygienic. It was fat July so the humidity had made up its mind and had graduated to rain, which meant I left my linen suit at home and went Hawaiian shirt, shorts and sandals.
The two heavies had studied their intimidation playbook. They came up to my stool and flanked me. I ignored them and the obvious handguns under the cheapish jackets on top of their blocky frames. They smelled of fear the same way a cat does on the way to the vet for that certain special operation.

From Timbuktu by Gerri Brightwell

Gerri Brightwell is a British writer who lives in Alaska, USA, with her husband, fantasy writer Ian C Esslemont and their three sons. Her most recent novel, Dead of Winter, was published by Salt Publishing. She is the author of two other novels: Cold Country and The Dark Lantern. Her writing has also appeared in The Best American Mystery Stories 2017, Alaska Quarterly Review, Southwest Review, Cop
:

Recon crew P8/L of the starship Dreadnought has only been on Timbuktu for half a sol and already Cassim’s sick of the place. The massive valley where they put down is choked with broken rocks, some the size of the crew’s enviro-helmets, others bigger than a hab unit. And everywhere—sand. The wind must have picked up because now that sand’s ticking relentlessly against Cassim’s helmet.
But at least he’s got another sample done. He snaps the lid onto the pot, waits for the beep of the info-stamp, then slips it into his pouch. Already the next collection point is glowing at him on his visor display. The recommended route dog-legs through the rocks, glowing a gentle green against the paleness of the planet.