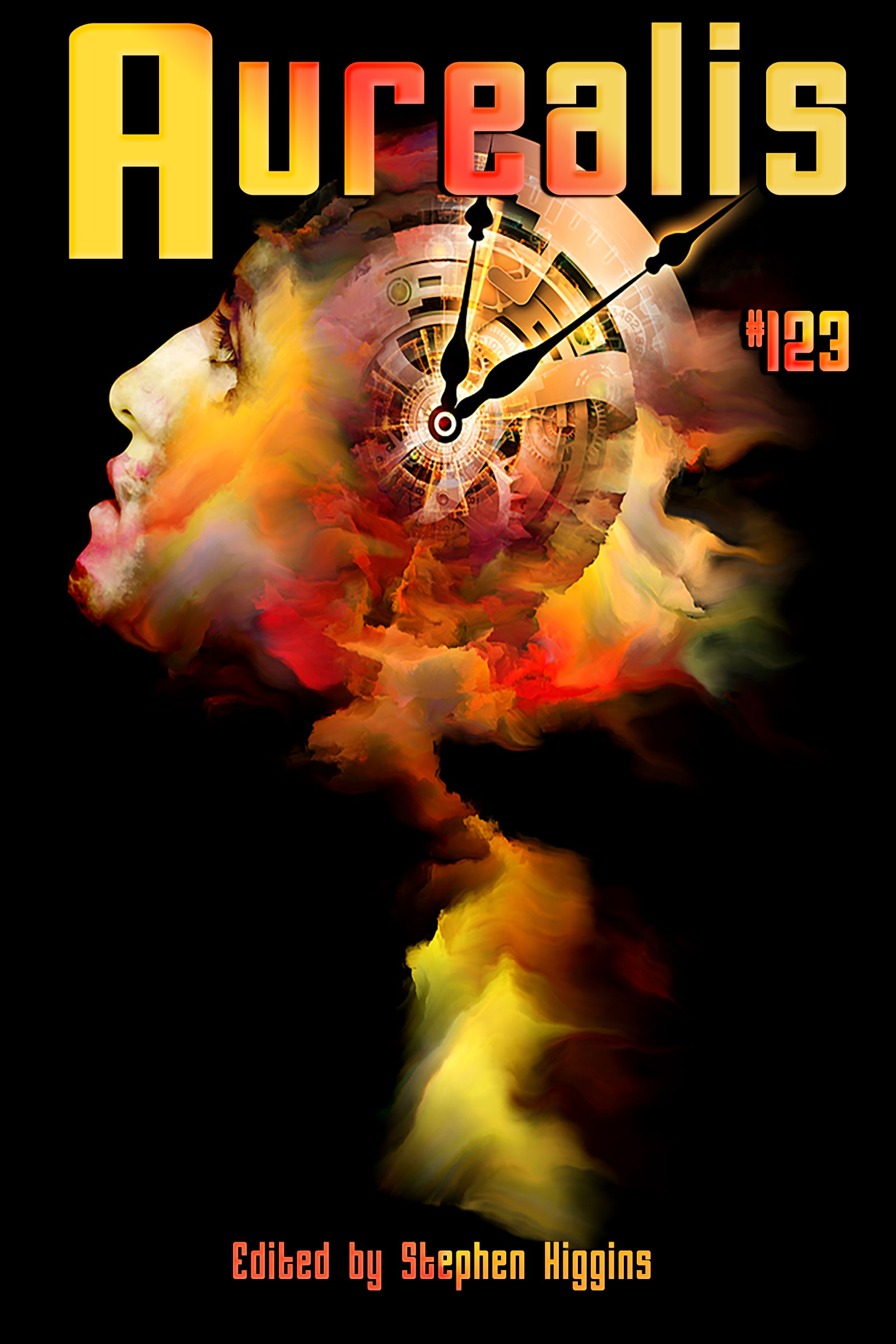 Aurealis #123 is out now! This latest issue features compelling new fiction as well as the usual generous serving of non fiction, reviews and stunning artwork. It has everything you could possibly want in your speculative fiction.

There is a weird relationship between the writer of a story and the reader. Not the readership mind, as that is a whole different thing, but the relationship between the author and the reader in that quiet place where the reader engages with the story.
I have written a few stories, not a lot, granted, but a few. When I am writing I have no ‘vision’ of my reader. I vaguely think that people of my age, gender, race, etc. will be able to connect with my story to such an extent that I suppose my imagined reader is, in fact, me. A quite different me to the person who is writing the story. This was bought home to me when I recently started to record my own music. Once I had completed a set of songs, I would transfer them to my phone and listen to them. I did this partly to listen out for things I might want to change, but I realised after a while that I was listening to them because I enjoyed listening to them. I know this sounds terribly self-serving, but I will plough on. I listen to them as a listener. I have a link to the creator of the music partially because he is of a similar age, sex, and he shares a common musical experience and, of course, we share common tastes.
In an attempt to find more new music, I also recently actively sought out music from different cultural backgrounds. Now a lot of it I just didn’t ‘get’ as the musician’s background and, therefore, music were too different for me. I didn’t have any point of reference where I could appreciate the music. I could appreciate the talent, the proficiency on an instrument, but I couldn’t ‘enjoy’ the music in the same way I could appreciate a new piece of rock music for instance. I just didn’t have the commonality of experience, nor the intellectual/artistic experience to appreciate the work. I wrote recently about the experience I had of reading speculative fiction that originated from a different culture from my own. I actually enjoyed the notion of reading an ‘alien’ story from an ‘alien’ writer. That is a writer from a culture alien to my own rather than by an alien if you get my drift. Now clearly, I had enough shared experience (both the author and myself were human and male) and the novel had been translated into my language so no problem there. But what I found striking were the subtle cultural differences that made the story, about first contact, have an added layer of interest for me.
Clearly there is a unique relationship between the author and reader, even if the writer speaks a different language and hails from a different country. It is said that music in an international language. I could sit down with someone from a different culture, and we could make decent music together without needing a translator. I think that because readers of speculative fiction are used to dealing with different cultures, they have a better chance of appreciating the ideas propagated by writers from a different country. I think this is why anthologies that collect the work of writers from China or India, or wherever, are quite popular. You just do not get Chinese anthologies of murder mystery stories, not because people would not ‘get’ them, but rather because the readers of that genre, do not expect to have to deal with a load of cultural differences that may have an integral role in the plot.
Anyway, read widely. Listen widely. There is a whole world of stuff out there.

From Renascent by Pauline Yates

Pauline Yates writes speculative fiction, is easily led astray by comedy, and seeks stories for the soul. ‘Renascent’ joins a growing list of publications which include short stories with Metaphorosis, Abyss and Apex, Beta Noire, Story City Creatives and Every Day Fiction. She lives in Queensland, Australia and Tweets @midnightmuser1.
:

The Scalpers took my left eye today, but I wish they’d take my heart. Every beat holds me shackled to this existence and I want out. I give up trying to escape. I can’t find the right connection with any of my recipients. I can’t even rely on my soul. I sold that to the Scalpers the second I signed the consent form. My face may now be on a missing person’s list, but I’ll never be gone. I’ll live on in other people while my ghost remains here, on this recliner chair in this grey-walled room, for eternity.

From Wreck Diving by Joanne Anderton

Joanne Anderton writes speculative fiction for anyone who likes their worlds a little different. Her publications include the novels Debris, Suited and Guardian, and the short story collection The Bone Chime Song and Other Stories. She has won the Australian Shadows Award, the Ditmar and multiple Aurealis awards. Her most recent book is the children's picture book, The Flying Optometrist.
:

‘There,’ I whispered. ‘Saw one.’ I leaned my head against Matt’s shoulder and smiled into the smell of sweat and cologne. ‘And another.’
He wrapped an arm around my shoulders. In my red, corseted wedding dress I was beginning to feel the chill. But there was no way I’d go back inside, not yet. We stood alone in the darkness and looked up to the sky and the stars, falling.
‘Just for us,’ he murmured. I felt his voice rather than heard it.
They weren’t really. We’d planned the wedding to coincide with the disposal of decommissioned satellites, first broken into scrap, then cast down to burn in the atmosphere. As pragmatic a star shower as you could get. But there’s romance in a man who uses his work to fill the sky with diamonds for you.

L L Wohlwend is a writer living in Albuquerque, New Mexico. Her work has appeared in Midwestern Gothic, Strangelet Journal, Gravel, and other places. She occasionally blogs at llwohlwend.com and wishes whales (and other big-hearted creatures) were part of the conversation much more often.
:

I banged the dust pan on the edge of the waste basket. Black puffs of soot plumed in the trash. No one knew how long the cloud would last—the predictions before the asteroid were only guesses. Three months? Six months? A year? It had been five months so far, and a part of me had stopped believing the cloud would ever lift. But I knew better than to tell Howie that.
‘Cloud can’t last forever.’ I forced myself to smile.
Howie slammed the register shut. ‘Like hell it can’t. Think of the dinosaurs. This is the end.’