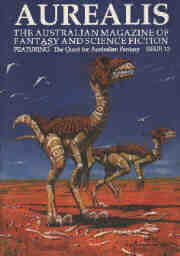 It should be a matter of pure unalloyed delight to SF readers that the Australian scene appears to be burgeoning at the moment. I will refrain from going into the details of all of the current releases, because you only have to look through this magazine and the various catalogues that abound to see that Australian SF and fantasy is enjoying something of a boom at the moment.

This was all forecast way back in our first issue when we expressed the hope that Aurealis would signal the birth of our own Golden Age. Whilst we still admirably deny any claim that we have sparked this interest single-handedly, we still like to give ourselves some kudos  at least for recognising a market trend and jumping on the bandwagon if nothing else.

As I write this editorial I am reminded that it is often mistakenly believed by readers and commentators outside the genre that science fiction is all about predicting the future. At the risk of contributing to that misconception, I will now attempt some forecasts for the remainder of this year. Given our previous success in clairvoyance, I feel that I can claim some degree of confidence in the accuracy of the following predictions, all of which will have something to do with Australian SF and fantasy.

1. Paul Voermans will win an award. I don’t know which award, but congratulations all the same, Paul. Well done.

2. Our associate editor, Michael Pryor, will contract a cold  possibly sometime in the winter months. Sorry Michael. I only call them as I see them.

3. There will be some sort of disagreement at a meeting of SF enthusiasts  possibly at a convention.

4. Horror writing will suffer at the hands of political correctness. How do you describe Dracula in a politically correct way? Dentally enhanced? Will werewolves be simply described as hirsute? Depilatorially challenged perhaps.

There you have it. The bonus of all this is that by the time you read this, some or all of these things will have eventuated thereby allowing you to sit back and marvel at my prescience. If, on the other hand, none of these things come to pass you can write or even take me to task in person. Possibly at a convention . . .

Looking down made him dizzy.

Mac Rusch closed his eyes and tried to pretend he wasn't sitting seven storeys above the street, maybe even that he was lying on his bed. But the roar of space around him, stone-texture pressing against his thighs and palms, and the acrid smell of the creature, were stronger than his imagination.

"Mmmh!" her husband replied ambiguously. Nearby, Mosca stood, hands clasped together in front of him, his face working at a smile.

"We'd love it here!" Margaret beamed and reached for Nathan's hand. His brief answering grip was firm yet gentle. Fondly, she ran a perfectly manicured thumb across the back of his hand. Dark hairs sprouted thickly through the deeply tanned skin. She was glad he'd kept these. And the little sickle-shaped scar on his chin. It was reassuring to have something about him that was familiar.

She'd been pleased when he asked her to keep her faded blue eyes. Pleased  and surprised that he'd want any reminder of the frail, tired body she'd left behind…

…"They look just like us!" David gasped in a half whisper. He had never seen a falsie before, and had only been told about them. He expected to see plastic, like a human cut-out with the same sharp rectangular edges like his plastic toy box, but the couple walking past them under the bridge looked like people he would see in the cells. They both had brown hair and wore clothes, beautiful clothes and kept together; and they were pacing in time like hands on a clock.

"They were designed to be as real as possible," his father replied shortly…

The cold sandy loam inside her brainpan was incapable of coherent thought. It could only store information, and play that information back behind her shut eyes in random surges of memory that occasionally corresponded with the heat of daylight.

A child cried on the ground above her. That information also was stored and played back in its turn…

…The sun dipped below the horizon and the sky behind her began to purple. She crawled closer to the retreating waves and lay down again, on her front. If she stretched out her arms, she could put her fingers in the sea foam that quivered on the sand, hard wearing like spit. She spat to see which would last longer. A wave took her spit away, but pushed the tan foam closer to her. She folded her arms under so as not to touch it.

The ocean broke open like a vein and the sea ants came out. Hundreds, perhaps thousands of black shiny bodies, catching the dying light and seeming beautiful for a moment, tumbling over each other in their haste to reach her…

Once upon a time there was a great big rich corporation. Its name was GORGE. And there was a young woman. Her name was Lorna deWitt. This is the story of how the young woman came to transform everything: herself, her Papa and Mama, the corporation  the whole wide universe.