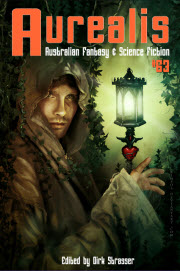 This month’s Aurealis brings on the aliens with Gerry Huntman’s ‘The Pillar of the Small God’, an alien contact story featuring communication problems, while Liam Pieper’s ‘Prophet’ provides the sort immersion that you may never disentangle yourself from.

The Pillar of the Small God – Gerry Huntman

From the Archives: The SF Hall of Fame – E Freeport Rickenbacker

Have you ever wondered what would happen if Earth was threatened by an alien race? Would all the petty emphasis on differences between us suddenly melt into solidarity for the human race? Would our unease with the otherness of tribes outside our own tribe lessen, while we focus on the aliens, and would our recognition of our sameness with all members of humanity magnify?

I suspect it would.

Not so good for the aliens, but a good outcome for us, I think.

A couple of recent events prompted me to think about this.

The first was the social media abuse at the first Muslim Minister in Australia's Federal Parliament, Ed Husic, swearing his oath of office on the Koran.

Some of the posts included: 'Labor you are disgusting, undermining our culture and country and constitution in this way', and 'I am totally disgusted!! Sharia Law next on your agenda is it?' Ed's response was dignified and measured, saying, 'There are people that are definitely extreme inside my faith and outside it and they will always seek ways to try and divide people. But it is important to not jump because of harsh words in dark corners.'

Why do we still have these 'harsh words in dark corners' filtering through our world and trying to divide us?

The second event that prompted me to think about the benefits of an alien threat was an unsettling Guest of Honour speech by the American SF novelist N K Jemisin at the recent Continuum in Melbourne. It began with the words 'My father was afraid for me to come to Australia.' Her father, she said, 'grew up in Alabama… dodging dogs and fire hoses turned on him and other Civil Rights protesters by infamous police Chief Bull Connor.' Her speech was far-ranging and more nuanced than I can do justice to here (the fulltranscript of her speech is on her blog), but the context for her father's fear was his studies of civil rights struggles around the world. She said, 'He understood that a nation which classified its indigenous people as animals less than fifty years ago might not be the safest place for a woman like me… with brown skin and a big nose and a tendency to tell people to fuck off when they get on my nerves.'

The vast majority of Australians would be mortified by anyone being fearful of coming to Australia. The White Australia policy and the treatment of Aborigines is an embarrassment of our history, isn’t it?. Can't we just leave it behind and forget about it? It doesn't have any bearing on modern Australia. If N K Jemisin could just spend some time here she'll see what we're really like.

And yet she was still fearful, only offering the qualification: 'This is not a safe country for people of colour. It's better than it was, certainly, but… well. Still got a ways to go… Now, before you tar and feather me, let me tell you something else I've come to understand in the past three days: Australia may not be the safest place for someone who looks like me… but it's trying to become safer.'

So, even in the 21st century, in what must be one of the most multi-cultural countries on Earth, the evidence of Ed Husic and N K Jemisin suggests there are still disturbing elements in Australia that are hostile to what they consider the other.

Bring on the aliens, I say. Preferably not an actual invasion, just the sort of contact that would unite us in face of an irrational fear and paranoid-perceived threat.

At least we're doing our bit to bring on the aliens in this month's issue with Gerry Huntman's 'The Pillar of the Small God', an alien contact story featuring communication problems with an intriguing race, and a translating device that doesn't work perfectly.

They trudged the sandy paths that separated the valley where they landed their ship from the Cyrani habitation they had chosen to Contact a month ago. Their suits were lightweight and highly manoeuvrable, life support systems set to filtration—there was enough oxygen in the atmosphere to extract, cool, and pump into the suits, but that was where any connection with a life-sustaining environment ended. Poisonous gases permeated the atmosphere and the average temperature for the planet was 65 degrees centigrade. Water was scarce and found deep underground in water tables. The only food was a fungus growing in and around the subterranean water reservoirs—nutritious to the Cyrani, toxic to humans.

'They've got a lot of bodies stacked in those weird basins,' Roe said, sliding back into conversation as they climbed the crest, providing a perfect view of the alien town and its notable landmarks. 'I'd like to get permission to study one of them—our sensors can only work out so much about their physiology from a distance.'