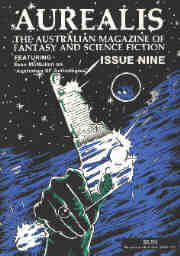 SF themes tend to run in cycles: hard technology-based science fiction is replaced in popularity by social science fiction (or SF with a conscience), High Fantasy succumbs to Sword and Sorcery. However, one theme or sub-genre tends to be more or less a permanent fixture, and that is Humorous SF.

Humour in SF is like the humour in any other genre. It has two functions: to entertain and to criticise. Terry Pratchett entertains. His Discworld novels are very funny, and of late — most notably in Reaper Man — he has taken to incorporating some criticism of various institutions. Douglas Adams sent up Space Opera in his The Hitch Hiker's Guide to the Galaxy trilogy (now running to five parts). He has also turned his considerable talent to pointing out some of the more curious activities of humans and their failings. SF provides fertile ground for parody; however, whether the author is targeting the human condition or society — or even reality itself as Phillip K. Dick does — the success of the work relies on one issue: Is it funny?

Humour is a difficult thing to categorise. What is funny for me may bore someone else. Pythonesque humour is not universally regarded as funny, but it is admired for its cleverness and originality. Not everyone enjoys Ben Elton's brand of sermonising humour. Good humour in SF is not simply about funny names and chaotic circumstances — it must have a depth to it. And a talented writer does not necessarily make a successful humorist. Take Robert Heinlein's "The Cat Who Walks Through Walls" and "Job: A Comedy of Justice" . . . please! You either have the ability or you don't. Happily we've provided some excellent humorous SF in past issues of Aurealis — mainly through the agency of Michael Pryor. His story, "Long Live the King", came a creditable third in our Readers' Poll. Watch out for another one of his stories in issue ten. And, of course, the SF Hall of Fame continues to be the first thing many readers turn to.

The real star of our second Reader's Poll, though, must be Simon Brown. His story "All the Fires of Lebanon" from issue six was a clear winner. As if that wasn't enough, his issue eight story "The Dissections of Machaon" was equal second. Paul Merrick's virtual reality story "Scoring" in issue seven shared second place. A number of other stories polled well and just missed out on sharing third place with Michael Pryor: Ashlei Kelling's "Paradise Discarded", Aziz Salim's "The Box of Sorrows", Denis Knight's "The Boy Who Believed in Dragons", Keith Walter's "The Crack in the Pavement", Rick Kennett and A. F. Kidd's "The Steeple Monster", and Aaron Darrell's "Trapdoor".

Meanwhile stories from our first four issues have been gaining recognition on the international scene. Greg Egan's "The Moat", which appeared in issue three, is the first story from an Australian magazine to make it into the prestigious Year's Best SF collection edited by Gardner Dozois. Another Aurealis story "Twenty-First Century Dreamtime" by Grai Hughes made it into the anthology's Honorable Mentions list. A further two stories, Stephen Dedman's "But Smile No More" and E. R. van Helden's "The Tourist" made the equivalent list in The Year's Best Fantasy and Horror anthology. A paperback collection of the first four issues of Aurealis, featuring all four stories, is now available from Chimaera Publications.

Most people have agreed that one of the main reasons for Aurealis' success has been its variety. Humorous SF is only one of the sub-genres that you will find in Aurealis nine. In her letter in this issue, Maureen Speller says she is attracted to Aurealis because of the "Catholic taste it exhibits". This is quite deliberate. In this issue we again run the gamut from hard science fiction to fantasy and from horror to humour. Even the Pope would have to admire that sort of Catholicism.

…Hello? A single word, centre screen.
What do you say to someone who had just been killed?
Do not be alarmed, Mr Weldon.
I can't see.
I am sorry to tell you that your original was killed this evening, Mr Weldon. You have been loaded into a simple VDU.
I… What? How can… I don't understand.
It was strange seeing the man's mumbled words reproduced as text. I need you to pay attention, Mr Weldon. I have something very important to tell you. You are being held hostage. This VDU is set to explode if anything happens to me.
There was no answer — no expression to read.
Mr Weldon?
Yes.
Do you understand?
Yes.
Good. Now tell me about the Personality Recorder…

Saint Sebastian and the Mona Lisa – A F Kidd

…"Father, tell me, are there demons that can render a man weak as a babe when he wakes in the morning?"

He was surprised to see the good Father make a thoroughly pagan sign against evil. Almost, he laughed — but it was with great seriousness that the priest asked him the reason for his inquiry. Giaiotti pulled his shirt open at the neck and the old man's eyes widened in what seemed sheer terror. He seized the painter by the arm and virtually dragged him into the church, pushing him to his knees at the alter.

"Be silent. Wait there."

In a short while the priest returned with a vessel of holy water, the contents of which he tipped, without ceremony, down Giaiotti's neck. The water was freezing cold, but it was more than that which knocked the painter backwards. He sprawled on the floor, pawing at his neck and chest where no wounds now showed…

In His Own Image – Graeme Menzies

…Sam looked at the top row of video screens and saw the artificial sun coming into view over the horizon.

He pushed a series of buttons so that the large screen would automatically alternate between the three villages of AWE. Artificial World Experiment was the official name of the project, but it was more commonly called Wonderland…

It was in Gunumelung, the lightning season, the season of dry lightnings, that the old ship came out of that strange stony land once called Kakadu before it all changed and the northern deserts ran on to the sea. It travelled south until it came upon desert of a different kind, the redder, more total desert of the centre…

The form-fitting couch surrounded him, supported him, engulfed him. It was attached to him, and he to it, yet he was unaware of it. It didn't exist for him. All that was truly relevant was the matter-matrix, multi-layered and garishly coloured within his head, the pressure pads on his hands telling him to speed up, or slow down, or stop, and the nodes of the matrix which he kept moving, rotating inexorably, impossibly.

For David Jannsen was a Shifter. And within his mind lay the power to move mountains.

Or, at least, a suburban train…

The Beast will kill me tonight. Fair warning has been given. If I were to run, he probably couldn't catch me. This is, of course, the dilemma. He has no particular wish to kill. It's just a question of hunger…

Moving with the Herd – Geoffrey Maloney

…The Pantons display no signs of intelligent life. I suggest, as I have suggested many times before, that they would make an excellent source of protein. Their rumps could be carved and fried and no doubt served as choice steaks in elite restaurants on many of the habitable worlds. Their ribs — spare-ribs — likewise would make a sought-after delicacy.

I attach the details of the reports on the hormone levels of the herd, and other more objective scientific data that I have collected, the things that they really want, not my subjective musings which serve no purpose whatsoever other than to help me pass the time. I shoot the whole lot down the Tesseract where it will be received moments later by my supervisor at the Institute, many light years away. I suspect that my supervisor thinks I'm serious about the steaks and the spare-ribs, but really I don't care. I don't care about anything much. I just put those things in because I know he doesn't like it…