View Cart “The Black Crusade” has been added to your cart. 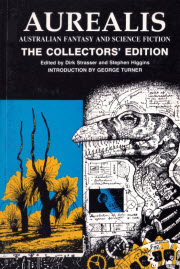 It was dark. It had always been dark. Yet something had changed, something that mattered. The warmth gradually slipped away, leaving an aching coldness. The beating, too, grew faint as alien sounds overwhelmed it. This place was hard, aloof; it stole the softness, petrified it, assaulted it. Still it was dark.

And it was into the darkness that the scream called.

And it was into the darkness that the other screams followed.

And it was in the darkness that the mother died, like all the
others.

The man-who-grew-old knelt down beside the baby, taking care not to drop the stones he had collected. He stared at it for a ment, and then slowly began placing the stones in a circle around the baby. It didn’t open its eyes when he gently slipped his fingers under it and lifted it out of the circle he had created. As he cradled the sleeping child in his arm, he placed the remaining stones in the shape of a cross on the spot where it had lain.

When he spoke, it was softly; for no one else need hear.

The man-who-grew-old sighed. He stared at the two large moons; his eyes followed the familiar constellations across the arc of the night sky to the horizon behind him. He spoke again as he turned away, trying to shield the baby.

“I will call you Fleet, and you will run faster than the wind. Sleep, little one, for you will never know rest like this again. The time to run will soon be upon us once more.”

With the baby still sleeping in his arms, he began walking. The two moons hung over his right shoulder.