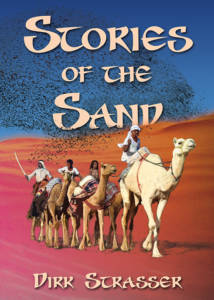 Stories of the Sand

In this evocative collection of short fiction Dirk Strasser shapes eighteen stories suffused by the sands of loss, understanding and redemption.

“Dirk Strasser is a master practitioner of what is, to my mind, the perfect form – the short story. This complex and intelligent collection showcases his long-honed subtlety and control, offering such gems as the haunting and delicately structured ‘Waiting for the Rain’, and the incisive ‘Watching the Soldiers’. Like all the brightest stories, these leave an indelible after-image in the minds’ eye, through which you must ever after view the mundane world.”
– Isobelle Carmody, author of The Kingdom of the Lost and The Obernewtyn Chronicles

“Dirk…  is a writer right down to his bones. That’s where the ego vibrates. That’s where the soul-fires burn, and you don’t have to trust me on this one because you have the proof right in your hands, this man can f—ing write!”
– Jack Dann, winner of the Nebula and World Fantasy Awards

The sands started speaking to us on our eighth morning in the Red Desert. At first it was a soft lisp of air and heat, but as the day progressed the sounds coalesced into ghost-words that danced on the cusp of meaning. I’m sure I was the one who heard them first. I looked around at my three companions, searching for a sign that the murmurs were a portent that we were closer to our goal rather than proof that I was falling into heat-madness.

My gaze traced the tether behind my camel to Shemselnar, who was sitting unresponsive as ever on her mount. Her slight body seemed even smaller against the vast red ocean of sand behind her, and as usual it pained me to look at her. Impulsively I locked my eyes onto the two empty sockets where hers should have been. Why didn’t I feel I was looking at her until I saw those two empty pools? Wouldn’t it make as much sense to stare at the soft waves of her brown hair or her unlined forehead or her tapered hands? They were all Shemselnar. What was it about the eyes that commanded they be the centre of being? Oh Shemselnar. I felt my body succumb to a shudder. Surely you can hear the sand-voices? Show me in some way that you have.