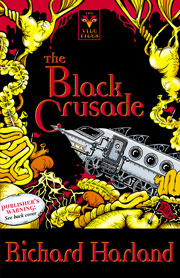 The story takes place in 1894, and tells of a Hungarian bank clerk, Basil Smorta, who falls hopelessly in lust with Volusia, aka ‘the Australian Songbird’. He follows her across Europe in company with a group of Fundamental Darwinists led by Lord Malicide Sain. They pursue their ‘Black Crusade’ at first by cart and carriage, then in Ingel Brankel’s Mobilator.

One bizarre and gruesome adventure follows another. The Ordeal of the Five Senses in the monks’ lavabo, the excruciating apotheosis of Brother Dragorian, the doting love of the Love-Vampires, the bomb-throwing police force of Orblast, the sleep-tranced villagers in Morbol Villica and the sarcophagus of the Great One, the legendary marquis himself.

A SILENT ORDER OF MONKS IN THEIR LAVABO

I passed many doors and a few windows, but never a gleam of light from within. I was at my wits’ end, when I heard a faint swish-swish of sandals in the dark.

The swish-swish halted, then came towards me. All I could see was the shadowy outline of a robed figure. He caught me by the sleeve and started to lead me along the corridors.

‘Are you taking me back to the visitors’ quarters?’ Instinctively, I spoke in a whisper. ‘I was looking for our transport vehicle.’

No reply, only a more urgent tug on my sleeve. I became aware of a growing sound, a dull muffled clamour like the roar of an ocean. A smell too—foul and ripe and excremental. The noise grew steadily louder, the smell grew steadily stronger.

Then my guide came to a halt, so suddenly that I bumped into him from behind. A chink of light shone from under a solid wooden door.

‘Where are we?’ I demanded.

By way of answer, he flung open the door. I blinked in the brightness of a hundred candles.

It was an incredible scene. Looking in through the door, I could see a large vaulted hall divided by low partitions into a hundred cubicles. A hundred sitting squatting monks occupied the cubicles. They were all busy conversing with their neighbours across the tops of the partitions. The hubbub of their voices broke over me like a wave.

The smell broke over me too—an abominable overwhelming stench. I clapped my hand to my nose, staggering under the impact.

My guide nearly ripped my sleeve in his hurry to pull me inside.

‘This way, quickly! See, there, two empty places side by side, follow me!’

It seemed he was suddenly free to speak. I had no time to consider the mystery. He led me across the hall, like weaving our way through a maze.

The other monks paid no attention to us. The cubicles were without doors and they sat in plain view on their toilet seats. I tried not to stare but I don’t think they cared anyway. They were yammering away about every topic under the sun: today’s dinner, tomorrow’s mass, the gardens, Brother Jonas, arthritis, favouritism, privileges. It was a non-stop barrage of sound.

We arrived at two adjoining cubicles and sat down on our respective toilet seats. We were side by side but facing in opposite directions.

‘Lower your breeches and pass something,’ ordered my guide.

‘This is the lavabo, it’s the only place in the monastery where the rule of silence doesn’t apply.’ He spoke rapidly, hardly pausing for breath. ‘We’re only allowed to stay in the lavabo as long as we’re passing something, for example, evacuation of the bladder, evacuation of the bowels, passing of wind, so try to make it last and do it very, very slowly.’

For appearances’ sake, I lowered my breeches—but nothing more. I didn’t intend to obey their ridiculous rules.

‘It’s lucky I found you, only by accident, let me tell you about myself,’ he began immediately. ‘I’m Brother Matthias and I’ve been here ten years, ten years ever since I was an adolescent and I’ve always kept to my vows but it’s difficult, very difficult, when you’re dying to let out the words inside you and you have to fight back the urge even though it becomes overpowering when the words build up—’

I tried to interrupt, but my sentence was drowned out by his flow of gabble.

‘I was looking for the Mobilator!’ I yelled full in his face. ‘Our transport vehicle!’

He blinked and paused for a moment. He was leaning with one elbow on the partition between our cubicles.

‘There’s a woman imprisoned inside!’ I went on. ‘A woman in an iron box!’

‘Did you say woman?’

‘Of course she speaks.’

‘I need to talk to her. I need your assistance.’

‘Ah, if only a woman would speak to me! Oh, to hear her feminine syntax and elegant enunciation! Ah, to hear her vocalising her syllables!’

‘And the words slipping forth from her open mouth! Organ of speech, movements of the tongue! Oral articulacy and loquacity in the vernacular! The fullness of her plosives, the modulation of her vowels—’

‘The fluent and sweet volubility of her! Oh, to engage her with phonetic interjections! Vocal effusions and mutual intercourse! Colloquy, chat, parlance, palaver, allocution, dialogue! If only a woman with her lips, she to me, orally uttering, if only…’

It was hopeless. He was in an ecstasy of logorrhea. Faster and faster the words spurted out. His cheeks were bulging with all the words he hadn’t yet managed to release.

I pulled up my breeches, rose from my toilet seat and left him there. I don’t know if he even noticed my departure, gabbling away to himself. I zigzagged through the maze of cubicles back to the door.