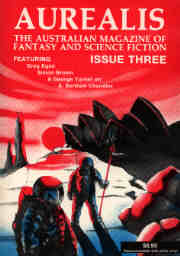 In this, the third issue of Aurealis, we are again pleased by the quality and variety of stories which we have been able to present. We are especially encouraged by the number of new writers who are appearing in these pages. From the very beginning, we wanted to avoid relying on a stable of established writers. Of course, some names will crop up a number of times  and hopefully this will indicate that a new writer is becoming an established one. If this occurs, Aurealis will be performing one of its intended functions: to discover and encourage new talent. As these writers develop, they will fulfil another one of our aims as far as our readers are concerned: to entertain.

Several of the authors in our first issue have already met with some success as a result of appearing in Aurealis. Three of the stories will be reprinted in various collections and anthologies later this year. Congratulations in particular to Geoffrey Maloney for his pending appearance in the Edgewood Press Best of the Rest anthology. He is one relatively new writer who is well on his way to becoming established.

The stories in this issue will make you think… they will make you feel… they will make you wonder. They give glimpses of worlds and societies which may one day exist. Whilst the stories are entertaining, they should not be regarded as mere escapism (not that there is anything wrong with escapism). Any speculative fiction calls for the author to question  whether the object of his questioning is his society or his feelings or his hopes.

The classic question that writers of science fiction and fantasy are supposed to ask is: "What would happen if…?"

The following stories show what happens if…

Read them  be entertained!

I'm first into the office, so I clean off the night's graffiti before clients start to arrive. It's not hard work; we've had all the external surfaces coated, so a scrubbing brush and warm water is all it takes. When I'm finished, I find I can scarcely remember what any of it said; I've reached the stage where I can stare at the slogans and insults without even reading them…

"Another one… another one…" they whispered to themselves.

Amongst the sea of small, hungry faces; amongst the waves of outstretched hands, the Tourist pushed. Past the rattling of the legless female's tin. Past the moanings of an ancient male with festering eyes…

Is There a Fate Worse Than Death? – Marilynne Cromarty

…I'd hardly finished eating when my visitors arrived. They were an impressive-looking bunch by Balkin standards. A desiccated old guy wearing a fancy gold necklace introduced himself as the President of the Council and launched into an involved rigmarole about galactic harmony and interstellar relations or some such thing. I couldn't figure out why I rated a delegation like this; the contract wasn't that big, and I'd just about run out of my stock of polite platitudes when he finally came to the point. It seems this Festival of theirs needed some sort of king, and as a distinguished member of our galactic brotherhood  I'm not kidding, that's what he called me!  I was being offered the job…

…The councilroom was cluttered with journalists and their equipment and the sort of unidentifiable people who seem to hover around individuals who have power. The proceedings were heating up. The exo-ecologist, Banerji  a small, dark man  bristled with hostility. "Your obscene drills  stuck into this planet like giant proboscises: this world has been unchanged for millions of years! What right have you to remake it?"…

In the dream it is always the same.

Running down the street, late at night, past the empty car parks, past a deserted shopping centre, into the alley, up the old stairway, through the large green door with the sticky lock, and into the flat. Safe. Home…

…"My family has been kidnapped, Mr Purdom, and I have been forced to work for you to develop nanotechnology. Ransom is exactly the word for it. Well, I've done what you want. Nanotechnology now exists, and I want my family back…"

The Day of the Sun – Maria McKernan

…Heat. It is hard to describe heat; it is a word not understood.

The catastrophe to the world had happened in the times of plenty and waste, when the people were free and enjoyed the luxury of laughter. The wonder of heat. The ability to remember…

In Kalishandra, the city of lost travellers, the city in the abyss, darkness has form. In the mist that rises periodically from cracks between the cobblestones, it has life. Melt-mist, the shaper, drifts along empty streets, welling into deep, choking pools in forgotten courtyards. It breaks in ephemeral smoke waves upon the stark stone walls of towers which protrude above its curling tendrils like strangely envisaged nightmares. These bleak, inhospitable eyries are the lairs of dark and terrible wizards, beneath whose hard and stony gaze Kalishandra shifts. Streets change. Walls stand where before there was but open space. Courtyards once remembered fade into obscurity. Old things disappear, are misplaced: here a statue, there an ornamental fish pond. Even older things return. The smell of a river long thought lost  blood upon the cobbles. It continues…

…"We are going to make a very large cut," the surgeon announced from behind his mask.

"Enough to remove your little finger."

"Shit. Aren't you going to give me an anaesthetic?"

In an instant it was all over…

It was dark. It had always been dark. Yet something had changed, something that mattered. The warmth gradually slipped away, leaving an aching coldness. The beating, too, grew faint as alien sounds overwhelmed it. This place was hard, aloof; it stole the softness, petrified it, assaulted it. Still it was dark.

And it was into the darkness that the scream called…