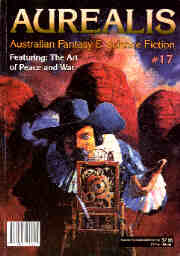 How to write a story that Aurealis will accept in one easy lesson:

Well, it's not quite that simple. We have recently received a lot of stories from people who have become aware of Aurealis through various Writers' Centres throughout Australia, in whose publications we advertise. As a consequence, many of the stories submitted lately contain clichéd plot lines, weird science, and very un-fantastic fantasy. The fact that we are reaching people who have not previously had an interest in SF or fantasy is pleasing. The fact that so many writers feel that "anyone can write that stuff" is not. Science fiction is not hard to write if a) you can write, and b) you know a little about science fiction. It is the same for romance, westerns, crime fiction. You have to study the genre, if only to get a feel for it. Many people would argue that this may destroy the spontaneity of the piece. It won't. It will, however, with enough knowledge of the genre, let you know that calling a gun a "laser" does not a science fiction story make. You will see that smartarse robots are old hat; that having a computer possessed by the devil is not a stunning new twist. You will see that SF is not the SF you read as a child.

Plots like these have appeared in stories that have been submitted to Aurealis recently. And not just once. It is surprising how many people independently come up with similar ideas. For example: a group of people witness an alien ship land. The aliens come out of the ship and the people are horrified at their appearance  they only have two arms! They are all soft and pink! They have a horrible, slobbery, moving, pink thing that lives in their mouths! Yes! The "aliens" are really humans! The onlookers are the ones not of this earth, and they wave their tentacles about in much distress.

When writers first come up with this idea, I am sure that they wonder why no-one else has thought of it first. The trouble is … someone did. And they thought of it years ago. This is what happens when you don't know your market.

Aspiring SF writers should read a lot of SF. They should read classic SF and new SF. They should read good SF and, while they are at it, they should probably read bad SF … just for the fun of it. The same goes for fantasy and horror. If you want to work in the field, know the market. If you want to get published in Aurealis, read Aurealis. Not just the letters and the funny bit at the end, read all of it. Study it. You want to know the type of stories we will buy? There is a sample of them in these pages. You want to know why your story was rejected? Compare it to these ones. Look at the characters. Are they well developed? Are they consistent in their actions and thoughts? Is the dialogue natural? Look at the plot. Does it make sense? Is it logical? Is it plausible? The fact that you may be portraying an implausible event does not let you off the hook. You have to make the implausible seem plausible. You have to get the reader to suspend disbelief. This is, of course, old news to successful writers. They will not have even read this far. That is why they are successful. They implement the rules, both written and unwritten, of writing. They have studied their craft. If you want to get published in Aurealis (and an awful lot of people do) keep reading. And read closely. Good luck!

The Service of the Dead – Stephen Dedman

You don't see many zombies in Port-au-Prince, except for an occasional glimpse of the General's bodyguards in the Place des Heros, or a truckload being shipped out from the Casernes Dessalines. Further away from the cities, you may see them working on the roads or in the fields, but it's here in the mountains where they're at their most useful. At least, that was what I'd always been told. Sitting in one of our few working jeeps and staring through ancient binoculars as they trudged into what the tonton macoutes claimed was a hideout for collaborators, I wasn't so sure…

They first appeared at the time of the golden skies. Mikhael saw them marching across the cloudless heavens: bright skins glinting like frosted glass, feet flashing in buoyant rhythm with each step, and hair flowing like filaments of sunlight. And by their sides marched great beasts with scales of rich leather and eyes like soft golden flames, beasts with powerfully muscled bodies and gentle faces. Although the marchers seemed as impossibly distant as stars, Mikhael felt the soft breeze of their breaths on his face, and he heard their strange, incomprehensible call filtering through the air…

"What?" I looked at her. She looked down at her hands.

"I need some fluid from your eye," she said after a minute. I waited for her to go on. She didn't. After a while it clicked.

"You're a 'Baller, aren't you?" I said slowly. She nodded, then looked up at me fiercely, the look in her eyes enough to burn flesh.

"You've seen so much with your eyes," she said urgently. "I'd give anything to see with them…"

…Lori woke in a void empty of all life and movement. Her belly felt gravid and heavy in the stillness, and she clasped her hands to it and held herself. She was naked. The thought confused her for a moment, and then she realised and screamed.

She pinched herself hard and cried with the pain. No sound. Her skin felt more tender than after the most severe sunburn. Her nerves screamed. She felt a kick in her distended belly and clutched her hand over the place like it was precious. In moments she had become more like nine months pregnant than three. The most precious and difficult six months of her pregnancy had disappeared from her life. She felt the loss terribly, like an emptiness in her own mind…

…Jack reached out and stroked Melanie's long, brown hair. He could still smell the sandalwood. She'd always smelled of sandalwood. Her lingering scent had haunted him on countless nights. But the host tree had already claimed her…

With an Enigmatic Smile – John Ezzy

…La Gioconda flicked a bud of confectionery into the air, caught it skilfully between her lurid lips, and briefly crunched it to death. She continued. "That's why I have to send you little treasures down The Loop. Back to 1998, in fact. A rather unimportant Australian town in the central west of New South Wales. Colberine. Just under twelve thousand people lived there at the time, none of whom had any particular historical significance. (This situation might have been much worse.) But they were not  in the history we would have chosen  murdered in their sleep by a T-W-W-S-N-C officer. Good old Henry, who you all know at least passingly, stole a Wells Cube, and Spiralled Down the Loop with a box full of brain charges. These he immediately detonated, killing all animal life within a four kilometre radius; with the exception of himself, needless to say. Our records will have to be altered because of this crime, which is pretty fuckin' unfortunate. 'Every alteration', as the saying goes, 'is a knife in da Vinci's heart'. So, my friends, you will go after Henry, question him, and find out exactly why this occurred. Then, when the information has been extracted, you have my authority to kill him. It doesn't have to be quick, if you don't feel particularly merciful…"