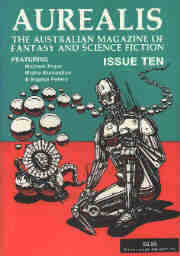 What percentage of SF readers are also potential SF writers? I don't have the answer, but studies have shown that if you are an SF reader, you are much more likely to have a go at writing than if you were a reader of detective fiction  or a reader of any other genre for that matter. There's obviously some relationship between SF and would-be writers.

Firstly, some good news for all the writers out there. Thanks to an Australia Council grant, we will be almost tripling our payment rates for issues 10, 11 & 12. Secondly, to all our readers: our new publishing schedule for 1993 consists of this Dec/Jan issue, issue 11 in June, and 12 in December. And while I'm addressing potential contributors, let me suggest a few "Don'ts" which may save time all round:

1) Don't send us a story which is too short or too long. Our guidelines are clear on our word limits. A story less than 1,500 words has no chance of being published. We now take stories up to 6,000 words, and we probably wouldn't baulk at 6,200, but please don't send us your novelette or novella.

2) Don't give a synopsis or "explanation" of your story in your cover letter. If you feel your story needs to be explained, then I would suggest there is something wrong with it in the first place. A story must stand on its own. Synopses for short stories are also counter-productive. Most stories simply sound awkward and uninteresting in synopsis form. Also, knowing what a story is about before you read it takes away much of the tension and conflict.

3) Don't tell us that you know your story needs further work, or that it's only a first draft, or that you know that you have a major spelling and grammar problem, or that this is the first story you've ever written and you're not happy with it, or that all the other editors who have rejected it have been incredibly stupid because they've missed something.

4) Don't insult the publisher or the authors of previously published stories in your cover letter. A recent potential contributor managed to break rules 3) and 4) in one hit when he wrote, "I realise that the story I'm submitting is amateurish, but I believe it is on par with other first-time stories that you've published." How to win friends and influence people!

The other side of the coin, of course, is the growing list of writers who we have published. I've lost count of how many first-time authors have appeared in Aurealis. Read the bios at the end of each issue  you may be surprised. We must be close to some sort of record for a professional short story publication. One of our explicit aims is to encourage new writers. We ask for re-writes when we feel the story warrants it, and authors are given every opportunity to come up with an story we consider acceptable.

And what's more, every story which has appeared in Aurealis  whether written by a first-time author or not  has been included totally on its own merit as we see it. So where have all these new authors been hiding all this time? How many people have been scribbling away all these years without any idea where to send their works, or how many have had vague inklings that they would like to write some SF but have never been motivated because they didn't know what to do with it? Aurealis does not commission stories  and I suspect there would be very few professional magazines which could say that. We rely totally on unsolicited manuscripts. To that extent, at least, we have always been a writer's magazine.

Chimaera Publications' other magazine, The Australian SF Writers' News, has generated a great deal of positive feedback through the past year. We want to thank the many writers and potential writers of SF, fantasy and horror who have written to us to thank us for including the ASFWN free with their 1992 subscriber copies of Aurealis. Editor Steven Paulsen has done something which needed to be done for a long time. Through his efforts he's produced publication which some of us would crawl across a nuclear waste dump for. Which large Australian publisher is looking for fantasy novels? Which Australian magazine is currently paying up to $1050 per story? Which publisher is putting together the first mass market anthology of Australian horror? Who are the Australian authors who are selling to the big-paying markets overseas? If you had copies of the first four issues of ASFWN, you wouldn't be wondering.

Since the ASFWN will now no longer be free, we're obviously keen to see what percentage of our readers are writers as well. And if some of what you've just read sounds to you suspiciously like a "plug" thinly disguised as an editorial, you're probably right.

…Lautrec stopped, but didn't turn around.

"Wanker!" he said, using that phoney French accent of his.

Wank-air, is how it sounded.

"Leave my vids alone!" I shouted. "They're none of your business."

"What do you know? You don't get lonely. You don't need anybody. You're just a bot! A cog in a machine!"

Lautrec turned his flat metal face toward me. "Monsieur, you are ze cog."

I should have stayed in bed. You simply can't argue with a Multinode 5-09…

…Sitting opposite his father, Daved shifted and scratched uncomfortably.

"Daved, you know as well as I do that this is your mother's ship. We don't know that she's on board. And if she is, she won't want to stay. But she might want to take you with her." Daved saw his father's face go harder than he had ever seen it. His dark eyes grew darker, but his voice stayed quiet. "This must not happen. I will never let her take you from the Black Castle. One day you'll be Lord here, and you have to give the people a future then. Without you, the Castle is nothing. We are its masters and its prisoners; we have a duty. Daved  look up  do you understand?"…

Too Much to Remember – Janet Fennell

…"It took us billions of years to get here; it could take billions to go  but we could go tomorrow. You have unexpectedly quit your application. Will the globe stop spinning next week? Not enough memory. In a month we forget our humanity  who we are, how to breathe. Data overload.

The fog became thicker as the car sped further from the city. George eased his foot off the accelerator, and the car hummed along the highway marginally slower. There was really no hurry, he knew, as the ferry operated twenty-four hours a day. All he had to do, he reminded himself, was cross the river into the next state and he was home, free and safe. He had finally hit the jackpot…

It's All in the Way You Look At It – Michael Pryor

Brian Delzoppo was vain, erratic, arrogant, self-centred and stubborn. In most occupations, those qualities would be considered a handicap, but to Brian they were a positive boon. Brian was an Artist…

By Stars Above – Blair Hunt

It was an afternoon like any other in The Busted Shuttle. Doc was behind the bar, dreaming about rich tourists, and Crazy Lester and me had settled into our usual spot, while outside the tropical sun was bringing the island to a slow boil…

…Shahriar's voice trailed off as the stranger turned. The face was a young man's, but ageless in its chill beauty; the skin was pale as starlight, the hair as dark as the night sky, the eyes a deep and compelling blue for which Shahriar could find no comparison.

"I am no stranger, Shahriar," came the quiet voice. "You know my name."