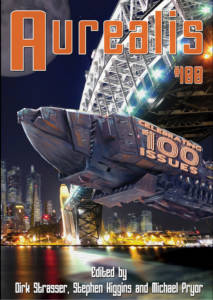 Aurealis has reached a milestone very few science fiction and fantasy magazines reach. This is our hundredth issue. We have gone back and contacted everyone who appeared in Aurealis #1 in 1990 and asked them for a new story. Strap yourself in and get ready to be blasted into a strange place that is somehow both the past and the future.

This is the digital version. A special print edition is also available.

Who would have thought on that fateful day in 1990 when Stephen Higgins and I decided to launch an Australian fantasy and science fiction magazine that we would still be here 27 years later publishing our hundredth issue? 1990 now seems another world away.

In 1990 Tim Berners-Lee published the first webpage, Nelson Mandela was released from prison, the official demolition of the Berlin Wall began, the hole in the ozone layer above the North Pole was discovered, and the first in-car GPS went on sale. It was the year when the top 50 movies included 6 science fiction and 6 fantasy movies such as Total Recall and Edward Scissorhands, the Sci/Fi Channel started transmitting on cable TV, the Hugo for Best Novel went to Hyperion by Dan Simmons, and the Ditmar for Best Australian Short Fiction went to Terry Dowling’s ‘The Quiet Redemption of Andy the House’.

It was also the year when Aurealis #1 was published.

Homegrown science fiction and fantasy in Australia at the time wasn’t exactly flourishing. Until we launched in September 1990, no Australian magazine that year had published any Australian SF professionally, and the major Australian publishers weren’t publishing any SF novels. We decided to do something about it. But rather than launch the magazine with a lament about the parlous state of Australian SF, we decided instead to herald the Golden Age of Australian Science Fiction, a cry that Harlan Ellison picked up on a number of years later in Jack Dann’s ground-breaking Dreaming Down-Under anthology.

As part of our plans for Aurealis #100, we decided to go back and contact everyone who appeared in Aurealis #1 and ask them for a new story. The first story we ever accepted for Aurealis was David Tansey’s ‘And They Shall Wander All Their Days’, a classy hard SF space travel story. David Tansey was at one point the author with the most Aurealis credits, but he has only recently come out of a twenty-year writing hiatus. Based on the quality of his clever, insightful and funny story ‘The Cavity’ in this issue, we’re all hoping he finds the time to continue his return to science fiction. Michael Pryor’s ‘Talent’ was the first story to appear in Aurealis #1. As most of you would be aware, Michael is now not only one of the co-editors and co-publishers of Aurealis, he is also one of Australia’s most acclaimed SF authors and a much-loved writer of Young Adult and Children’s books. His story in this issue, ‘Shimmerflowers’, is a powerful and dark tale of lost innocence.

Terry Dowling has also been going strong in the 27 years since his Aurealis #1 story ‘In the Dark Rush’, and we’ve included his new story ‘The Madlock Chair’, a mind-blowingly original piece which creates a sense of the truly alien. Alex (formerly Sue) Isle’s story ‘Nightwings’ appeared in our first issue, and his contribution to Aurealis #100 is the zombie story ‘All We Have Is Us’ set in the most isolated capital city in the world. Geoffrey Maloney’s contribution to Aurealis #1 was ‘5 Cigarettes and 2 Snakes’, and in this issue we are pleased to publish the funny, surprising and more than a little creepy pastiche of the Victorian sensational novel, ‘The Bewitching of Dr Travidian’. Stephen Higgins (‘Forest/Tees’) and I (‘The Mandelbrot Bet’) have contributed stories of our own for the first time in many years. For various reasons, we were unable to contact the other three authors that appeared in our first issue: Dianne M Speter, Jai S Russell and George Turner. Since we now publish an overseas story in each issue, we have also included the poignant, magical (and appropriately named for our May issue) ‘Mayfire’ by Seattle-based science fiction and fantasy writer, Rebecca Birch.

Whereas issue #1 contained an interview by me with Australian SF’s Grand Master, George Turner, issue #100 has an interview by CP Large with me about the history and future of Aurealis. Terry Wood also looks at the surprising possibilities of future technology in his article ‘Robotics, AI and the Impending Techno-Apocalypse’. Book reviews only became a regular feature of Aurealis after the first issue, but Aurealis #100 has our usual reviews of recently released SF/F titles. While our first issue featured the quirky and hard to categorise ‘Science Fiction Hall of Fame’, now we have the next instalment of the even quirkier and harder to categorise ‘Secret History of Australia’.

The final words of our first editorial were ‘Australian literature has never had a Golden Age of fantasy and science fiction. Perhaps it is shining just up ahead.’ Little did we know when we wrote those hopeful, fateful words way back in 1990 that we would in 2017 be confirming that prophecy in our hundredth issue. We are now right in the middle of that Golden Age.

Thanks to those of you reading this, for joining us on the world-spanning ride to the future we’ve been on.

All the best from the Golden Age.

From The Cavity by David Tansey

David Tansey was the first person to have a story accepted by Aurealis, and had four stories in the first six issues.
:

From Wikipedia, the free encyclopaedia

Your donation will assist our work

The Cavity (also known as van Bierlee’s Vacuole) is a spherical structure approximately 1200 kilometres across, about 600 kilometres below the surface of the Earth. It lies partly under the Southern Ocean and partly under the Australian mainland. It was discovered in 2028 by a team led by Dutch geophysicist Boots van Bierlee during seismic sounding of the continental shelf as part of a manganese nodule mining operation.

From Shimmerflowers by Michael Pryor

Michael Pryor is one of Australia’s most popular and acclaimed authors of fantasy and science fiction. He has published more than thirty-five novels (including the Laws of Magic series, Machine Wars and 10 Futures) more than fifty short stories, and has over one million words in print.
:

The shimmerflowers were my idea. It took me ages but I found some up on the crag. Old Marda said that shimmerflowers were killing us because they used water that should have gone to our crops but she says everything is killing us so what’s the difference? Anyway Juleen looked pretty in her Vigil gown barefoot and holding the bunch of soft and white and puffy shimmerflowers on the rock in square in the middle of town waiting for her companion.

From The Mandelbrot Bet by Dirk Strasser

Dirk Strasser's fiction—including his fantasy trilogy The Books of Ascension: Zenith, Equinox and Eclipse and stories in his Stories of the Sand collection—has been translated into a number of languages.
:

‘There are lines which are monsters.’

From The Bewitching of Dr Travidian (A Romance) by Geoffrey Maloney

Geoffrey Maloney lives in Brisbane. His story ‘5 Cigarettes and 2 Snakes’ appeared in Aurealis #1.
:

A lean young man, dressed far too elegantly for the neighbourhood he was in, staggered along a narrow street of sad rickety houses. He held a handkerchief scented with rosewater to his nose to guard against the odours of the open sewer. With barely enough moonlight to guide his way, he would stop occasionally and squint at the numbers scrawled in chalk upon the doors, mumble to himself, then move on.

From The Madlock Chair by Terry Dowling

Terry Dowling is one of Australia’s most respected and internationally acclaimed writers of science fiction, dark fantasy and horror, and author of the multi-award-winning Tom Rynosseros saga.
:

They had been eighteen leaving the Baylieu Gate, fourteen by the centre of the Gadarene Spread, twelve at Quitmus, nine by the outer precincts of the Indra Circle, but seven, only seven, when they reached The Madlock itself.

From All We Have Is Us by Alex Isle

Alex Isle [name and gender change from Sue] lives in Perth and plans its (fictional) destruction on a regular basis.
:

Ella never had a real job before the end of the world. Now she scavenged through the city’s once-rich houses to pay her way. This house had been gone over before, but people of her youth and small size often had to settle for remains.

From Forest/Trees by Stephen Higgins

Stephen helped to get Aurealis off the ground and is inordinately proud of all that it has achieved. He has had a few stories published and the odd play performed.
:

‘Do not think for a minute that I am happy about this,’ Tier said. ‘I’m supposed to be on a flight for a meeting.’

Alan checked the comp again. There was definitely no power connected to it. He had a thorough rummage around the back of the comp and ensured that there were no leads at all. There wasn’t. There weren’t even any unplugged leads.

From Mayfire by Rebecca Birch

Rebecca Birch is a science fiction and fantasy writer based in Seattle, Washington. She’s a classically trained soprano, holds a deputy black belt in Tae Kwon Do, and enjoys spending time in the company of trees.
:

Eilis huddled in the last thin beam of daylight angling through the window of her father’s cottage, feverishly working the shuttle of her lap-loom with trembling hands.

From Robotics, AI and the Impending Techno-Apocalypse by Terry Wood

Terry Wood is a political consultant, writer and editor from Brisbane, Australia. Naturally, the politics and societies of the future, both utopian and dystopian, interest him.
:

‘The first ultraintelligent machine is the last invention that man need ever make, provided that the machine is docile enough to tell us how to keep it under control.’ JJ Good (1965)

Chris is an Australian writer of science fiction and fantasy. His work has appeared in Aurealis and Andromeda Spaceways Magazine, and in anthologies published by Ticonderoga Publications, Dark Prints Press and CSFG Publishing.
:

Dirk, you’ve revealed in other forums that when you began Aurealis with Stephen Higgins back in 1990, you were readers and would-be writers of SF, but you weren’t fans, and didn’t really understand fandom. How were you able to produce a magazine that has clearly lasted the test of time?

His latest book is Leo da Vinci Vs the Ice-cream Domination League.
:

One of Australia’s greatest all round athletes, Archibald Cistoon’s prowess was discovered at an early age when he began to walk at only two months of age. At the age of five months he was able to pin his mother two falls out of three, and by his first birthday he showed that he could bowl a wicked in-swinger.