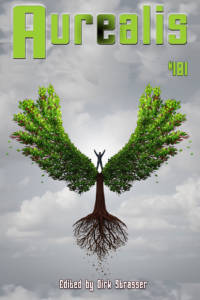 How much does the science fiction and fantasy we experienced as kids affect us as adults? As part of preparation for a panel, I’ve recently looked more closely at how my childhood SF influences have affected both my writing and my life. And the results were fascinating.

Nowadays the big science fiction divide is whether you’re into Star Trek or Star Wars. When I was a kid, the divide was whether you were into Star Trek or Lost in Space. For me, my brother and my friends, there was no contest. It was Lost in Space. Star Trek seemed too dark, too serious, too scary, too adult. And it tended to be on at a time slot I was rarely allowed to stay up for. Lost in Space on the other hand was spiced with just enough silliness and humour to dilute some of the disturbing bits. When we played planetary explorers in our backyard, it was always based on the Lost in Space template. We weren’t boldly going anywhere with a noble mission; instead we had always crash-landed on a planet or needed to look for fuel.

Looking back, I think I can credit Lost in Space for my first major science fiction publication. It was a short story called ‘Waiting for the Rain’ which appeared in the Robert Silverberg anthology Universe 2 (Bantam) in 1992 and was subsequently translated and reprinted a number of times. The central idea was of a human identifying so completely with a different sentient species that they sought chemical means to transform themselves into the alien form. I have little doubt that what gave this story its poignancy and depth was my decision to make the alien species plant-like. I was aware at the time that this came from a distant childhood memory I had of a Lost in Space episode called The Great Vegetable Rebellion where Dr Smith slowly turns into a tree. It’s ironic that a story which readers say is extremely sad has as its inspiration arguably the silliest episode (featuring a carrot man) of one of the silliest science fiction TV series ever made. But childhood memories are both wondrous and strange phenomena.

One of my absolute favourite books as a child was the Tintin graphic novel by Hergé, Prisoners of the Sun, where Tintin, Captain Haddock and Snowy travel through the mountains and rain forests of Peru searching for Professor Calculus, eventually discovering a hidden Inca civilisation. I loved that book and lost count how many times I read it. And each reading took me to Peru. Until, as an adult, I actually trekked the Inca trail through the Andes to Machu Picchu and explored the Peruvian Amazon. And now, obviously not coincidently, my recently completed fantasy novel is set in the Andes and involves a search for a hidden Inca kingdom!

Then there was a movie called The Monolith Monsters that terrified me for a long time as a child. In it, black rock crystals from a meteor started multiplying and growing to prodigious heights when they came in contact with water, crushing everyone and everything in their path. When people picked up the smaller pieces, the crystals drew the water out of their bodies and turned them to stone. I remember my parents sent me to bed before I saw how the movie ended, so I guess I had no closure. I assume a way of stopping the rocks was found, but I never knew what it was. For months I would lie awake at night praying there were no black crystals under my bed. Anyone who has read my Books of Ascension trilogy set in the mountain world of Zenith where giant pillars erupt from the ground can see which childhood trauma that idea came from.

And don’t get me started on the cover of this issue of Aurealis and its connection to the Magic Faraway Tree.

From A Cold Heart by Allan Chen

Allan Chen has had one previous publication in Aurealis, and is currently working on a novel which, given its current rate of progress, might reasonably be completed sometime after the end of the world.
:

Sam was not yet home from school, so the house was empty. Emily closed the front door behind her, strode into her study, and sat down at her computer. She glanced at the locked cabinet in the corner, but made herself dispel the thought of it.

Adam is a professional technical writer and software engineer based in Perth, Western Australia.
:

I’d like to say that I’d been in worse scrapes, but waking up in a bathtub full of ice with a memory modem shoved up my arse was a new low.

From Perfect Assassin by Raluca Balasa

Raluca's approach to writing is character-oriented, often dealing with love-hate relationships, antiheroes, and antagonists who make you agree with them.
:

Under the light of a rusty chandelier, a man and a woman sat opposite each other. Twin flagons of ale stood before them at the table, and shadows ghosted across their features every time wind from the opening door blew the candles.

From The Other Genres of Fergus Hume by Lucy Sussex

Some writers find a genre that suits them and stick to it. Others dip in and out of genre, like gadflies. Others, while working within genre, try out other modes of writing, either because they feel constrained by audience expectations, or like the odd experiment.

From Dissecting SF: Too Much Gun by Lachlan Walter

Lachlan Walter is a writer and nursery hand (the garden kind, not the baby kind), who has completed a PhD in Australian post-apocalyptic fiction and national identity.
:

From the heat rays of H G Wells’ War of the Worlds to the phasers of Star Trek; from the blasters of Star Wars to the Lawgiver of the Judge Dredd comics; from the smart guns and pulse rifles of Aliens to the Needler of Harry Harrison’s The Stainless Rat; the gun in one of its many forms has always been a part of science fiction.

Michael's latest book, Gap Year in Ghost Town, is due for publication in August.
:

Sarah McTeeley goes down in history as Australia’s only known female pirate.