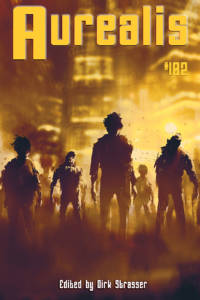 This issue of Aurealis features Marlee Jane Ward’s ‘The Great House Thrippet, Season 246, Episode 12’, a tightly written story set in a chilling reality show of the future, James Rowland’s ‘The Planck Harvest’, a beautiful story of subtle stillness, and ‘Pretty Little Ones’ by Leigh Harlen, a powerful and disturbing tale of alienation that somehow manages to be both sad and terrifying.

At a recent convention, I went to a panel on secondary worlds in weird fiction and how they differ from the secondary worlds in dark and epic fantasy. It made me think about the weird fiction I had read and I’ve been grappling with a question ever since.  I don’t think it’s possible to criticise a humorous novel for being be too funny. The funnier it is, the better.  Similarly, I don’t think it’s possible for an SF novel to have too much of a sense of wonder or even for a horror novel to be too scary.  However, is it possible for a weird novel to be too weird?

Weirdness tolerance levels vary enormously, and I would say although I like weird fiction, I have my limits. I’ve certainly stopped reading some novels or watching particular films because I thought they were too weird. It got me thinking about one of my all-time favourite books, China Miéville’s The Scar. Those of you who have read it will know how weird it is. It’s set in the bizarre world of Bas-Lag, featuring the pirate city of Armada, a huge flotilla of captured ships bound together which constantly expands by capturing vessels and people.

Bas-Lag contains humans, but it is also clustered with grotesquerie. The rulers of Armada are a couple called The Lovers whose intimacy consists of cutting symmetrical patterns into each other’s faces. The Scabmettlers are gray-skinned humanoids whose blood congeals immediately into armour when they are injured. The Remades are bio-engineered criminals who have been punished by the surgical grafting of new organic or mechanical appendages such as caterpillar treads, giant necks or skeins of spasming arms. There are giant plant people called Cactacae who have sap for blood and whose young grow out of the ground but are nursed like mammals, and half-human half-lobster ocean dwellers called Crays.

Probably the most memorably weird creation in The Scar was the Anophelii, a race whose females are mosquito-women who bloat as they suck all the fluids right out of a body, and who only attain rationality and peace from their hunger for a short time after feeding.  In a key scene in the novel, a mosquito-woman is killed while trying to speak to one of the men who had come to their island:

She was full. They’re… they’re intelligent. It’s not that they’re mindless. It’s the hunger, he told me. It takes a long, long time for them to starve. They can spend a year without feeding. Screaming ravenous for all those weeks. It’s all they can think about. But when they’re fed, when they’re full—really sated—there’s a day or two, maybe a week, when the hunger abates. And that’s the time they try to talk.

The weirdness in The Scar is often conceptually on a different plane. One of the characters, Uther Doul, wields a deadly weapon called the Possible Sword, a blade that instantaneously makes every possible cut he could have made. The ‘scar’ in the title, desperately sought by The Lovers as the source of unimaginable power, is a wound in the world where reality disintegrates and possibility breaks down.

So, if The Scar wasn’t too weird for me, where are my weird limits? I’m afraid I reached them with another China Miéville novel called Embassytown. In it the enigmatic alien Ariekei have two mouths and speak a language that requires two words to be spoken at the one time. (Too weird?) They can only speak of things that actually happened, so they need to stage similes in order to talk about new experiences. (Got it?) One of the characters, Avice, realises at one point that she is a simile.  (How are you going with that?) I simply couldn’t get my head around the alternative space-time reality in the novel, called the immer, so I can’t describe it now.

I hope I haven’t weirded you out.

‘I want to… leave?’ Piyel tells her mother, who is watching her cry from the other side of the kitchen bench. They have twenty-seven percent of their conversations there, and it rates at a 7.8 with the viewers because it seems so ‘homey.’

From The Planck Harvest by James Rowland

James Rowland is a young, New Zealand-based, British-born writer. whose work has appeared in several publications, such as Farstrider Magazine.
:

Like a pendulum losing momentum, my days grew shorter with each passing night. I would wake a little later and fall asleep slightly earlier and soon a sunset was a distant memory.

From Pretty Little Ones by Leigh Harlen

Leigh Harlen lives in Seattle where they can usually be found writing in dark corners with a glass of whiskey, being generally weird and making strangers uncomfortable.
:

Every seven is the devil’s due,

They’ll take you away and leave you changed,

No longer a pretty little one,

A weeping, screaming, ugly one.

So, throw on a log, heat up the fire,

From The Case of the Trashy, Tripey Novel with a Marxist Slant: M Barnard Eldershaw and Science Fiction by Gillian Polack

Gillian Polack is a writer, editor and historian. She has six published novels, and her second novel 'Ms Cellophane' (Momentum) was shortlisted for a Ditmar.
:

I’ve taken to asking people, ‘Would you read a science fiction novel written by political Australian female literary writers in the early 1940s?’

From When Too Much Pleasure is Never Enough: An Exploration of Hedonism by Claire Fitzpatrick

Three of Claire's Aurealis articles were nominated for the 2016 Aurealis Convenors Award For Excellence.
:

You are sitting in an empty attic in an abandoned house. You have just purchased the Lament Configuration puzzle box—a portal to an extra-dimensional reality which will only work after you’ve solved the puzzle.

Michael's latest book, Gap Year in Ghost Town, is due for publication in August.
:

Son of legendary cheesemaker, light industrialist and aviator Daisy Fingal, Philo Pargetter endured an uneventful childhood to become one of the nation’s top fifty hairdressers of the 1950s.