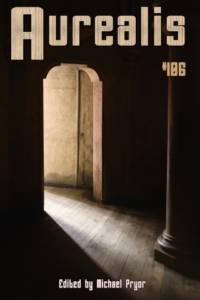 Aurealis #106 features ‘In Cinematic Terms’ by Brianna Bullen, ‘The Sylkies’ by Henry Gasko and ‘Howling Mad’ by Kris Ashton, as well as non-fiction from Gillian Polack and Chris Large’s interview with C S Pacat plus the latest in reviews.

Bold statement—writing historical fiction and writing fantasy (of certain sorts) are almost identical undertakings. Game of Thrones and Wolf Hall? The same thing, really.
Think about it. Writers of both have to introduce and explain an unfamiliar world. Writers of historical fiction and writers of fantasy can’t assume the shared knowledge that writers of contemporary fiction can.
Writers of contemporary fiction can take a great deal for granted. They don’t have to explain the social mores, the political structure, the clothing, the standard layout of buildings, methods of transport, forms of communication, common technologies, and thousands of other details of life that affect and intersect with their characters.
Not so with the writers of fantasy and historical fiction. They have to help the reader come to terms with a world that could be alien in countless ways.
The first step for both, of course, is that they have to be familiar with the world they’re introducing. Here’s where their jobs may diverge a little. The fantasy writer has to work from scratch, whereas the historical fiction writer doesn’t.
And let’s face it, most fantasy secondary worlds are derived from history. Fantasy writers are always scouting around the world and going back and forward through time looking for fertile areas as a springboard into world creation. Take a time period and location that’s in turmoil, tweak the events and the names a little, add some magic and there’s the beginnings of a framework for a solid fantasy trilogy or two, easily.
Therefore, both fantasy and historical fiction writers spend a great deal of time researching, in order to be utterly cognisant with the world they’re about to introduce. After this comes the delicate task of sifting in all the background detail. The challenge is to do this without boring the reader. After all, they’re writing fiction, not textbooks.
There is a higher challenge, though. The higher challenge is not just to do this without boring the reader, it’s doing it without the reader even noticing, and therein lies the art.
The key term in trying to define what writers in both genres are trying to do is that they’re trying to make our worlds convincing. Even though the world may be unfamiliar to the reader, they have to convince her/him that the setting is a believable one, one with a coherence and an underpinning that resonates with the human experience. The setting could be archaic, primitive, old-fashioned or exotic in unearthly terms, but writers need to give the reader entry into this world by making it a plausible one.
Done well, this accounts for some of the allure of both genres. They both take readers somewhere different, somewhere outside the ordinary, somewhere fresh and exotic where characters can play out their dramas in ways that extend the range of human actions, interactions and possibilities.
All in all, sometimes we think the only difference between writing historical fiction and writing fantasy is that one has magic and one doesn’t. We’ll leave you to decide which is which.

She feels she has been here so many times before. It’s become imprinted in her synthetic DNA. It is a Sunday, but she does not have work tomorrow or the day after. She can afford to take her time, so she thinks in cinematic terms. Montage. The birds fly east—these are possibly Canadian geese, or mechatronic albatrosses. It depends on the universe’s budget and sense of scale. To her, they look like Canadian geese, but they are hazy and indistinct in the burst orange light. The water crashes against the rocks, shattering the shell of a crab that dared to stay out too long. The corpse of a seal sits suspended in animated-wave life.

Henry Gasko was born in a displaced persons’ camp in Yugoslavia, raised on a vegetable farm in Canada, and has lived for the past forty years in Australia. He retired recently and is renewing his life-long interest in SF and horror, deferred for many years while career and family took precedence. He has published a previous story in the Australian anthology “Dreamworks”.
:

Peter flexed his left leg as he climbed out of the car. It had stiffened during the four hour trip from Melbourne, and then the banding, the tightness around his legs and waist, had begun again.

He sometimes imagined a torturer attending to him, face hidden inside a dark hood, applying the talents of a lifetime spent learning his craft. But instead of tying his hands and feet to a rack, this Inquisitor used a simple belt, with finely spaced studs that were punched along its entire length. The torturer had first applied the belt to his left thigh almost two years ago. A very light pressure then, and Peter had ignored it for months: a minor irritation, nothing more. Days had often gone by when he had felt nothing at all.

From Howling Mad by Kris Ashton

Kris Ashton lives in the wilds of south-western Sydney with his wife, two children, and a slightly mad boxer dog. 'Howling Mad' marks his first appearance in Aurealis. His stories have graced the pages of Andromeda Spaceways, Midnight Echo, Perihelion SF and many other speculative fiction publications. He has also just finished his second mainstream novel, much to everyone's surprise.
:

The miles had left him footsore, and hunger was Billy’s constant companion, but the worst carnage was now eight days behind him and the barrel of the rifle slung over his shoulder had been cold for two.

They had stayed put on his father’s insistence while Bathurst was overrun (‘We have a home ground advantage. We’re safer here.’), but when marauders besieged their house—and gave Billy his first inkling the living might be more dangerous than the dead—he had plucked up his rifle and begun a one-man exodus, first from his home, and then from his hometown.

From One Name, Two Writers by Gillian Polack

Gillian Polack is a writer, editor and historian. She has six published novels, and her second novel Ms Cellophane (Momentum) was shortlisted for a Ditmar. She has edited two anthologies and has seventeen short stories published URL: www.gillianpolack.com Facebook: Gillian Polack Twitter: gillianpolack
:

I’ll be honest, my intent for this article was to write about Andrew Lang’s interest in Australian folklore. John Lang got in the way. In fact, two John Langs got in the way.

From Blazing New Trails: An Interview with C S Pacat by Chris Large