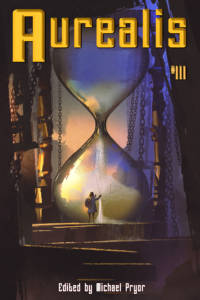 Aurealis #111 brings you ‘Graft Mage’ by William Broom, ‘The Egg and the Cat’ by Miles Hurt and ‘Deserted Lies the City’ by S R Dean plus outstanding non-fiction from Eugen Bacon and Mikey Pryvt.

Tolkien’s reputation as perhaps the pre-eminent Fantasy author rests on many things—the epic sweep of his vision, the extraordinary depth of his linguistic invention, the establishing of so many conventions that we take for granted in the genre today. Sometimes, however, we overlook the ingenuity of many of the narrative devices that Tolkien used and perhaps introduced to Fantasy.

As one of the inventors of the classic Secondary World form of Fantasy, which does away with the necessity for characters to traverse from our world into the world of magic and adventure, Tolkien used a host of techniques to create a convincing and immersive Otherworld. Some of these are overt, but some are so subtle that they need some pointing out. And, of course, once pointed out they can be appreciated and imitated, for learning from the masters is always good practice.

In the dark and danger of Moria, Aragorn tries to reassure the party by praising Gandalf’s sense of direction, saying ‘He is surer of finding the way home in a blind night than the cats of Queen Beruthiél.’ No one in the Fellowship turns around and says, ‘Who the what?’ or expresses any puzzlement over Aragorn’s offhand allusion, and this is part of the device which we can call Expanding the Scope.

As soon as Aragorn drops in his reference it’s as if the story has suddenly expanded, becoming one small part of an immense narrative with its own history and antecedents. It actually doesn’t matter who Queen Beruthiél is or who her cats are. The point is that she and her moggies are well enough known to have become proverbial, which is something that takes time. The mention of her and her domestic menagerie immediately telescopes the story backwards, hinting at a huge back story that has occurred before the events in the mines of Moria. Straight away it gives richness and texture to the events, and it hints at layers of history that make the current narrative all the more convincing because it has a context and precursor events, just like reality has. The scope of the story has just expanded, and not just in a trivial way. It has rolled backwards for perhaps centuries, all with one tiny mention of a monarch and her pets.

From Graft Mage by William Broom

William Broom lives in the northern suburbs of Melbourne, where he runs an ironing delivery service. His short stories have previously appeared in Beneath Ceaseless Skies, New Myths and Canary Press Short Story Magazine. He collects obscure cassette tapes, animal figurines and other beautiful things.
:

Hain had been sleeping under his cloak, dreaming of making love to his captain. Now he was woken by the sounds of distant battle starting up again. He had half-expected he would not wake at all—that the enemy would find him while he slept, and death would come this way. But he was still here. He rose quickly and crept down into the grey dawn.

From The Egg and the Cat by Miles Hurt

Miles Hurt is from Castlemaine in Victoria. As well as being a writer, he is a teacher and musician. His short stories have appeared in Antipodean SF, Three Lobed Burning Eye, and Aurealis. In 2017 Miles published his debut novel, 1001 Monsters You Must Slay Before You Die, which is currently available from Amazon. He also blogs about speculative fiction at www.mileshurt.com.

Bingham’s pill was wearing off. He was starting to feel things again, starting to think. He needed another one.

There was a knock at the front door.

His eyelids flickered in the shaft of sunlight, his head wobbling backwards. The knock came again.

‘Could you get that?’ called Pip.

Bingham breathed deeply. Pip was in the backyard, sitting in the bright garden; it would take her a minute or so to manoeuvre to the front door. He had to get up.

From Deserted Lies the City by S R Dean

Sunyi Dean is a reader and writer of speculative fiction, and is particularly drawn to stories which blur genre lines. Currently she resides in England, but has previously lived in Hong Kong and the USA. Her first full-length book, The Origin of Sight, is on submission, and two other novels are in the works.

Whenever Elon asked have we run out of food, Isa would say yes, and they’d play a game of ‘imagination sandwiches’ where their hands were bread and they imagined what went between the slices. When he asked how far do we have to walk, she would tell him in miles, yards, and finally feet, so he could count their steps across the wastelands.

She never hid the truth from him. Lies were treacherous things, no matter the intent.

From What is AfroSF? by Eugen Bacon

Eugen Bacon is a computer graduate mentally re-engineered into creative writing. She has published over 100 short stories, articles and multiple anthologies.

It was a journey of discovery that led me to a community.

From Fighting for the Future in a new Dark Age: An Interview with Corey J White by Mikey Pryvt

Mikey Pryvt's work ranges from travel writing to book and film reviews to wildly speculative essays on the science-fictional condition. You can find him exploring the Earth's fate after climate change at https://theposthuman.world, or on Twitter as @m1k3y.
:

Corey J White sits at a table in his backyard, explaining why he dedicated Void Black Shadow—the sequel to his debut novella, Killing Gravity; known collectively as the VoidWitch Saga—to Chelsea: ‘It’s because a big chunk in the middle of the book is based on the torture techniques used at Guantanamo Bay and that is part of the documentation that Chelsea Manning leaked.’