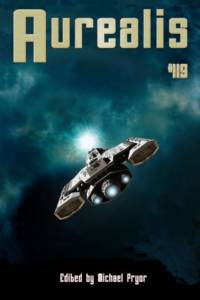 In Aurealis #119 we have gripping stories by Michelle Birkette, Gordon Grice, and Chris Walker, plus absorbing non-fiction from Kris Ashton, Kristina Grifantini and Amy Lauren. Plus an extravaganza of a reviews section and stunning internal art!

Let’s go to one of the basic building blocks of Story, the sentence. Masters of the genre have a way of cranking out a cracking sentence. Here are some of our favourites.

‘On the heights above the river Xzan, at the site of certain ancient ruins, Iucounu the Laughing Magician had built a manse to his private taste: an eccentric structure of steep gables, balconies, sky-walks, cupolas, together with three spiral green glass towers through which the red sunlight shone in twisted glints and peculiar colours.’ Jack Vance, The Eyes of the Overworld

This is the opening of the book and it’s Jack Vance in full baroque mode. Sly, spiky, complex and mannered in an utterly distinctive way. Nice use of the colon, too, for which he gets extra marks.

‘Bright bloomed the morning, and debts were settled beneath it.’ Roger Zelazny, Lord of Light

Almost the opposite of the Vance example, Zelazny goes the economical route in this chapter opener. See the way he plays with word order (‘Bright bloomed the morning’ instead of the more customary ‘The morning bloomed bright’) and then he crushes the clichéd description of daybreak with a hammer blow. The way the sentence finishes is so far from where it started that it takes your breath away.

‘A profound love between two people involves, after all, the power and chance of doing profound hurt.’ Ursula K Le Guin, The Left Hand of Darkness

Never use a strong, unusual word like ‘profound’ twice close together! And certainly never in the same sentence! Except if you’re in serene control like Ursula Le Guin was with this one. It’s almost musing (‘after all’) and is profound in its own right.

‘Atop that, yet more crisp-cut stone towering higher and higher as if men competed with the gods who had thrown up the great rock the whole edifice stood upon.’ Lois McMaster Bujold, The Curse of Chalion

Lovely scene setting. Bujold takes her time with this sentence, a lesson for all writers. She doesn’t hurry, and brings it home with a simile that’s not only a winner, but by its mention of gods it hints at mysteries, vistas and back story that efficiently adds texture to the narrative.

‘Driving east on the Santa Monica Freeway in the pre-dawn darkness, the moon long since set and the skyscrapers of downtown Los Angeles standing up off to his left like the smouldering posts of some god’s burned-down house, Crane had been seized with the idea of just staying eastbound on the Pomona Freeway, and all the way out past Ontario and Mira Loma to where it joined with the 15 in one of those weird, semi-desert suburbs with names like Norco and Loma Linda, and then straight on up to Las Vegas.’ Tim Powers, the Last Call

How can you make a description of a humdrum world resonate with otherness? This is how. Pop in a disconcerting simile (‘like the smouldering posts of some god’s burned-down house’), use strong verbs (‘had been seized’) and then the world becomes ominous, uncanny, threatening.

‘Readers will always insist on adventures, and though you can have grief without adventures, you cannot have adventures without grief.’ Catherynne M Valente, The Girl Who Circumnavigated Fairyland in a Ship of Her Own Making

This is a sentence built around rhythm, using repetition for an effect bordering on the sonorous. Three is the magic number, and using a word three times is like casting a spell.

Sometimes you just nail a metaphor. We can imagine that after writing that one, WG sat back with a small smile on his face.

‘Joe felt the familiar exultation, the epinephrine flame that burned away doubt and confusion and left only a pure, clear, colourless vapor of rage.’ Michael Chabon, The Amazing Adventures of Kavalier and Clay

Rhythm again. Hear the drumbeats of ‘pure, clear, colourless vapor of rage’? Hammer blows, building, echoing Joe’s boiling fury. Add to that the startling image of rage as ‘the epinephrine flame’ and we have a sentence to savour again and again.

‘True peace required the presence of justice, not just the absence of conflict.’ N K Jemisin, The Killing Moon

A neat antithesis, a sentence balanced around the comma which gives it a neat impetus. We read the first part and we know that something is coming either to turn this around or to emphasise it. Clean, cadenced, punchy.

From In the Mountain Valley by Gordon Grice

Gordon Grice’s story “Hide received an Honorable Mention in Ellen Datlow’s The Year’s Best Fantasy and Horror. His nonfiction books include The Red Hourglass: Lives of the Predators and The Book of Deadly Animals. His articles have appeared in The New Yorker, Harper’s and GQ.
:

Morland’s trouble was keeping decent hired hands. The latest to quit was Sweeney.

‘It had big eyelashes like a lady,’ Sweeney said. That was a new one, though Morland had heard the basics of the tale before: a little man, naked and starving, with big round eyes, darting around between the rocks and stealing a canteen here or a bag of jerky there, looking like he meant to do more. It hardly sounded like something to be scared of.

From Abomination by Michelle Birkette

Michelle Birkette has had short stories accepted by Daily Science Fiction and, now, Aurealis. Feel free to check out her twitter profile and say hello at @m_birkette.
:

But… Words can’t hurt me. Her mother had always taught her that, but it felt like such a long time since she’d heard those words of wisdom. She’d always been quiet, always been teased by the other boys and girls at the village. Her mother taught her to brush away the words and just keep going, because words don’t hurt unless you let them.

From Fracture Line by Chris Walker

Chris is a professional byte-wrangler and sometime astrodynamicist. He enjoys writing stories of other worlds and days that might be. He lives in the UK and loves the liquid phase of what you humans call coffee. Chris’s stories have appeared in Aurealis, Andromeda Spaceways Inflight Magazine, Electric Spec and Mad Scientist Journal.
His website is at: http://www.chriswalkerbooks.com/

An observation torpedo flashed past Lieutenant Grayson’s ship as it looped in a tight spiral. The OT’s sensors registered a mass proximity; less than a nanosecond later the weapon detonated. Its vis-blast tore through his locality with a blistering savagery. The fragile wavefunctions that spun like filigree whorls around him instantly collapsed, reducing the set of possible realities to an alarmingly small size.

From Suffer the Little Children: An Analysis of Parental Horror in Stephen King’s Early Fiction by Kris Ashton

Kris Ashton is an Australian writer best known for his tales of dark speculative fiction. His story ‘Howling Mad’ appeared in Aurealis #106 and his sci-fi/horror novel Invasion At Bald Eagle is now available from Digital Fiction Publishing. He lives in the wilds of south-western Sydney with his wife, two children, and a crippling mortgage. Read his blog at kris-ashton.wixsite.com/spec-fic
:

During an interview in the 1980s, horror writer Stephen King was asked to name the most horrible thing he could imagine. ‘The worst thing I can think of,’ King said, ‘is going in to check on my kids and finding one of them dead.’

From Legendary Women in Horror by KC Grifant

Over 200 years ago, Frankenstein’s monster lumbered across the minds of readers around the globe. The tale of Victor Frankenstein and his monster’s anguish tapped into fears about science, nature, and both the power and helplessness of humanity.

From Worldbuilding: The Bad and the Just Plain Ugly by Amy Laurens

Amy Laurens learned about science fiction and fantasy through her best friend in Year 8, who introduced her to Terry Pratchett's work. Amy has never looked back. You can find her books, including How To Create Cultures, the first in her how-to-worldbuild series, at www.amylaurens.com.
:

What do Star Wars, Star Trek and Firefly have in common?

Well, aside from being popular entries in the science fiction genre, this: they are all the subject of complaints when it comes to worldbuilding. And taken together, they illustrate neatly three of the core problems that arise when creators start their worldbuilding in the wrong place, or forget what the ultimate purpose of worldbuilding is.