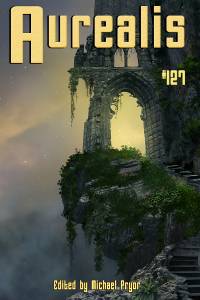 Issue #127 kicks off this auspicious twelve months in style, with the quietly evocative ‘Sly Ghosts’ from Geraldine Briony Hunt, the off-beat and engaging ‘Hatecars’ from William Broom and the absorbing ‘Healer’s Trial’ from Emily Randall. Our informed and entertaining non-fiction this issue comes from Claire Fitzpatrick, Kris Ashton and Eugen Bacon, and our reviews section is overflowing with insightful recommendations.

PLUS a special 2020 bonus, our first ever serialised novel! Conquist, from Aurealis co-publisher Dirk Strasser, is a gripping, masterly exploration of otherworldliness and obsession, and will keep you rivetted all year!

Aurealis, head and shoulders above the rest.

In Australia in 1990, Bob Hawke was elected as Australia’s Prime Minister for the fourth time, the Toyota Land Cruiser was launched, the State Bank of Victoria was sold to the Commonwealth Bank of Australia, the domestic aviation market was deregulated, Fairfax Media was placed in receivership, John McEnroe was thrown out of the Australian Open Tennis Championships, Collingwood defeated Essendon to win the 94th VFL/AFL premiership, and Liam Hemsworth was born.

Also in Australia in 1990, Aurealis (the Australian Magazine of Fantasy and Science Fiction) was launched. Now, thirty years later, you have issue #127 in front of you. What has gone before is one hundred and twenty-six issues of quality Fantasy/SF fiction and non-fiction, thanks to the tireless work of many, many people.

Are we celebrating? Quietly, with a sense of real achievement, and we’re the ones who are going to be giving presents, starting with our first ever serialised novel. Conquist, from Aurealis co-publisher Dirk Strasser, is a gripping, masterly exploration of otherworldliness and obsession, and will keep you rivetted all year.

Here’s to the next thirty years!

Geraldine Hunt is a retired veterinary surgeon with an insatiable interest in the ocean. Currently living on a cruising catamaran, she has also embarked on her other love; creative writing. Geraldine has always appreciated the weird and quirky nature of life, and the sometimes fluid, boundary between fantasy and reality
Her website is www.offwriting.com.
:

The island only moved at night, and not every night—just those when the high tide lapped over the southern edge of the seawall. Moonless nights, where all you could see were stars, and the black sea, and the dark, looming hulk on the horizon.

Not that anyone believed her—scary Mary, rattles from all those pills she’s taking. But she wasn’t taking her pills anymore, at least not nearly as often, and on those moonless nights when nobody else was paying attention, the island was coming closer.

From Hatecars by William Broom

William Broom is a writer from Melbourne. His fiction has been published previously in Aurealis, Beneath Ceaseless Skies, New Myths and others. Melbourne residents can find his zines ‘Eastern Bog Review’ and ‘Trow-Land’ for sale at Sticky Institute, and people of all nations can follow him on Twitter @willjbroom. He also writes about tabletop roleplaying games at rogues-repast.blogspot.com.
:

Don’t reckon I ever heard of somebody being taken away by a hatecar before. Smashed to bits on the road, sure. Crushed through the walls of their house while they were eating their dinner. Chased up a tree and circled for days until they died of thirst. All that happened. But not picked up and put inside.

There’s a first time for everything, though.

From Healer’s Trial by Emily Randall

Emily is a software developer who specialises in user-centered design and accessibility. They currently work for Google on one of the many Search teams, which is both exciting and rather nervewracking, but they can’t imagine doing anything else. Their stories have been published by Zombies Need Brains, Future SF, and the Society of Misfit Stories. They can be found at www.emily-randall.com.
:

Little Rialor, ‘home to a thousand wonders’, was not living up to its reputation. Smog, factories, and humans abounded, but wonders? In five hours of wandering, Ystara had yet to see any.

She tucked her wings farther under her pack, ignoring the ache in her flight muscles, and glanced around the darkening street. The temple had to be around here somewhere, didn’t it? Even if the hasty directions she’d received from the guard were missing a few details, she couldn’t be too far away.

From CONQUIST Part 1: At Sun’s Gate by Dirk Strasser

This novel is based on the first English translation of a diary that came to light in an archive in the Museo Nacional de Arqueología, Antropología e Historia del Perú in Lima. The extracts are included with the kind permission of the translator. Cristóbal de Varga was a distant cousin of both Hernán Cortés and Francisco Pizarro who, unlike Pizarro and many of the other conquistadors of his time, was highly literate. This very facility with words has lent credence to those that claim his journal comprised merely the fevered imaginings of a man frustrated by his own lack of success in an age where others were making their fortunes. A recent spectral analysis of the cover of the diary, however, has shown that what was thought to be solidified droplets of gold may, in fact, be a previously unknown chemical element.

From Marginalisation and the Future of Horror by Claire Fitzpatrick

Claire Fitzpatrick is an award-winning author of speculative fiction and non-fiction. She won the 2017 Rocky Wood Award for Non-Fiction and Criticism. Called ‘Australia’s Queen of Body Horror’ and ‘Australia’s Body Horror Specialist,’ she enjoys writing about anatomy and the darker side of humanity. Her debut collection Metamorphosis, hailed as ‘simply heroic,’ is out now from IFWG Publishing.
:

After experimental success in the 1970s, a commercial push in the 1980s, an underground existence in the 1990s, and a contemporary revival in the 2000s, the contemporary horror film industry has demonstrated a consistent rise and growth over the past several decades.

From Classifying Catastrophe by Kris Ashton

Kris Ashton is an Australian author and journalist. His fiction, essays and reviews have appeared in Aurealis, Andromeda Spaceways, Antipodean SF, Midnight Echo and numerous international publications. His scifi horror novel Invasion at Bald Eagle is available now through Digital Fiction Publishing. He lives in the wilds of south-western Sydney with his wife, two children and a crippling mortgage.
:

Since the advent of streaming services, I almost never watch free-to-air television, unless it’s to fall asleep to the white noise of some banal renovation show. But a while ago I turned on the TV and happened to catch a few minutes of an apocalypse movie called The 5th Wave (2016). It is to end-is-nigh films what Twilight was to vampire films, and every bit as dismal as that description suggests, but even watching it with almost no volume I began to see some clear tropes—and it occurred to me that disaster and apocalypse movies have been continuous blockbuster staples for 25 years.

From Chilling Out with Lian Hearn by Eugen Bacon

Eugen Bacon is a computer scientist mentally re-engineered into creative writing. Her work has won, been shortlisted, longlisted or commended in national and international awards, including the Bridport Prize, Copyright Agency Prize, L. Ron Hubbard Writers of the Future Contest. Publications in 2020: A Pining, Meerkat Press. Black Moon, IFWG. Inside the Dreaming, Newcon Press.
:

This interview is a special farewell to one of Australia’s most internationally successful writers, Lian Hearn, who’s never had to pitch anything about herself or her books. Her work is so striking, she simply wrote a novel and sent it to a publisher. Her beginnings were under the name Gillian Rubinstein, with the bestselling and award-winning children’s book Space Demons.