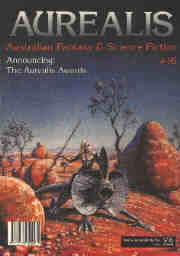 There are — with apologies to Mark Twain — controversies, damn controversies, and literary awards. The Demidenko-Darville Affair has proved that beyond a shadow of doubt. What a fascinating, dare I say stranger than fiction, story the whole affair was. The Hand that Signed the Paper was one thing when the author was Helen Demidenko, daughter of two refugees, whose Ukrainian father's family had been killed by Jewish Bolsheviks, and it became something completely different when the author was revealed to actually be Helen Darville, the daughter of British immigrants, who had no Ukrainian background whatsoever.

It's the sort of transformation I thought only happened in fantasy books. Did the work change once it was revealed that hers was not a genuine multicultural voice speaking to us? Was the story different when we knew it couldn't possibly be rooted in the attitudes and anecdotes of her father? Does the coldness with which some of the World War II atrocities are described suddenly become indefensible? The current dominant literary theory says that the work did change once we realised the author was not who she claimed to be. Should Helen Darville be stripped of her Miles Franklin Award? And the Vogel? Are awards given to people or words, I wonder? Perhaps authors should submit a statutory declaration with every submission to an award giving details of their real lives and a cross-reference to the events in their novel. That way, judges can make their decisions based on facts. Or better still, let's not bother with the novel — the statutory declaration is all the judges really need.

Of course, I haven't even mentioned the potentially more far-reaching controversy with The Hand that Signed the Paper, and that is the blatant anti-semitism of many of the characters in the novel. There's another minefield of issues here. Do we crucify authors for the views of their characters in a work of fiction? Does writing about a serial killer in a horror novel, for example, make you immoral? I don't think too many people would argue that it would; however, the issue isn't quite that simple.

Let's look at the more complex question. Is the author an immoral person if in writing about a serial killer, he or she presents, within the context of the novel, a plausible justification for what the killer does? Is it important to know what the author's real-life views of the issue are? How does a work of fiction differ from an editorial? Does the work of fiction exist in a vacuum outside real life? Or does an author always and inevitably reveal what is in their heart of hearts in their fiction? How would we know?

Suppose, for a moment, the author doesn't believe the evil that his or her main character is perpetrating, but is so skilled and convincing that some readers are persuaded by the argument presented by the fictional character. Suppose, further, that one of those readers then goes out and commits atrocities using the same convincing arguments given by the fictional character. Is the author at fault? Could or should such a novel win a literary award?

Let's take Robert Heinlein's Starship Troopers as an example. I personally find the underlying militaristic philosophy behind the book abhorrent. Even to suggest that a state should only grant citizenships to soldiers is barbaric. (Surely a far more inspiring system would be grant citizenship only to its artists.) Within the context of the novel, however, the arguments for it are utterly plausible. What if the very plausibility of the arguments inspire some crackpot dictator of the future to attempt to create such a society? Would Robert Heinlein be to blame if this happened? Would his skill as a writer in being able to present such a plausible scenario be precisely the root of his immorality? And what about Stranger in a Strange Land's influence on Charles Manson?

If you think that all these questions have easy or obvious answers, I'd suggest you probably haven't thought about them too deeply. I'm personally still grappling with the issues. If you have firmly held convictions, write in to our next Letters page.

In the meantime, the publishers and editors at Chimaera have entered the awards fray, perhaps at our peril, with our own awards.

With this issue we are pleased and proud to announce of the winners of the first Aurealis Awards for Excellence in Australian Speculative Fiction. The Awards have been established by the publishers of Aurealis to recognise the achievements of Australian science fiction, fantasy and horror writers. To be eligible for 1995 Awards, works must have been written by an Australian and first published in 1995. The only exception is in the case of a work being released too late in the year to be considered. If this happens, the work can be considered in the following year.

There are four divisions: Science Fiction, Fantasy, Horror, and Young Adult. (The Young Adult category covers all three genres.) For each division there is a Best Novel Award and Best Short Story Award, giving a total of eight Aurealis Awards.

The two awards and short lists in each division were chosen by an independent panel of three judges chosen by the editors of Aurealis. The judges were carefully selected according to their demonstrated knowledge of and commitment to Australian speculative fiction.

We have gone to great lengths to ensure that the Aurealis Awards are credible and fair — and are seen to be credible and fair. The four judging panels work independently of Chimaera Publications and of each other. Apart from broad eligibility criteria, each panel decides which works are eligible for their category. Any single panel can only have at most one editor or employee of Chimaera Publications. In this year's Awards, where ten judges were involved in the judging, no Chimaera editor was on any of the panels. It is the intention of the Aurealis Awards to complement the Ditmars and the Australian Children's Book Council Awards. Neither of these other Awards distinguish between the different categories of speculative fiction. We hope the Aurealis Awards short lists and winners will increase the profile of Australian science fiction, fantasy, and horror, and will provide an essential reading list for anyone with interests in these genres.

In the true tradition of literary awards, ours haven't escaped controversy entirely. Our policy is, and will continue to be, to stand behind the judges' decisions. It has been argued, for example that the Greg Egan novel Distress will not be published in Australia until 1996 and is therefore ineligible. Our response to this, however, is that it was released in the UK in December 1995 — hence it is eligible. Some people have also argued that Terry Dowling's An Intimate Knowledge of the Night isn't a novel. Our only response to that is that the three judges obviously thought that it was, and we stand behind their decision.

The judges' reports are on page 8. The winners and shortlisted works are given below.

…"Okay, Fracas," he said. "In the case of death there are seven regulations. So, where are we going?"

The AI remained silent for a moment while it searched through the Protocol. In Regulation Seven it found a group of co-ordinates and instructions to realign the ship's course accordingly. Obeying the Protocol it had done this — there was no further response available.

Fracas replied. "We are going to the place you go to when somebody dies."

The response was a strange one. Christos wouldn't have believed that a deep brain AI was capable of sounding so personal.

"Have you been on a ship where somebody dies before?" Christos asked.

"So you don't know where we are going?" Christos said.

…Fu-lai clutched at the puzzle in her hands. She had no idea how it would work — she just knew it was right. Her great grandfather's ghost had seemed so content, so wise. She hoped her afterlife would have those qualities. But what if she failed the test of the gods? Would she be left alone for all eternity for her failure, for her conceit, her audacity to think she deserved the chance at solving a puzzle?…

…"How well does magic work offworld?"

"How well do you walk on a planet that's got gravity half again as heavy as your homeworld?"

"Like I am ploughing through mud," Jennifer conceded, then quietly, "But I would not be ploughing."

Evan glanced up from her cards and nearly sent the pattern flying into colourful chaos. She could see right through Jennifer as the girl rose to her feet. The blurring of her body became clearer and clearer until she was almost invisible. Her feet were not touching the deck. She turned, becoming thinner in the way of a whirlwind twisting itself about, then turned back the other way and let her body expand and solidify.

"Ah," she managed, then deciding it might be as well to show slightly more intelligence, added, "You could have just told me you were Ashanta…"

My specialty was dragons. In all my life I have killed close to a thousand dragons. They are formed, you see, from the depths of the earth. Somehow Nature, the bitch-queen, holds her hatred for long enough to form from her essence drakes of living flame, of ebony and charcoal, or ice and sky. Dragons are not noble. They do not have souls like mortal people. But neither do I…

I was taking the poison to the cemetery when Dezlar stopped me.

"Can I talk to you for a minute, Kaylar?" he asked.

Dezlar lowered his gaze when I turned to look at him. Even the bailiff was afraid of me.

"There's been a murder…"