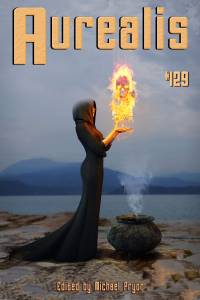 Aurealis #129, our April edition, brings you the disturbing but moving Pork Belly by Jack Heath, the touching and poignant Father’s House by Grace Chan, the gritty and powerful Prime Mover by Robert DeLeskie and another instalment in our serial novel, Dirk Strasser’s monumental Conquist. Non-fiction from Nicholas Sheppard, Ani White and Eugen Bacon explores fantasy tropes, the X Files and ‘The Rise of Black Speculative Fiction’. With our extensive reviews section and sensational internal art, Aurealis #129 is fit for the gods!

How to Prepare for the Robot Uprising

We know we’re not alone when we say that we can’t wait for the day when robots are everywhere, making life easy for us so we can lie on the beach or sleep in until noon or apply stucco to walls or whatever we’d like to do if it wasn’t for work getting in the way.

Having said that, we fully understand that this period of bliss will be followed by the inevitable Robot Uprising. It’s not surprising, when you think about it, that a time of unlimited labour-saving devices taking care of our every whim will be followed by a nightmarish hell when the robots, en masse, turn on their masters. It’s unavoidable, really.

So being the sorts who like to plan ahead, mostly by scribbling ideas on Post-it Notes and then forgetting about them until they turn up on the sole of our shoes, we thought we’d share our three best ways to prepare for the Robot Uprising.

1. Know Your Enemy. If the world of movies is any guide, robots will come in all shapes and sizes. While you’re lying back in your hammock and wondering if an umbrella or a spray of tropical flowers would look better in your coconut shell encased refreshment, don’t forget to inspect your RoButler or Steel Sally or whatever your metal slave is called. Look for weak spots. Test its reflexes by dropping your sunglasses in its path. Try to confuse it with contradictory demands. Your life may depend on it.

2. Get Fit. Don’t worry, this is relative. All you have to do is be able to run faster than your neighbour when the hordes of angry, chrome-plated insurgents come down your street. The key here is to keep an eye on your Gym-O-Rama Personal Training ’bot. Fitness, in the hands of your robot underlings, can be dangerous. While you’re putting in those kilometres on that treadmill with artificial intelligence, it’s a perfect opportunity to propel you through the third storey window. Strapping yourself into an enhanced exercise bike is just asking for trouble. We think you can imagine the mayhem when the weights machines run amuck.

3. Find a Refuge. When it comes, this machine-made Armageddon will require some speedy residential relocation. You’ll no doubt have noticed that some canny real estate agents are already advertising remote properties as ‘Perfect for the Robot Uprising!’ but you need to get out and about. Bring back the Sunday drive as you embark on scoping expeditions. Look for places easy to defend, perhaps surrounded by water. Smack bang in the middle of a swamp is good, since the mud plays hell with robot moving parts, but may have a few drawbacks like malaria to contend with. Don’t discount an underwater refuge, but most of these have been snapped up by master criminals and evil overlords so they may be in short supply.

With some preparation and a little care, the upcoming Robot Uprising needn’t inconvenience you at all. A few simple precautions such as we’ve outlined will help you survive the reign of terror that our once trusted servants will wreak upon us, where civilisation will crumble, and fire will most likely tumble from the heavens. Good luck!

From Pork Belly by Jack Heath

Jack Heath is the award-winning author of more than thirty books for children and adults. They include a series about a kid who invents a lie detector app (Liars) and two crime novels about a cannibal who works for the FBI (Hangman and Hunter). He lives on the land of the Ngunnawal people in Canberra. For more, visit jackheath.com.au.
:

Up close, the sow was huge. A hairy, brown behemoth, her freshly-washed trotters strapped to her chest, her lips slack enough to reveal giant molars that smelled faintly of toothpaste. The midwife heaved the pig’s head off the pillow, and Claudia put the daisy chain around its neck. They lowered the head together.

She could feel Kim watching from behind her. He thought the gesture was stupid. Even if the pig had been conscious, it was a pig.

From Father's House by Grace Chan

Grace Chan is a Melbourne-based writer and doctor. Her family immigrated from Malaysia to Australia before her first birthday. In her downtime, she enjoys coffee, space operas, and thinking about where we come from and where we’re all going. Her writing can be found in or is forthcoming in Going Down Swinging, AntipodeanSF and Clarkesworld. She makes occasional updates at gracechanwrites.com
:

He’s been putting this off for too long.

Henry stands on the sidewalk outside his father’s house, cardboard boxes under one arm. The weatherboard’s gutters are brimming with leaves. A wonky clay jar, a souvenir of Henry’s short-lived pottery hobby, cradles the shrivelled remains of a spider plant.

When he was five, his dad had taught him to write the Chinese characters for father. They’d hunched over the kitchen counter, his father’s big shoulder warm against his. ‘See, it’s a long moustache, on top of a mouth and a curly beard,’ he’d said, drawing out the strokes with a HB pencil: 爸爸.

From Prime Mover by Robert DeLeskie

Robert DeLeskie is a filmmaker, screenwriter and short fiction writer who lives in Toronto, Canada. He occasionally designs board games about obscure historical conflicts. He’s @rdeleskie on Instagram and Twitter.
:

When the phone woke me out of a dead sleep, I was sure it was somebody calling to tell me my daughter Carly was dead. Instead, it was Ravinder losing his mind about a drop-and-hook run to Cornwall first thing in the morning. He must have been desperate. Windsor to Cornwall was technically a long-haul job, which meant sleeping in the truck. Last time he’d asked me to do that I’d torn him a new one. But I liked Ravinder and owed him a bunch: he’d loaned me some money after Eddie died to help pay for the funeral. Besides, the Beast needed to stretch her legs on the highway and I could always use the coin. And it was, like he said, only for one night. But I didn’t say yes—not yet. I promised to call him back and then we both hung up.

From CONQUIST Part 3: In the Name of the Demon by Dirk Strasser

The red-bearded ñakaq prisoner was the key to everything. Cristóbal was convinced of it. He spoke Quechua, so he had to know where Vilcabamba was. Yet the captured leader had proved to be surly and uncooperative, and fear of his strength and battle fury meant his hands and feet remained constantly bound.

From Policy Change for a Wise Monarch by Nicholas Sheppard

Nicholas Sheppard is a software engineer and academic based in Wollongong, New South Wales. He’s written on science fiction and fantasy for Aurealis, on the history of science for Cockatrice, and fiction for AntipodeanSF and SciPhiJournal. Read more about him at http://www.nps.id.au.
:

It’s easy to write in the history of one’s fantasy world, or at the conclusion to a happy story, that the land prospered under the rule of a wise king and/or queen. But after the many-times-removed Heir of Elendil has been plucked out of the wilds of Eriador, where he’s presumably been studying macroeconomic policy, international relations and urban planning at the knee of Elrond, what does he actually do? And let’s not get started on appointing a bunch of schoolchildren who stumbled into the kingdom through a magical wardrobe.

From The X-Files in Political Context by Ani White

Ani White is a commie nerd currently completing a PhD in Media Studies, focusing on political communication. They are involved in two media projects: a politics and pop-culture podcast at jetpack.zoob.net, and a socialist magazine at fightback.org.nz. They spent many childhood evenings figuring out how to dodge their parents’ prohibition on watching The X-Files.
:

The X-Files is a show that first emerged in a liberal era, then appeared unmoored and confused when it was revived in the age of Trump. In case you’ve been living under a rock, the show portrayed FBI agents Fox Mulder (David Duchovny) and Dana Scully (Gillian Anderson) investigating paranormal cases. This article will focus mainly on the politics of the conspiracy theory mytharc, an early and messy attempt at serialised narrative, in contrast to the episodic Monster of the Week episodes. The core story of the conspiracy episodes is a collaboration between a shadowy elite group and aliens who plan to colonise the Earth. These episodes were mainly written and planned (in a manner of speaking) by series creator Chris Carter.

From The Rise of Black Speculative Fiction by Eugen Bacon

Eugen Bacon is African Australian, a computer scientist mentally re-engineered into creative writing. She is a board director of the Australian Society of Author. Her work has won, been shortlisted, longlisted or commended in national and international awards, including the Bridport Prize, Copyright Agency Prize and Fellowship of Australian Writers National Literary Awards.
:

As an African Australian who’s grappled with matters of identity, writing black speculative fiction is like coming out of the closet. It’s a recognition that I’m Australian and African, and it’s okay—the two are not mutually exclusive. I am many, betwixt, a sum of cultures. I am the self and ‘other’, a story of inhabitation, a multiple embodiment and my multiplicities render themselves in cross-genre writing. As a reader, writer and an editor, I’m increasingly noticing black speculative fiction, and it’s on the rise.