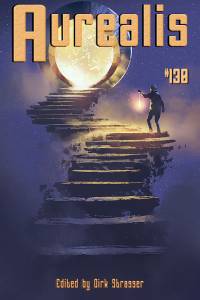 Aurealis #130 features Anya Ow’s gritty space marines’ adventure ‘Last Light’, Stephen Dedman’s post-apocalyptic ‘Bid Time Return’, and R B Kelly’s exploration of identity in ‘Pineapples are Not the Only Bromeliad’. Find out about the real-life ‘Demon Bushranger’ and ‘How to Create Advanced Humans and Aliens’. Lachlan Walter discusses ‘Science Fiction, Politics and the Evolving Nature of Remakes’. Plus Dirk Strasser’s CONQUIST Part 4 ‘By the Throne of the King’ and 20 SF book reviews!

Am I the only one who feels like we’re all inside a science fiction story? An alien invasion by an invisible enemy that strives for existence at our expense? An adversary we don’t understand that is suddenly everywhere at once. An exponential force dominating our world. Who would have thought, outside our fictional speculations, that our way of life was really so fragile? How could our societies be turned upside down so easily? Our natural inclinations so rapidly forced into hibernation?

Of course, it’s not actually like a science fiction story, is it? Not when it really comes down to it. Isolation is too mundane, too mind-numbingly monotonous. The days run together. As we wait for the COVID-19 curve to flatten, it’s our own biological rhythms that are flatlining. If we were in a story, we would have already met our hero, the one who is going to save the world. In real life we don’t know who will find the vaccine. In fact, we don’t even know if one is possible. A vaccine for the common cold has, after all, proved to be elusive. So, what do we do while the world’s best scientists grapple with the problem?

We wait. We self-isolate. We engage in social distancing. We protect the elderly and the vulnerable. And we wait. Waiting isn’t a story. It’s passive. Its heroes are unsung. It has no narrative drive. No palpable antagonist. No climax. No denouement.

So, what does a magazine like Aurealis do in these times? We continue to send out true stories. You know, the fictional kind. The ones that you can experience in every way, the highest and lowest of emotional curves, but then walk away from and head through a portal into yet another story. One of my favourite quotes is by George R R Martin: ‘A reader lives a thousand lives before he dies… The man who never reads lives only one.’

Here are some more lives for you.

From Last Light by Anya Ow

Anya was born in Singapore and now lives in Melbourne as a designer and illustrator. She loves dark science fiction and fantasy, climate fiction, and anything left of field. Anya’s stories have appeared in Aurealis, Uncanny, Strange Horizons, and in 2019’s Year’s Best Dark Fantasy and Horror. Her first novella, Cradle and Grave, will be out in 2020. She can be found at www.anyasy.com.
:

On her birthday, Laura killed herself eight times. It was a good omen, she told Pinn later. Eight was a lucky number.

Stephen Dedman is the author of The Art of Arrow Cutting, Shadows Bite, Immunity and For a Fistful of Data, and more than 120 short stories published and reprinted in an eclectic variety of anthologies and magazines. He's won Aurealis and Ditmar awards and really should update his website, stephendedman.com.
:

The Greyhound groaned and shuddered as it pulled up outside the roadhouse, and the driver turned his head to look at Rob. ‘You sure you want to get out here?’

From Pineapples are Not the Only Bromeliad by R B Kelly

About R B Kelly

RB Kelly’s first novel, The Edge of Heaven, was a winner of the Irish Writers’ Centre Novel Fair and will be published by NewCon Press later this year. Her stories have appeared in Andromeda Spaceways Inflight Magazine (selected for their Best of 2019 anthology), Deraciné Magazine, and several anthologies. She lives in Northern Ireland with her husband and son.
:

It’s a Moment, no doubt about that. But life is made up of moments, an endless parade of freeze-frames collapsing into each other like dominoes, and sometimes you can only see the big ones when they’re already behind you.

From CONQUIST Part 4: By the Throne of the King by Dirk Strasser

Perhaps nobility isn’t a dawn but is, in truth, a flame which burns brightly, shedding heat and light on those in its orbit. Like any flame, it can be quickly extinguished by a gust of ill wind, vanishing as if it never existed and bestowing only darkness on all those that once flourished in its radiance.

And as with any flame in a storm, once it is extinguished, it is impossible to rekindle.

Cristóbal put his quill down and looked up from his diary at the candle. The last words he had written resounded in his head. He reached out and put his finger into the flame, holding it there and watching the light flicker around his skin.

From True Gothic: The Case of the Demon Bushranger by Gillian Polack

Gillian Polack is a writer, editor and historian. She has eight published novels and a collection of short stories. Four of her works have been award finalists. Her latest novel was The Year of the Fruit Cake. Her research is currently about how narratives work and how writers create them. Her website: is www.gillianpolack.com.
:

Once upon a time, a young man attracted the description of ‘the demon bushranger’. His name was Michael Howe.

How his life links to speculative fiction will be slow to explain, but is important.

About B P Marshall

B P Marshall is a television scriptwriter, award-winning short-film writer, and last year won the Fantastica Prize for his debut novel, The Last Circus on Earth, published this year with Brio Books. This article draws on research done for The Last Circus, and his work as former science-journalist with a focus on the frontiers of science.
:

Premise #1:  The most complex object in the known universe is between your ears, reading this.

Premise #2:  Humans are about to collectively destroy their own planet, perhaps even their own species.

Premise #3:  Only species that evolve beyond collective suicide will be regarded as ‘advanced’.

Premise #4:  Only advanced species will travel from their home planet to engage with other species.

Question:     How does a mere sci-fi writer compete with evolution to design an advanced species that won’t inevitably destroy its home planet?

From Science Fiction, Politics and the Evolving Nature of Remakes by Lachlan Walter

Lachlan Walter is a writer, science-fiction critic and nursery-hand (the garden kind, not the baby kind), and is the author of two books: the deeply Australian post-apocalyptic tale The Rain Never Came, and the giant-monster story-cycle We Call It Monster. For more information, check out www.lachlanwalter.com/.
:

Though it might seem an ungracious thing to say, there’s a problem with being a science fiction fan nowadays: there are too many new books to read, and too many new shows and films to watch.