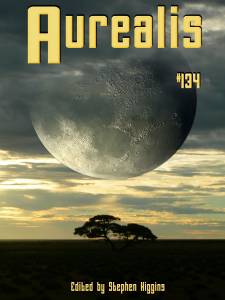 Aurealis #134 continues the tradition of delivering quality speculative fiction to readers worldwide. This issue features three stunning original stories as well as another installment of Dirk Strasser’s Conquist. There are more of the reviews and non fiction articles that our regular readers have come to love, plus more incredible artwork. All in all another great issue!

It has been ages since I have sat in the editorial chair here at Aurealis. Has much been happening? It is ok, I promise I am not going to go on and on about the pandemic. We all know the disruption it has caused, economically, socially and in a welfare sense. However, I do think it is important that we try to keep things on an even keel as much as possible and I for one have been glad that good old Aurealis has been keeping the issues coming this year.
I recently ‘attended’ the 73rd WorldCon in New Zealand. I guess it would be more accurate to say ‘I attended the New Zealand WorldCon in my lounge room’. In many ways it was like any other WorldCon. I had trouble finding rooms, I enjoyed some panels immensely and had clashes with other panels I wanted to attend and, of course, there was controversy and angst. As I said, just another WorldCon. I would like to congratulate the organisers for their work. It cannot have been easy switching from a normal WorldCon to an online one and I think the ConZealand team did a good job. Hopefully their expertise will not be needed to advise the next Worldcon on how to do it.
Speaking of awards (I was referring to the announcement of this year’s Hugo awards at the Worldcon when I mentioned controversy and angst) it was pleasing to see the annual Aurealis Awards went off without a hitch a couple of weeks ago. Again, our congratulations to the winners and to the organisers of this great event.
What else is going on? Lots of genre movies and TV shows seem to be getting released or, at the very least, planned. Of course, it is hard to say when these new genre movies will be seen on the big screen given the current restrictions but hopefully soon. There are also lots of new science fiction and fantasy titles being released and you can read about many of them in our reviews section. Also, I should just mention that if you are suddenly left without anything to read, there are tons of back issues of Aurealis awaiting you at Smashwords/Aurealis.
I am looking forward to an enjoyable ride for the rest of 2020 and I can promise some great reading ahead for the last few issues of the year.

From Cracticus by DJ Daniels

D J Daniels is an Australian writer currently marooned in Sydney. Her latest novel, Green Jay and Crow, was published by Rebellion. Find her (occasionally) online at djdaniels.net.
:

Vida is on the back verandah, sitting on the good bit where she won’t fall through. Even on the good bit, the wood is rough through her shorts. She wriggles her bum away from a nail. She’s drinking something smoky, peaty, sharp. It matches the air she’s breathing. Her lungs aren’t happy, but she can’t stay inside all the time. She thought it might be better come evening.
The ghost is in the backyard again.

From To Sea, A Monster by Danielle Shelton

Danielle’s creative history lies in screen and academic writing, freelancing as a writer, screenwriter and tertiary educator. In 2020 she will graduate with a Master of Creative Arts (research), having previously obtained Bachelor degrees in Film Production and Acting for Stage and Screen.
:

He drowned at the beach that day. Cold skinned, staring eyes, no breath. She dragged him through the shallow water onto the sand then sat back and watched as lifeguards took over. She stared at his face. He was gone. No sign of her husband in that face at all. Had she rescued the right man?

From The Yesterday House by Harrison Demchick

Harrison Demchick is the author of 2019 short stories ‘Magicland’ and ‘The Bead’, which appear in literary magazines Phantom Drift and The Hunger, as well as 2012 literary horror novel The Listeners. As a screenwriter, his first film Ape Canyon made its festival debut in November 2019. He’s also a developmental editor who has worked on more than 70 published novels and memoirs
:

The first time Nathan noticed the Yesterday House was three days after the funeral.
It was a tall and narrow thing, almost emaciated in its way, with a slight inward bend to the wood brought about by years of heavy rain and rot. It was a detached townhouse, separated from the homes on either side by skinny patches of dead grass and soot-stained snow. The door was the kind of red that might have been imposing once, but faded now to a dull, darkening maroon.
The house was dying. But then everything was this time of year.

From CONQUIST Part 8—The Valley of Ashes by Dirk Strasser

Dirk Strasser has co-edited/co-published Australia’s premiere speculative fiction magazine Aurealis for 30 years and founded the Aurealis Awards. His screenplay of Conquist is a Finalist in the 2020 Script Summit and 2020 Creative World Awards.
:

Ithilia was naked with her legs apart and was slowly and rhythmically beating her golden wings as she hung above her bed. Her wings were contorted to enable her to hover in mid-air while facing the ceiling. Ariathe and several other duendes attended to her as she grimaced with each convulsion.

She bit her tongue with the contractions to stop herself from crying out, but soon the stabs of pain became so great her chamber echoed with her tortured screams.

Her wing beats became more erratic as she struggled to find rhythm and her body vacillated between climbing higher and threatening to fall back down to the bed.