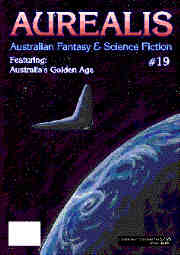 If you read a few old issues of Aurealis you will see constant references to the "Golden Age" of Australian SF. These comments usually refer to the Golden Age as either being upon us now, or just around the corner. Our issue #1 Editorial in 1990 finished with the prophetic words: "Australian literature has never had a Golden Age of fantasy and science fiction. Perhaps it is shining just up ahead." The final words to our Collector's Edition Foreword in 1992 were: "…possibly, just possibly, the Golden Age has arrived." Others have since jumped on the bandwagon and have stated that Australia's Golden Age is happening now. Well, is it? Will we look back in ten year's time and say, "Those were the days"?

There has certainly been a boom in SF publishing over the past five years, and many new authors have had their work published, but does quantity equal quality? I do not believe that we can say that we are creating a new and defining moment in Australian SF history merely by producing more of what has gone before. Yes, there are an awful lot of new books being published by Australian authors, and yes, publishers do seem to be taking an interest in Australian SF and fantasy. However, is the genre being developed by the volume of these new books? I don't think so. Exploited? Yes. Developed? Sadly, no.

I am all in favour of publishers making a buck, but I just think it would be nice if they supported the genre and allowed it to grow and diversify, rather than letting it stagnate in a mire of Quest Fantasies. (In case you are wondering, I do not have an experimental novel being rejected by publishers at the moment.) Publishers will argue that they are merely giving the reading public what they want. I would argue that the reading public is a little more discerning, and that they are simply making do with what they get. No-one could want that many Quest Fantasies.

At Aurealis we have, occasionally, taken a punt. We have published stories that we knew would not suit all tastes. We are mindful of having broad appeal, but we also know that our readers like to be challenged occasionally. If we published Quest Fantasy all the time, or hard SF or horror, we would be accused of stagnating. Australia is experiencing a Golden Age in SF and fantasy, but let's hope it is an age to remember fondly as a step toward innovative fiction, not just a lot of fiction. I would rather that the late 90s were remembered as the years when Australia produced one ground-breaking novel than when twenty novels that tread familiar paths hit the shelves.

This is our Golden Age. The amount of interest being shown by publishers reflects this. The number of new authors, new magazines and their continuing success proves it. But I do believe that it is in danger of becoming a little tarnished. The Gold-plated Age? The genre has made progress in Australia. The fact that this progress may in future be measured by the quantity of books published rather than the quality of those books, is what concerns me.

We at Aurealis like to believe, with some justification, that we have been at the cutting edge of promoting Australian SF and fantasy. We believe that we are the best of our kind in the marketplace. I don't want to go on and on about new authors discovered, sales figures, overseas distribution and continuity of publication but these factors are important. Of these factors we believe that our major achievement has been the discovery of new and exciting writers. This is where a claim for a Golden Age acquires substance. The writing published in Aurealis proves that there is a market for innovative, dangerous and challenging stories. What we need are major publishing houses willing to recognise that taking a gamble on this type of writing is not the long shot they seem to believe.

But on a slightly different matter, a few issues ago I pointed out the need for a credible magazine to grow. I guess that I meant both culturally and physically. We are aware of the need to change, not just for the sake of change, but in order to facilitate growth. We are currently in a phase of expansion by setting up a website on the Internet to complement the existing print magazine. The aims of our Aurealis Online are the same as those of Aurealis. We want to reach the widest audience possible, provide a professional product on par with the best in the world, break new ground and showcase new writers, promote Australian SF, fantasy and horror writing, and support Australian SF, fantasy and horror writers. There will be some surprises in store when you visit the site. We will be using the interactivity of the medium and to do things that are difficult or impossible to do in the magazine. It won't be an electronic version of Aurealis where stories are reproduced to read on screen — many of our features will be driven by you. So, log in and be part of it.

The War, On Drugs – Stephen Dedman

And in a jungle, for God's sake! I'd never even seen a whole tree before they sent me here, and I'd never been Alone. I'd been in an elevator by myself, once, but at least that had a phone. Silverman's compad had two needleholes in it, and Rogan, who was carrying the backup, had been hit by a smartgrenade, so no map and no communications.

I let Chapman keep our compass — I could get lost easily enough without that sort of help — and pocketed as many ratpacks as my webbing would hold. Then, curious, I walked over to where the sniper had fallen…

The Art of Dying – Kirsten Bishop

…"Driver!" she shouted. "Change of plan. Take us to the necropolis."

The woman acknowledged her and turned the chaise uphill at the next intersection. They clattered through the city, a nightmarish journey with Mona falling into frequent bouts of coughing. In between these she dropped into a semi-conscious state. Every now and then the celebrated duellist would look around glassily and ask, like a child, "Are we nearly there yet?"

"Soon," Vali promised her over and over…

The Conversion of Anage – Stephen Lawrence

…A large man bounded confidently towards him, like a friend catching up to greet him. Anage took the first step to sprint away, but another figure now appeared immediately to his left. Then he was overpowered and shoved onto his face in the mud-valleyed cobblestones, and their hands were over him. His money was wrenched from an inner pocket, but they still pinned him to the ground, spreadeagled.

A third figure, with a thick beard slashed grey on one side, squatted closer to where Anage's cheek was held pressed against the blunt stone humps. He spoke very slowly.

"Gabriel came to Mohammed. And he said: ‘Recite!'"

He peered to see what effect this had on his captive. Anage tried to snort away water that was trickling up his nostril. A carrot head obscured his view of the chief assailant.

"Recite," the man said, "In the name of your Lord who created—" he bent even closer "—created man from clots of blood."…

…There was an odd buzz around the bank which Harry noticed as soon as he returned from lunch. There seemed to be more conversation than usual, and a sense of agitation in the air. Excitement would not have described it adequately.

It was only when he'd taken the elevator to his floor that he found out what it was that had everyone talking.

"Apparently he just exploded into flames."…

…After three hours he heard the faint "beep" of the all-clear. The feeder units disconnected and retracted. It took Tucker fifteen minutes to extricate himself from the suspension capsule. For a while afterwards he simply sat cross-legged on the floor — half in shock, half in relief — studying the open suspension capsule from which he'd just emerged.

Originally, the capsules were designed for use in deep space ships launched from the station on a series of missions to Saturn. When the plague hit, that idea fell by the wayside, along with just about every other intended human endeavour…