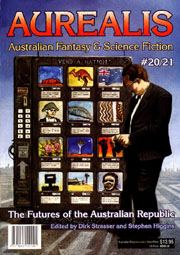 I know what you are thinking: What do the Australian Republic and science fiction have to do with each other?

If you class yourself as a non-SF reader, you’ll be wondering what the Australian Republic has to do with rockets, lasers and aliens. If you consider yourself an SF reader, you’ll be asking what relevance the Australian Republic has to the genre you know and love. Whatever camp you belong in, by the time you finish reading this special double issue of Aurealis, you will have your answer. Hopefully, we will create greater mutual understanding between the two camps along the way.

And let’s not trivialise this activity. SF writers deal with possibilities. They speculate. They make the future seem real. But SF writers, of course, aren’t simply playing imaginative games when writing SF. To argue this would diminish the role of imagination and ideas in human endeavour. Quite the reverse is true. The idea, and the ability to come up with the idea, is crucial to any development and change in life. You can’t achieve anything unless you imagine it first. Before every great invention and before every great journey is the idea. Without ideas and imagination, we are all trapped in the past. Science fiction has always pointed the way forward. SF is, afterall, the “literature of ideas”.

Another question you will be asking is, “Why the title Vend-A-Nation?” This anthology has had a rather complex genesis. The idea of asking writers to produce stories set in an Australian Republic came a number of years ago. I had just finished an earlier version of the story “In Theory” which appears in this issue, and I asked myself the question, “How many stories have been set in an Australian Republic?” I made no self-conscious decision in that story about the political setting. I, like most other Australians, simply assumed that in the not too distant future, Australia would change its government from the present system to one which had an Australian rather than a British monarch as its head of state. It was no great revelation, but it did have implications for my story. Like it or not, politics has a wide-reaching influence on both the material and psychological being of a country.

The thought then occurred to me: if the majority of Australians have been saying for at least the last twenty years that an Australian Republic is inevitable (which they have), has this been reflected in the SF stories which have been written? I couldn’t think of any Republic-based stories off the top of my head. Why would this be? Have all the Australian SF writers not really thought about the issue? Do they consider it irrelevant? But even if it is irrelevant to what the author considers the essential part of the story, surely most of the stories set in an Australian future would have a Republic as the backdrop?

The idea lay dormant for a while until Shaun Tan submitted the painting which appears on the cover of this issue for our consideration. It was a striking image. A man standing at a vending machine with his options being a series of facets of Australian culture. Its title was “Vend-A-Nation”. It struck a real chord and this special double issue was born.

That was only the beginning, of course. We originally called widely for unsolicited stories set in an Australian Republic. The results were mixed and we ended up with only three publishable stories. Too many writers had gone out of their way to make the Republic itself the major feature at the expense of the other elements of good story-telling. We were stumped. Was our idea even feasible? Maybe it simply couldn’t be done.

We then decided to break our cardinal rule of not soliciting manuscripts and approached a number of established SF authors to write a story especially for this issue. This was not done lightly. We don’t solicit as a strongly held principle. We firmly believe, in keeping with the spirit of Australian egalitarianism and giving beginning writers a fair go, that all stories and all authors should be judged equally. Although we are almost on our own within the Australian SF publishing community in the upholding of this principle, we continue to believe this despite the persistent criticism we have received. We also believe that ultimately, we get the best stories as a result. But Vend-A-Nation was a special case, and we had opened it up to everyone first.

It was then that this double issue took shape.

And what an issue it’s turned out to be! I would argue that Vend-A-Nation is Australia’s most important SF anthology of short fiction to date for two reasons: it will fundamentally change the perception that Australian SF has of itself, and it will fundamentally change the perception of the genre within the wider literary community. There’s not a rocket, or laser gun or alien in sight (well… almost). These stories are all about Australia and about an issue all Australians are currently grappling with. The illusion that speculative fiction has nothing to do with “real” life and with “real” literature should be fading. Speculative fiction in Australia should now be seen as a valued part of Australian literature by those who have traditionally been both ignorant and dismissive of the genre. This volume is Australia’s Dangerous Visions. The visions are dangerous because they force every reader, whether of SF or of mainstream fiction, to reassess how they view SF.

And what futures are there for the Australian Republic?

Join me and glimpse what the future holds through the visions of those who have seen it.

"You are looking at me, Dr Norris. I am the computer. I am pleased to meet you. My name is Ajax."

Norris blinked. Boy, he thought, this is good. "How many questions are you programmed to respond to?"

"Any and all, Dr Norris," Ajax replied.

"By they' I assume you mean Professor Cornwell and his team. To answer your unspoken question: Yes, they have come this far.' For all intents and purposes, Ajax is alive. I exist…"

…I toss the antique magazine back to him. "Impossible. She's been dead for what? A decade or so?"

"Security ID gives an 94.7% verification. Do you know what that means?"

Of course I did. But it was still impossible. "Has to be a genetic remake. I saw Elvis Presley at the New Trocadero last week. Dead spit, he was." Digalle huffs, but the scorn's gone before I can protest. "A hologram?" I suggest.

"Do you think we wouldn't sift out the obvious, long before we'd resort to you? Genetic remakes can't catch the nuances. Holograms are unstable. Security ID says it's her."

He shrugs. "As you say, it can't be her. But we don't have any alternatives that the analysis programs like."

I get up from behind my desk and wander to the window. Canberra looks stark under the exposed sun, even with the filters running at maximum. "So Princess Di is skulking about the President's house. What's he worried about? That she wants to assassinate him?"…

Rule of the People – Sean McMullen

…"I presume all these dogs were once human," Diactoros asked, now with a surprisingly reasonable tone.

"Aye, I choose with great care," the Shapemaster assured him. "Fine folk they were, men and women alike  those as were down on their luck. Some, like Tag here, are bright as a button, although she's all dog now. Too squeamish to eat the flesh of humans, so she lost the mind within. Pacer's kept it, though. He rummages in the bins at the hospitals; they yield enough scraps of skin and bloody bandages to keep him human. Five years it's been, eh fella?"…

"I'm only an actor, remember." Adrian Langer glanced from one set of eyes to the other. "How about telling me what you really want, Mr Tha…"

"Thanakis, Mr Langer, Theo Thanakis." He shifted slightly as he absent-mindedly pressed the shift button on his auto-sec. Adrian found it hard to tell whether his dark pigmentation was due to a distant Greek ancestor or a melanin infusion. "We want you because you're not just any actor  you've got the highest neuro-empathic quotient of anyone on our files."

Adrian shook his head. "Okay, so I get right into my roles. It used to be called method acting. I've got a talent for it, but I've got to work at it as well. You still haven't told me why the Australasian Security Bureau wants me…"

On the Continent – Hoa Pham

It was one of those days when you couldn't feel your body, and it was best to stay out of it when the heat came. Sleep was impossible and the air was mugged with beer and spirits.

The wind from the river was cool across the border, sending thoughts of the faraway nearby.

There would be escape attempts  some passed off as a fit of nostalgic drunkeness, others serious, but all with the same conclusion  into the cells you would go and the next morning be transported to the city, away from the state line…

On the morning of the 40th anniversary of the People's Democratic Revolution Jerzhi Kapuscinski woke up feeling like a piece of beef jerky that had been left out in the sun for far too long. He had drunk himself into a stupor at the Hari Krishna Club the night before, celebrating the end of the Revolutionary year with his colleagues from the Bureau of State Security…

"Australia had always rather admired the perceived splendour of the British Empire, so it was hardly surprising that it took the first chance available to get one of its own…"

"Forget about the murder rap," Gauthier says. "But you could go down on the other charges." She looks to Rod Millar for confirmation, watches him nodding as she adds: "The facts seem to say you're guilty." And the two accused are charged with serious crimes. Even leaving murder out of it, Fox and Costas could be put away for years for unlawful homicide offences under both state and federal laws. "You don't deny anything that's alleged against you? Not so far as it goes?"

Dr Peter Costas says, almost sardonically, yet too grimly for that, "No. Not so far as it goes…"

The door to the cockpit was flung open and a steward stumbled out, wide-eyed and pale. "The crew's all dead," he announced to the apprehensive passengers. "We're out of control and plunging into the heart of the sun." Desperately, he looked around the cabin. "I just hope to God we've got an Australian aboard…"