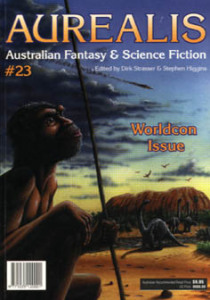 Is there anything unique about Australian science fiction? This is a question we at Aurealis have grappled with since the magazine's inception. In fact, Aurealis owes its birth to this discussion. If Australian SF is no different from its overseas counterparts, then what rationale is there for the existence of an Australian SF magazine?

As you've probably gathered from previous editorials, I'm most definitely in the "yes" camp when it comes to discussing this question. Stephen will be arguing the "no" case in the next issue.

Let me first tell you about a common phenomenon I came across when I used to teach a course called "Writing Science Fiction, Fantasy and Horror". I could always be certain that in a batch of stories from a new class of would-be writers, there would be at least two or three stories set in New York. Now, I used to find this interesting in the light of the fact that the number of people in the class who had actually been to New York was nearly always zero. In fact, it was usually authors who had rarely or never travelled outside of Australia who were the ones most likely to set a story in New York. Their only experience of that city was from television and movies.

This phenomenon always perturbed me. I would always ask the writer the obvious question: why would he or she set a story in a city  and in most cases a country  which they've never been to? The point I would try to make is that a writer, even a writer of speculative fiction, writes most effectively if their work is grounded in what they know. If the only experience they have had of a city is second-hand, it is impossible for them to provide anything fresh. What is the point in writing if you are doing no more than rehashing other people's visions?

As you can probably guess, I didn't often go unchallenged when I expressed this view. The justifications from writers for their choice of setting usually vared from "New York is where exciting things happen" to the slightly more sophisticated argument that "science fiction is about technological change, the USA is the most technologically advanced country in the world, so it is therefore logical that a story relying on technology should be set there."

I think these views reveal that the cultural cringe is still deeply ingrained in Australian SF circles. Most of these would-be writers use the Internet most days. Their stories are typed out on the latest version of Office. They live in a country whose scientists are right up there in the world arena of biological reasearch  and it's in this area where much of the cutting edge speculation in SF writing is happening. And yet, they don't think to set their SF story in an Australian city. This is actually the most damning part of the whole thing. Not only do these writers set their stories in New York, they do so often without even considering the alternative. Melbourne, Sydney or Adelaide don't even cross their minds.

There is often another defence that pops up in our discussions along the lines that the setting isn't really important anyway. Well, if it really is totally unimportant, then don't name your city at all. If it is important enough to warrant the mention of its name, then why not set it in an Australian city? Why are we defaulting to New York, not our own?

What I'm suggesting, of course, applies to far more than just the setting of a story. New York is only a manifestation of it. If you have grown up in Australia, and you are writing close to your core, then your work will necessarily be something essentially different from a work written by someone who has grown up in America. Australian and American societies are different. As a consequence, the people from these societies are different. Not alien-from-another-world different, but certainly different in a myriad of subtle and not so subtle ways. Is one default better than the other? That's a meaningless question. The absolute value of one over the other is not what I'm talking about here. What is important for each writer to do is to assess how close their default is to their own core.

That's what I've seen as part of the role of Aurealis: to give Australian writers a reminder of their Australian core. I hope we've succeeded.

Dust from the last Visitation  two weeks ago as of yesterday  had turned the sun putrid. Jaundiced, like an old photograph, Danforth thought, remembering some sepia prints he'd found in the ruins of his parents' home. They showed an open-air scene, clear and bright. A picnic. The then-young Danforth had trodden on a few ants, no doubt, but had never imagined being trodden on homself. Once, life had maintained an illusion of comfort and proportion…

…Carn took a moment to survey the ragged, beaten group of men he had managed to pull back from the last assault. The Quiadern were stronger now than ever. Carn did not know how the Lady Elaine had expected him to beat them back. Across the field the sharp, black lines of Quiadern spread wide across the horizon. They had backed away slowly as they saw Carn begin to pull his men back, and Carn could almost hear the victorious laughter coming from the black-and-orange command tent. He could hold his men together for one more charge…

…She had always known she was different. It hadn't come as a revelation or a moment of reflexivity. She didn't stand suddenly outside herself, look back and think, I'm not like all the others. No, she had always known…

…Jane took her seat and checked the machinery. She always double-checked to make sure that the technicians had calibrated the controls correctly; results could be disastrous, like what had happened to Crazy Nay. Satisfied, she carefully placed the helmet on her head, went through the ritual conduct, and activated the REM core.

Jane felt the line between conscious and unconscious blur, the light and the dark melding into a cloudy, incoherent grey. She could feel the six patrons dimly on the outskirts of her awareness, and she pulled them in…

The tale is told in a series of dreams.

The first is the dream of the Birth.

Antiseptic and screaming, the harsh squeak of the trolley, the drips and the needles and the oxygen mask. The hideous overpowering sense of emergency. The ambulance falling behind, still wailing, the doors open and beckoning. Like a mouth…

You lie in your bed, tracing the cracks in the ceiling with your eyes. It is the eighteenth time today you have done that, and there will probably be room for another three before lights out…

Bans? My heart jumped and I was instantly awake, throwing my othersense outward. A second later I had located them: a large group of men riding swift-footed nayahs. I pushed the hands away, sat up and, with a thought, lit the map hanging over the door…