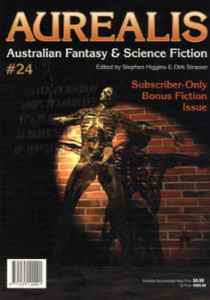 Stephen Higgins argues the “no” case in the ongoing debate about whether there is something unique about Australian science fiction. Dirk Strasser argued the “yes” case in issue #23.

Is there a defining element in Australian SF?

Are there works of SF, created by Australians, that are uniquely Australian? Maybe there are. For my money the work of Terry Dowling, particularly his Rynosserous stories, have that certain something that marks them as “Australian”. It is the “feel” of the stories… the openness, perhaps. Certainly the Australian element lies within the sense of place that Dowling creates. So, for the moment, let us assume that there is a recognisably Australian SF.

Now, what are the strengths of SF? Generally, I mean. What are the factors that make SF such a popular genre? There are a number, but I am thinking here of one of the most important: the ability to imagine other worlds. This may stem from a desire for pure escapism or it may flow from a wish to examine the human condition using alien landscapes as a contrast. Whatever… My point is that the imagining of other worlds is a staple of SF and always has been. It is one of the things that speculative writers do better than anyone else. The natural corollary to this is that no “place” should be beyond the comprehension of a talented writer, therefore writers should be able to imagine a place that has within it that Australian feel.

Perhaps I am attributing the Australian element to the place rather than to the writer. I write Australian SF. I live in Australia. I am Australian, although not by birth. But, leaving aside all other cultural and social contexts, I think that I would be writing pretty much the same sort of thing if I had grown up in England. I think that most Australian SF could have been imagined by any gifted writer living anywhere in the world.

To claim that a distinct Australian element exists in Australian SF is to deny the creativity of our writers and smacks a little of jingoistic nationalism. I just don’t think you can apply a generalisation like this across the whole genre here in Australia.

Another factor to be considered is the increasing homogenisation of the SF world. Writers in Australia generally attempt to sell in international markets. Any self-conscious insertion of some Australian element simply to make the story different from the rest of the pack almost always leads to a dull story. We see this time and time again with overseas writers attempting to sell stories to Aurealis. The few overseas writers that we have published have simply produced good stories. We see it more often from our local writers. They do not reflect an Australian concern or viewpoint, nor do they contain any element that can be identified as uniquely Australian. The poor stories have kangaroos in them, metaphorically speaking  although sometimes literally. Kangaroos do not an Australian story make.

What is in a good Australian SF story? A good plot. Good characters. A well-realised sense of place. In other words, all the things that make up a good story anywhere.

The Old God Begins to Reassert Himself – John Ezzy

…"It's about time I found you," said a wry female voice. The woman slipped soundlessly from between sagging trees. "And a good thing, too. You wouldn't survive for long, out here in the open."

Her name was Valerie, and that was about all he knew for certain. Her presence inspired David with very mixed emotions, though he couldn't have said exactly what those emotions were. She obviously knew him.

"I can see that you're confused, David…"

"For luck, Jorge. To hope the tomb is intact. Otherwise I've wasted four months on an empty cavern. And the Chancellor is already breathing down my neck."

"If dead place is empty, my village dies. Fingers do not change this, don…"

…"What's this?" asked the child. Now the talking had quietened, as though all the people were on their best behaviour at the long, white tables.

There was a general sweeping of glassware up and down, of dark wines and voices muttering for the feast  let the feast begin. Then the spoons dipped; heavy, hollow spoons, and they were supping…

The Love of Beauty – Kirsten Bishop

…She inspected his studio thoroughly, the glittering carnival face regarding each and every painting. At last she said, "Yes. You do have a talent for idealisation. But you will also need courage. If you have it, it does not show in your work. Are you brave?"

He was taken aback by her bluntness, though he couldn't deny the accuracy of her assessment. But what sort of horror could be hidden under the mask that he would need more than ordinary bravery to look at it? His mind immediately conjured up some very unpleasant things. Still, he felt she was being overly theatrical. Somewhat on his dignity, he replied that while he was obviously not a soldier or any sort of hero, he was not a craven man.

"Prove that," she said, "and I will commission you. Whatever your usual fee is, I will pay triple. Danger should offer rewards, after all…"

…He awakes with a start. It is already hot in the tent and something is crawling on his belly. He fights to control himself and slowly unzips his sleeping bag, peeling it off his sweaty torso. He looks down.

The spider is centred on his stomach…

It was my job to watch, not to intervene. Bodyguards were rare on Earth in 2282 Gregorian, but Thurston must've figured the experiment of a lifetime needed protection  or maybe he just wanted a witness, I don't know.

I watched on the monitor as he ushered her into the office. She was fragile and beautiful, very much the dancer. Her thick, rich hair fell down to her waist. It was the colour of ripe maize. I sat in the cubicle, watching, listening. Thurston was speaking with an undertone of excitement in his voice.

"What you're suggesting is incredibly dangerous…"

…Eventually, Jack asked the question that had been bothering me since he told me we were leaving home. "It's been nice to catch up with you again, Jean, but why have you called me back? I know you wouldn't have called me just to talk about old times."

"It's over, Jack. The crusade has come to an end. The last of my troop has died and come home…"

Travis waited patiently for her in the shade of the ancient thamber oak, its limbs bowed to the ground by the weight of a parasitic strangler vine. This was their favourite meeting place.

Through the myriad chinks in the foliage he could feel the radiance of his moon tickling his skin. Despite his best efforts to ignore it  how horrible to have that tragic moon as his own and not some other, and at such a young age!  it would not be denied, and he could feel its power trying to force itself under his skin. With a sigh he stepped deeper into the shade, but somehow he could not find a place entirely free of its dismal influence. He sat once more and waited. Shortly he heard a soft footfall and the susurration of the vine being drawn apart. Cool hands covered his eyes…

Please Check the Number You Have Dialled – A John Wallace

When Macarthur Peel opened his eyes, he had no idea who he was. He knew his name  that wasn't the problem. It was just that he didn't recognise the body. It looked Japanese…

…The thing lurched forward with its huge arms reaching, flailing the claws it had wrenched from the unfortunate animals. Its lips parted to bare teeth chipped from marble tombstones in a leer all too familiar. At once I found a use for my limbs, jumping up and slapping my hands against the wall. But terrible pain flashed from my ankle and next thing I was falling. I hit the water and went under, surfacing an instant later, coughing out a mouthful of the crimson water, gagging on its vile taste. I struggled to my feet again in an utter panic for I was sure Everton must be now upon me…