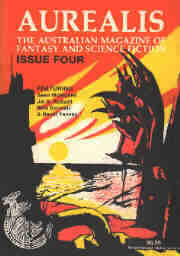 A few of the wise heads of the Australian SF scene shook when Aurealis first came out. "You'll be struggling to find enough good material," they said. "Four issues a year, 132,000 words  there just aren't that many writers of quality science fiction and fantasy in Australia."

How wrong they were!

It's amazing what a reliable, widely distributed, paying market can do. The editors of Aurealis have literally been swamped with material this year  and a significant portion of it is outstanding.

This issue in particular is full of exceptional stories  all of them Australian, and none of them published before.

Four writers who appeared in our first issue last September make their reappearance in these pages. Michael Pryor's evocatively titled "Softly They Go Feral in the Night" seems ostensibly to be a hard-bitten detective story set in a tough milieu, but it is in reality a poignant tale that, unfortunately, has echoes in our own society. With "Manoeuvres Off The Great Attractor", David Tansey once again takes us into deep space, as he did in his issue one story, but this time the space travellers spend all their time trying desperately not to go any deeper.

Jai S. Russell has made her mark as one of the few stylists that Australian science fiction has produced. "At Bright Star's Coming" is a beautifully crafted piece which carries an alluring yet venomous sting in its tail. Although Sue Isle's "Remembering Names" is very different in tone to her first story, we again witness a bizarre merger between spirit and machine  this time in a process that spans four centuries.

Sean McMullen is clearly not resting on his laurels after winning this year's Best Short Fiction Ditmar. "The Dominant Style" is a deceptively gentle story which depicts science fiction's first art deco Utopia. Lesley Foley's "All Their Worldly Goods" is filled with ironies, not the least of which is that the reader has the same voyeuristic intent as the wealthy " maggots" that burrow into the minds of the two time travellers.

In his story, "Log Recording Found in a Dead Man's Gut" Rick Kennett, Australia's own reluctant ghost-hunter, has successfully merged science fiction and horror with particularly chilling results. Grai Hughes' "Twenty-First Century Dreamtime" is an enigmatic fusion between "Crocodile Dundee" and the works of J. G. Ballard. The author had intended to expand the story to novella length, but in his research discovered that aspects of the extended version would offend certain taboos of the Aboriginal people.

The editors of Aurealis have their own taboos, and unfortunately there is one which a number of writers are breaking. Despite the clear statements in our guidelines and elsewhere, we have simply had too many queries and submissions without stamped, self-addressed envelopes (SSAEs). Please note that from now on, we will no longer respond to anything sent to us without a SSAE. Manuscripts without one will be held for three months and then destroyed.

On a more positive note, this issue contains our first readers' poll. We want you, our readers, to tell us which stories out of the first four issues of Aurealis have been your favourites.

There has been only one disappointment since the birth of Aurealis, and that has been the dearth of letters for our proposed "Letters to the Editor" page. We still intend to have a regular letters page, but we need your support. Please address any comments you would like to have published to "The Letters Editor".

Let's start the ball rolling: the following pages contain, without a doubt, the best collection of Australian science fiction stories ever assembled in the one magazine.

Softly They Go Feral in the Night – Michael Pryor

"Do you know how many Feral Kids there are out there? Don't answer. No-one does. They're not counted. They're wiped off the books. They roam around the back ways and underground of the city, picking up what they can, surviving in a way that is unimaginable to anyone not in it. It's a mess, a cesspit where they live. And you want me to find your sister…"

"The Salvation Army says there's about 500,000 Feral Kids out there. But my sister's different. She's my sister!"…

Deena drew her silks close around her, shielding herself from the wandering coolness of the night. Later, at the time of two moons rising, that coolness would grow upon the winds spinning across the empty sands, would be chill and fierce; and she wondered briefly if her fragile, ageing limbs would buckle and betray her then, if the winds would wrest her scant refuge from about her crouching form to send her spinning and tumbling endlessly across the empty waste. She wondered again why she had come…

He was tied to the stake in the town square so that he couldn't move, not even his head. The straw was piled up to his chin. Dry straw, to kindle swiftly. "Breathe in, " one had told him  one kinder than the others. "If you breathe the smoke, you will die swiftly and feel no pain."

"And how do you know?" the victim had answered. "Have you died before?" …

… An abrupt current hit the skip. I was almost dislodged, and the nearsee image juddered until I was reminded to disconnect it. The Outsider was knocked marginally sideways onto another line  but still in a downward glide, ever deeper into the funnel.

I swivelled my neck, switching to farsee and engaging several implant sensors in the bio-clad encasing my head.

"We have now entered the Inner Lines," I spoke, adding a certain shame, into the comm implant. "This has not happened since two genrations ago."

More of a shame to have happened on my shift…

All Their Wordly Goods – Lesley Foley

David turned to smile at Maggie as they sat side by side in black synthskin chairs. After being back only a week, her skin was already losing the healthy, golden glow it had taken on while they were away. A young male technician placed a headset over each of their heads. David reached out and took Maggie's right hand in his. He intertwined his fingers with hers and whispered, "Now we get to relive it."

"So do the maggots," she whispered back…

The sphere  my sphere  is built of stone, cut and measured orange sandstone blocks, washed through with yellows and reds, desert pastels, all cemented together with a resinous substance, flaking and coloured like dry blood.

Over four metres in diameter, it rests in a bowl-shaped depression on a cliff that overhangs a meandering offshoot of the East Alligator River which flows murky brown and sluggish, a hundred metres below.

Some humorist had scrawled "Janitor" on my coffin. It'd been a joke with the early corpsicle ships, but nowadays it was wearing thin. Besides, I'd only had a month's sleep … subjectively speaking  and I was in no laughing mood. Usually a corpsicle jockey can count on a straight sleep in, a cold run all the way without being wakened to tend to a loose bivot, or a decubed primary thermal transfer, or a cryogen valve packing up on one of the passenger coffins  "module" as they're properly known. Being woken only three weeks into the voyage made me feel… well, cheated somehow…

…I extended my right hand to him, my skin crawling with fear again. For me, first contact. Did I have the gesture right? Was there some subtle movement that I had missed  obvious to them yet lost to me?…