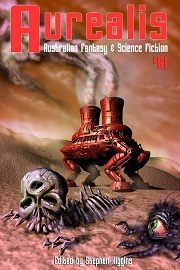 Another startling, pleasing, satisfying, provocative and enjoyable read. Aurealis #61 delivers the quality fiction you have come to expect, plus all of the usual news, views, interviews and reviews from around the traps. Get it. Now. No seriously, stop reading this and go to smashwords and get it. Just type in Aurealis in the smashwords search box. This is me doing what I told others to do in the editorial.

From the Cloud — Stephen Higgins

I work at a public high school. Our librarian recently decided to put all of the Science Fiction into one section. It seemed odd to have so much in one place and then I realised that (obviously) the books in front of me were by a lot of different authors. No librarian would have let so many books be misplaced like that and that was when she told me that they had decided to pool the Science Fiction onto the one shelf. I pointed out that it was a great start and what were they going to do with all of the books on the shelves nearby?

They had assumed that the books they had put on this one shelf were all they had. I asked about Brave New World and I asked about 1984. I wondered if Fantasy was going to get a place. I asked about Horror. I even (reluctantly) pointed to the half shelf on the other side of the aisle that supported the Harry Potter books.

‘Ah,’ she said. ‘We didn’t think about that.’ Upon reflection, she realised that if she went ahead with her plan, half of the library would be filled with Speculative Fiction and the other half would look a bit light on.

The debate about what is SF continues with new players. The recent success of the Marvel films (The Avengers, Iron Man 1, 2 and 3, etc) as well as the rebooted Star Trek and rumoured Star Wars franchises keep putting SF in front of an audience. But many people don’t know just how broad reaching SF is out there. I cut my literary teeth on Marvel comics. I recently looked through some very old copies online. They were full of literary allusions that escaped me back then, but which surprised me when I recognised them. I don’t know how I went from loving the X-men to reading Asimov and Alfred Bester but the progression seems entirely logical.

So how does the new audience of SF get from The Avengers/Twilight/Harry Potter to reading quality SF? I recall my older brother reproached me for reading childish nonsense and that I should read good fiction.

He was reading Brian Aldiss at the time so I tried that. Liked it. Found more. Tomorrow’s SF audience will discover SF by being told about it or at least being exposed to it. I know our librarian tells students about other Speculative Fiction they may like when they return a book ('if you liked that, then you may like this… ', as seen on many online bookstores). Okay, she can’t just point to a shelf and direct them to it, but she can indicate that there are lots of different types and that it doesn't take too much effort to find it. Happily she is able to show them old hard copy Aurealis issues as well.

If you know someone who is clearly smitten with SF or perhaps even just starting out, do them a favour and at least let them know that there is a lot more out there than is shown in the main stream. They will love you for it.

The worst nightmares aren't of blood and monsters and darkness. The worst are the ones that creep up on you, that start so quietly and lull you into a false sense of security, and then…