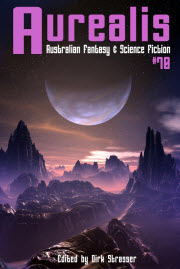 This issue features ‘The Stain on the Lake’ by Matthew J Morrison, a dark, chilling piece with characters to die for, and ‘Wrecked’ by Ephiny Gale, a new twist on the reality television theme, which is sort of ‘Truman Show’ meets ‘Survivor’ meets ‘Eternal Sunshine of the Spotless Mind’. Don’t miss Shane M Brown talking about how his Aurealis story is on the verge of making it to the silver screen.

The Stain on the Lake—Matthew J Morrison

From Aurealis to (hopefully) the Silver Screen!—Shane M Brown

I have two totally different ways of approaching books versus films. I almost never walk out of a movie, no matter how bad it is, yet I frequently stop reading books that I’m not enjoying. I suppose the time commitment is part of it. A movie is a block of two hours of my time, while a book not only takes up more hours, but they’re stretched over a much longer period, and each time I put the book down, I’m forced to make a decision the next time about whether it’s worth returning to.

I think there’s more to it than that, however. When I read a clunky book with plot inconsistencies, poorly delineated characters or pedestrian prose, I’m constantly thinking not just about what’s wrong with it, but how I could write it better. In the back of my mind, I guess I’m aware that, if I really wanted to, I could have a go at a rewrite or, at the very least, make sure I don’t make the same mistake in my own writing. Theoretically, I can make the writing better. A movie is very different. I know that I can’t just sit down at my desk and make a movie. I can sit down at my desk and write a movie script (which is what I’ve been attempting the last few months), but, of course, at most writing is only a blueprint for a movie. It’s not even close to actually making a movie.

I know a bit about the novel writing process. I’ve been doing it for years. I’ve read articles on it. I’ve done courses on it. I’ve taught courses on it. But movie making is like alchemy for me. Although I’ve seen the end product many times, I don’t really know exactly what all the ingredients are and how they interact to produce it. There are too many people and too many factors involved.

Earlier this year I was contacted by an author who was seeking an assurance that Chimaera Publications didn’t hold any rights to the movie version of his Aurealis story. I assured him we didn’t. Shane M Brown was the author, and the story edging closer to becoming a movie is ‘Lucy Lucy’ from Aurealis #29. Shane tells how Aurealis and Hollywood are maybe not as far apart as we thought in his article in this issue: ‘From Aurealis to (hopefully) the Silver Screen!’.

‘Lucy Lucy’ was shortlisted for the 2002 Aurealis Awards, but the issue in which it appeared is now unfortunately out of stock, and Aurealis readers who don’t already have the issue can only look forward to seeing the story in our upcoming ‘Best of’ anthology.

So, you never know what can happen to you if you publish in Aurealis!

In this issue we have ‘The Stain on the Lake’ by Matthew J Morrison, a dark, chilling piece with characters to die for, and ‘Wrecked’ by Ephiny Gale, a new twist on the reality television theme, which is sort of Truman Show meets Survivor meets Eternal Sunshine of the Spotless Mind.