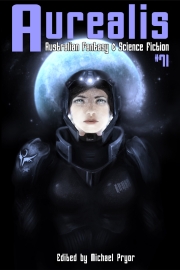 Aurealis has a proud history of publishing fiction in Australia. Since our first issue, we have introduced new authors to the reading public and given established authors a means to continue their relationship with their audience.

These are some of the things we’ve learned over nearly twenty-five years of selecting stories for publication.

From Ascension by Michael Grey

Husband, father, writer of tales and Grand High Priest of the planet Doodah. One of the above is untrue.
:

They come at night.

That was the way the tale always began. ‘They come at night,’ nan would tell them as they huddled beneath the furs, their three bodies, pressed tight against each other, compensating for the cold outside. They would pull together as close as humanly possible and stare at nan over their knuckles.

Emma is a fiction writer and poet from Melbourne, Australia. She was once engaged in a bear-hug so epic in nature that both parties fell over. She has a large collection of robot t-shirts and uses comic books as wall art. She loves new books and new music and will happily share both.
:

Breaking camp was as easy as tipping out the last handful of worn tea leaves and bundling the empty flour sack into his swag. Evan pushed dirt over the glowing embers within his fire pit. There was nothing left of his supplies, not even salt. Last night’s damper was a heavy memory. Food meant dealing with people and towns. It meant the possibility of broken knuckles, of slaps and cursing and hunger, of belonging to someone else. Perhaps it was better to starve in safety, but his belly cramped and it drove him up and onwards. All of his water was gone and the dams were low. Yesterday’s tea had been half-mud.