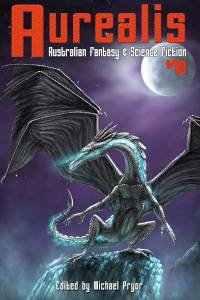 Now in its 25th year, Aurealis keeps up its tradition of bringing you the finest in Fantasy and Science Fiction. Issue #78 has the bracing neo-noir ‘Enfolded’, from J Michael Melican and the punchy ‘Discarded Pieces’ from David Coleman. Terry Wood brings us visions of the future in the first part of his History of the Flying Car, and, as always, Aurealis brings you the best in reviews. Aurealis, when only the best will do.

Hard SF can be a hard sell. Of all the multifarious and diverse aspects of Science Fiction, Hard Science Fiction is the one most likely to get non-readers recoiling in horror. It’s the SF sub-genre most parodied, most vilified and most misunderstood.

Which is a shame because, as with most things, the best of it is superb. Hard SF discusses, foregrounds and takes seriously an aspect of modern life that is shamefully neglected in literary fiction: science and technology. If these feature in literary fiction today, it’s superficially or with, at best, a jaundiced eye.

Let’s foolishly venture a definition: Hard SF is the branch of Science Fiction where accurate representations or extrapolations of science and technology are vital to the story. It has many overlaps with Space Opera and other SF sub-genres, but fuzziness like that is part of the glory of genre definitions.

If you like to write Hard SF we’d love to see it. But before you do, it behoves you to read and study those who’ve done it before, and done it well. Here are some suggestions.

One of the great Hard SF adventures; this rattling good yarn takes the notion of the alien artefact and runs with it, imagining an artificially constructed world that rings a sun. The world is nearly two million kilometres wide and has a diameter roughly that of Earth’s orbit around our sun. It’s a jaw-dropping conceit, and it’s just the backdrop for a shipwreck story of monumental proportions. Great fun.

The first of a trilogy, this book is a rigorous examination of exploration, where humanity is opening up Mars for colonisation. The technical, engineering challenges are foregrounded, but the ecological and the political are by no means ignored. Absorbing and ultimately moving.

Australia’s own Greg Egan . It doesn’t get much harder than this, with quantum ontology, artificial intelligence and simulated reality just part of this onslaught of cutting edge concepts. It’s philosophical, abstract and dense. Tasty stuff.

Space, with all of its unlimited possibilities. Lots of nanotechnology, human modification, and heavy spaceship engineering doesn’t overpower the character exploration and interaction, which is sharp and profound in this far future world.

More nanotech in a society in our asteroid belt. The everyday difficulties of living in such a hostile environment are presented with verve and panache, with a rogue artificial intelligence thrown in for good measure. This is extrapolation of the best kind. It’s careful but creative with its prognostications and never forgets the importance of a strong narrative.

Inspired? We hope so. Now, get out there and write some tough, convincing Hard SF!

From Discarded Pieces by David Coleman

David Coleman is an award-winning writer and poet. His writing has appeared in Winds of Change, Next, Kaleidotrope, the Grapple Annual and the Canberra Times, amongst others. He has been short-listed as a Writer of the Future. You can find David here: davidcolemanwords.wordpress.com.
:

Amidst a twisting field of rapidly freezing wreckage, she floated, miraculously unharmed. She looked around carefully, just her eyes moving within the slowly cartwheeling exoskeleton, worried that even a head movement might attract attention of the very worst kind.

From Enfolded by J Michael Melican

Josh Melican was raised in central Victoria, moved down to the city to study, and after nearly two decades of city living, still considers himself a country-boy. He graduated from Monash University some years ago with Honours in Creative Writing and the sudden realisation he'd need to get a job. You can find his musings, rantings and occasional moments of clarity at jmichaelmelican.com.
:

Even in the dim light I easily made out the man I was here to see. He was young, fashionable, loaded with tech, a sleek laptop and a smartphone on the table in front of him, expensive headphones around his neck. The girl he was talking to was close enough that she had to be someone he knew, but he was awkward, stilted. I could make out a little of their conversation, but nothing meaningful. He said cool like it was punctuation.

From Preparation: the Key to Effective eBook Marketing by Shane M Brown

Father of three, Shane M Brown was born in 1974 and writes from Brisbane, Australia. He attended James Cook University from 1991 to 1998, graduating with a Bachelor of Biological Science with majors in Zoology and Archaeology, a First Class Honors Degree in Underwater Archaeology and a Masters Degree in Environmental Management. In addition to PLAZA, his two other novels are titled FAST and MELT.
:

Anyone who read my articles in Aurealis last year will recognise a common theme.

I write about online publishing and marketing.

There is a mountain of information available on the internet about every facet of online marketing, but it’s usually the same information regurgitated again and again.

I won’t be repeating it here, and I’ll tell you why:

From The Secret History of Australia - Wally Grogan, King of the Legumes researched by Michael Pryor

Michael Pryor is a novelist, researcher, raconteur and bon vivant.
:

Cousin of V B Grogan, the famous mountaineer and hypnotist, Wally Grogan was interested in horticulture from an early age after he accidentally composted his teddy bear. As a teenager he enjoyed experimenting with mulches and groundcovers, and his cactus garden was the talk of the neighbourhood after it accidentally foiled a burglar’s attempt to break into the family’s Geelong (Vic) home.

Terry Wood spent the last couple of decades immersed into the worlds of academia, government and party politics. His passion for everything SF from the days of Gigantor, Thunderbirds and Prince Planet has not waned and he now writes and edits, while still dabbling in a bit of politics. This is his first piece for Aurealis.
:

George Jetson heads off each morning in his flying car. Drops off the kids at school (literally). Jane takes his cash (they still had cash?) to go shopping, then he arrives at work, presses a button and his flying car folds into a suitcase. He hops onto the people mover, arrives at his desk and puts up his feet.