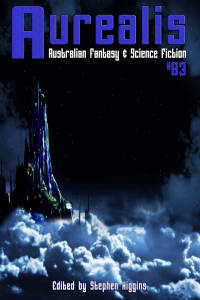 Fantastic fiction plus all of the usual reviews and articles plus an interview with Peter Hamilton!

It has been a big couple of weeks for space fanatics. We have had the Pluto fly by which got everyone excited and then the announcement of more funds for the SETI project. Both of these things got me a little nostalgic. I was in Grade 6 in July 1969 when the lunar landing took place and all of this Pluto talk made me remember the grainy overexposed images that came back live from the moon. And I loved the crystal clear images that were released a little later. So it was nice to start off with very clear images from the New Horizons craft with the promise of much better to come.

I suppose it was this experience that added to the announcement of more funding for the SETI project. New worlds inevitably lead to thoughts of new civilisations… to boldly….No I best not go there. The lunar landing does not seem all that long ago. But time is weird and it really does get weirder as you get older. Many of you know that I am a High School teacher. I recently showed a film to my Year 10 students. It was made in 1998. Now I don’t think of that as long ago at all, but one of the students remarked that the film was older than her. I thought that was scary. The film was a made for TV version of Brave New World, and the bright lights and cool futuristic trappings of that world have not aged well. The novel of course was full of fantastic ideas and challenging concepts… back when it was written. But its challenging ideas have been done to death and the students did not think it was very interesting at all.

That’s why I like reading the stories that we present here in Aurealis. They keep on reimagining the futures. There are lots of Brave New Worlds with marvellous people in them published all the time within the genre. It is a privilege to bring you more of them.

PS. I can’t really recommend the filmed version of Brave New World. It is pretty ordinary. Although it is interesting to see Leonard Nimoy in anther role. You will notice I said interesting, not ‘good.’ However, I did notice that Steven Spielberg might have been looking into making a new version. Time will tell.

From Unicorns on Mars by Tracy Washington

Tracy Washington has been creating stories since childhood, but makes her living as an IT analyst producing written artefacts such as business requirements. She attended Clarion South 2009 run by the Queensland Writer’s Centre—a pivotal experience in her writing life. Tracy subsequently completed her Diploma in Professional Writing and Editing at RMIT University and has been evolving a number of s
:

‘Do you ever wonder, Doctor, if all the birds were gone, and there were just one left, would that last bird have any reason to sing? If there were no more point to her song, would she know how to finish? Does a bird know about beginnings and endings? What’s a beginning anyway? Or an ending, for that matter? How can anything ‘end’ while the universe exists?’

He’s thrown by the suddenly confident tone in the girl’s voice.

‘Is this something you think about a lot?’ the doctor asks.

From Perfect Kills by Chris Large

Chris Large lives in Tasmania with his two wonderful kids. His recent work has appeared in Andromeda Spaceways Inflight Magazine, Damnation and Dames (Ticonderoga Publications), and is upcoming in Stupefying Stories and A Killer Among Demons (Dark Prints Press). He’s currently completing an MSc while intermittently exploring for gold in Macedonia. His story, ‘The Red House’, appeared in issue #58
:

I have arranged to meet Ilesha at the Grand Palm Waterfront at 3:00am APT. I am now Mark Richardson. I have implanted one hundred and forty two retro-dated points of reference to Mark into this planet’s datasphere. I am a self-made billionaire looking to invest in her bank’s largest client. I want Ilesha to broker the deal, which is unlikely to occur if I resemble a wrestler named GutPunch.

‘Sheee-at! The Grand Palm?’ says my driver, raising his coarse, bushy eyebrows. ‘Never dropped anyone there before. Don’t know if they’ll let us through screening.’

‘Sure, Sid,’ I say. ‘We will need to stop along the way to pick up some flowers.’

‘Hah,’ Sid says. ‘You want to impress a dame? I know just the place. I like you fella. I’m gonna look after you real good.’