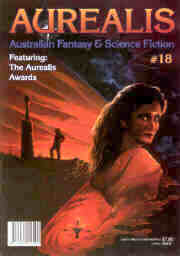 A few years ago a friend of mine was studying short story writing as part of an Associate Diploma in Writing and Editing. One of the class tasks was to analyse the winners of previous Age Short Story Competitions to try to find a pattern in the type of story that usually finishes in the top three. For those not familiar with this competition, the Age Short Story Competition takes itself quite seriously as a literary competition. Anything that could be reasonably categorised as science fiction, fantasy or horror doesn't get a look in.

The follow-up task for the class, once they had identified common threads, was to write a story which met the criteria and submit it to that year's competition. As it turned out one of the students from that class ended up finishing in the top three stories for that year. Coincidence?

In a similar vein, a writer who has had several stories published in Aurealis, and whose fiction output was almost exclusively SF, decided a couple of years ago to write a story for the literary magazine Overland. He identified a number of features of a "literary" story and wrote accordingly. The story was published in Overland.

Let's have a look at the implications of these two incidents. They suggest there are a number of clearly definable features that constitute a "literary" story and, further, that it is possible to consciously and deliberately write to these specifications in order to produce "good" (as viewed by the judges of competitions and editors of magazines) literary stories. In the case of the Age Short Story Competition, some of the identified features were: a narrative which included a physical journey of some kind (often mirrored by some sort of self-conscious internal journey), the use of similes and metaphors which juxtapose incongruities, and a suggestion or undercurrent of some sort of sexual perversion.

The point I am trying to make should be starting to become clear. Genre writing such as science fiction, fantasy and horror, is often disparagingly referred to by members of the literary establishment as formulaic writing. "Literary fiction", we are told, has no formula.

On a more positive note, Arts Victoria, showing considerably more vision and a wider view of literature than its federal counterpart, has awarded Aurealis a grant over three times larger than previous years. Chimaera Publications would like to thank Arts Victoria for its continuing support. Thanks to Arts Victoria our Website will be up and running in 1997!

…At a magazine kiosk, my own face gazed back at me from the cover of Time. A newspaper headline read, American Carrier Fleet Rumoured to Arrive Today  UN Debate Continues. The shop assistant stared at me like a frightened rabbit.

She whispered into her sleeve again. Thirty seconds later a large car with black tinted windows pulled up beside us.

"Go," said Grace, as the doors closed behind us. The driver didn't bother asking where.

Mount Taranaki seemed much closer since the aliens had landed…

…"It happened again?" said the doctor.

Simeon knew better than to lie. Every bio-sensor in the room would scream indignantly if he attempted it. "A little."

Two things got me on a prime scale back-step. Well, three things if you count the "naturally rugged good looks" that my chequered (but never dull) gene pool produced. From my first Displacement promo videos, I just had what a scouting agent from Virtual Tours termed "education presence". Not bad for a West Ngmatta boy.

A tour introducer's job would've kept me happy. But a full-scale backtracker? Top dollar and fibre-opt syndication? When it's this good, grab it before you wake up with a hell of a hangover. This, needless to say, was what I would describe as the First Good Thing to Happen to Me…

There is a clock in Sam Mitchell's kitchen which is always slow. Ten minutes slow to be exact. It's a plain, Roman numerated, battery operated, quartz movement, round kitchen clock and it chooses to be ten minutes slow. It sits up there on the wall, just to the left of the window over the sink, between the refrigerator and the still life print of bread loaves and daisies. It says tick tock in a muted voice as its red second hand clumps a steady course round its very ordinary face…

Yesterday I was shot, point blank range with what looked like an elephant gun. Blew a hole in me clean as a whistle  no blood, no pain, nothing  just stood there with a stupid look on my face, stunned. Then I passed out.

Captain SFB just went spare when he heard about this, called me up before him and asked me what the hell I'd been doing.

… "Sir, you are a curiosity. Your missive arrived stampless, and on my desk one morning. You know nothing of shorthand, indispensable for a journalist. And you are extraordinarily new-fangled, so much that I have the oddest suspicion about you."

"I know your George Eliot story by heart."

"But I haven't written it down yet!"

…DeGerch did a half somersault to watch Utopia Plain shrink into the darkness. She was too late. The frigate was already impossible to make out, barring where eclipsed stars betrayed her outline.

The voice in her head said, Cy, are you here yet? As always it spoke with no pain, no urgency, no fear.

"We're travelling, Roscoe. " She had to whisper when projecting to Roscoe Wiltchie, trapped deep in the wreck, in order to override the mutterings of the subcojnscious, the id and the ego, a circumstance she was thankful for. Thoughts were private like a diary, not to be read by anyone, not even a fellow Gartino like Wiltchie. She twisted herself right around, as the doctor was now doing, so that they headed in feet first. Mariner Valley was an ovoid, and the massive hold fringed with upflung hull made her appear like a savaged womb, bitten deep. But closer, as the hole swung big and dark beneath them, it looked more like a silently screaming mouth. They passed within, engulfed…