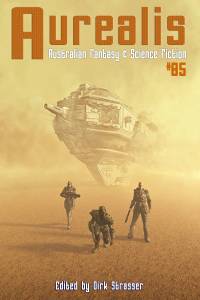 Everyone loves a good alien story, don’t they? Or is that just me? Some exotic planet with an alien species so strange we human interlopers completely misunderstand their motives and actions. Or where the aliens themselves act on a misinterpretation of our intentions with disastrous consequences. Unfortunately, we don’t see too many anymore in the Aurealis hidden gem pile. (I hate calling it a slush pile—it makes me want to be sluiced by a high pressure hose). Are these aliens becoming extinct?

I lamented at a recent Aurealis editors’ meeting that I remember reading some mind-blowing exotic planet/inscrutable alien stories years ago and that not only do we seem to see fewer stories around the theme these days, they didn’t seem as mind-blowing as they once were. Full marks to China Miéville for coming up with high-level inscrutable aliens a few years ago in Embassytown. The enigmatic Ariekei spoke a language that requires two words to be spoken at the one time. The problem for me was the Ariekei were so alien, I couldn’t warm to them. I guess that was the idea, but it didn’t quite bring back to me the wow-factor that I felt reading some of the older works.

I was beginning to wonder if it was me. Would I still enjoy the aliens from the past? I decided to put it to a test. The most exotic planet and inscrutable aliens I can remember from my early reading was Robert Silverberg’s Downward to the Earth. They don’t write ‘em like that anymore! Not one but two sentient species, with a strange mutual relationship that humans couldn’t figure out. Huge elephant-like nildoror and human-like but brutish sulidoror who were clearly subservient to the more intelligent species. And all of this on a planet dripping with exotica: jungles with parasitic fauna so far off the bizarre scale you need to come up with a new word to describe them, mysterious mist regions from which humans were banned travelling for unfathomable reasons, and an enigmatic protagonist who has returned to make up for the sins he committed during his first stay during the planet’s colonial past.

So I reread Downward to the Earth with a little trepidation. Was the meld of brooding beauty, mysterious motivations and grotesquerie still there? I more than half-expected I’d be disappointed and was a little surprised when I again felt the full brunt of its exotica. I was again immersed in the sheer alien-ness of the world and its two species. And the full force of the story had, if anything, even more impact. I was unaware of the Heart of Darkness allusions first time around, but on this reading they gave it more depth. For me the protagonist now seemed far more complex, his motives more tortured, the climax more profound. The world is the most vivid I’ve seen in science fiction. I can only hope that this Silverberg masterpiece finally does make it to the screen.

At least I know now it’s not that I’ve changed or that these stories have lost their power. The exotic aliens haven’t been pushed into extinction. I’m looking forward to seeing more spring to life from our hidden gem pile.

From The Dreamscribe by Peter Hickman

Peter Hickman is a Melbourne author and a member of SuperNova writers' group.
:

Now that she had decided to kill Baluth, Karlya felt liberated. As she walked the tree-lined path up to the expanse of his home, she experienced a tight sense of peace.

The mhyrren trees arched overhead. Fronds, heavy with pale pink flowers, dipped in the evening air, snowlike under the late summer moon. Karlya jumped to grasp one. The branch sprang back and the powdery balls broke apart, misting in the moonlight and coating her hand in dusty perfume. She remembered playing such a game as a young child and the ache of the vision halted her.

From The Events at Callan Park by Erol Engin

Erol Engin has been published in various journals including AntipodeanSF, Page Seventeen, etchings, and the anthology ‘13’ from Busybird Press.
:

A most interesting letter from Dr Freud:

I am writing because a neurotic in the care of an assistant suffers from a compulsive artistic malady and happens to be a countryman of yours. Though his treatment is by no means complete, the patient insists upon returning to Australia, which I feel may be beneficial. I have thus forwarded reports concerning his condition and request that you continue the investigations. Your belief in the therapeutic benefits of art, to say nothing of your own artistic abilities, should help to create an ideal rapport with the patient.

From Intimacy and the End of the World by Lachlan Walter

When we think of post-apocalyptic fiction, it’s fair to say that the first things that spring to mind aren’t sunshine and rainbows and lollipops, or smiling people sitting around a campfire singing Kumbaya, or peace and contentment and understanding.

Warren Nephron ran away to sea when only thirteen, but returned home ashamed when he failed to contract scurvy and instead developed an allergy to parrots.

From Life and Death in Small Things by Gillian Polack

Gillian Polack is a writer, editor and historian who has had four novels published and teaches writing at the ANU.
:

While Nevil Shute’s On the Beach is about the end of life on Earth, its small details create the tragedy.