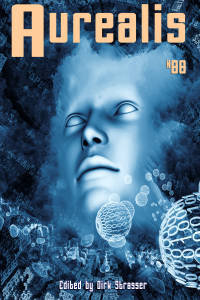 A wicked little tale of frenetic tweeting, an exploration of what might go wrong with humans trying to understand aliens, and a tense near-future thriller that proves big business really does get away with murder…

You can’t control a work of fiction after it’s been published. Once it has found a readership, it belongs to the readers as much as it belongs to the writer. I was made profoundly aware of this some time ago in relation to my own writing when I came across an online German article Lucid Dreaming that featured an interview with a musician called Till Oberbossel. Here’s my translation of the last question and response from the interview.

You’re a widely read fantasy nerd and have read many series in English. So, apart from the well-known ones such as Lord of the Rings, Game of Thrones, etc, which do you think are good and why?

I enjoy reading and love fantasy, although I also read across many other areas. As far as fantasy is concerned, Tolkien’s works and, of course, the Chronicles of Prydain are my favourites. It’s hard coming up with reasons for my preferences. If a novel or series grips me I don’t usually try to work out why. If I feel comfortable in the fantasy world, I stay there like a while. Apart from the ones I’ve mentioned, the others I’ve really enjoyed are: the Conan stories of Robert E Howard, the Books of Ascension trilogy by Dirk Strasser (by the way, there will be a song on the next Elvenpath album based on this), the Death Gate Cycle series by Margaret Weis and Tracy Hickman, and not least the Discworld novels by Terry Pratchett. I love them dearly. Thanks for the interview, for your interest in Lucid Dreaming and allowing me to present my music here… Support the Underground and stay Metal!

Whoa! I did a double take. The words ‘there will be a song on the next Elvenpath album based on this’ really floored me. A song based on my trilogy? Wow! Something I had written had actually inspired a musician to write a song. I knew the Books of Ascension had been published in German in 2001, but for the series to percolate in someone’s mind all this time and to emerge in musical form is mind-boggling.

I contacted Till via his band’s website to wish him luck and saying I would love to hear the song. He seemed almost as surprised to hear from me as I was to see my trilogy mentioned in his interview. He sent me the lyrics and a copy of the Elvenpath CD Pieces of Fate when it was released in 2015.

So, what sort of music is inspired by fantasy fiction? The only music I was aware of was the acoustic, lyrical, floating-through-the-ether sort of melodies. This band’s elvenpath is completely different. Their music is power metal. So for those of you who aren’t familiar with the term (as I wasn’t when I first came across it—AC/DC is about as metal as I’ve ever been): power metal is type of heavy metal with an elevating anthem-like sound. Like the epic fantasies that inspires it, power metal strives for an epic sound. If Elevenpath are typical, then the vocalists can sing in a high register and have a wide range, and the guitarists have a high level of technical proficiency.

And above all their lyrics are in synch with high fantasy sensibility. They are both evocative and powerful. Here’s an example from Mountain of Sorrows, the song based on the Books of Ascension:

When night conquers the daylight and winter calls our names
Our roads will differ, will fate be the same

Storms cross my pathways, pillars of stone
And many a strange sight I see
Puppets and demons, warriors and masks
They reveal the dark side to me

Cloisters of silence, houses of life
The mountain is standing, who knows what’s inside
Amazone warriors attack in the night
The hour has come when steel will shine bright

The lyrics are potent and poetic. None of these words are mine, yet they have grasped the essence my novels. There’s no doubt Till Oberbossel gets fantasy. And to write this sort of stuff in what isn’t his first language takes impressive skill.

If you had told me all those years ago when I started to write Zenith—The First Book of Ascension, that a power metal band from Frankfurt, Germany, would be opening their new album with a song based on my work, I would have bet my house on it not happening. You just can’t tell what sort of life your fiction will lead once you’ve given birth to it.

If you like epic fantasy, have a listen to Elvenpath’s Mountain of Sorrows, Battlefield of Heaven and Queen Millennia from the Pieces of Fate album. And remember. Stay Metal!

From #WhatIsHendersonsCurse by Melanie Rees

Melanie Rees is an environmental consultant who spends much of her time playing in wetlands. Her work has appeared in markets such ASIM, Apex, Cosmos and Daily Science Fiction.
:

@BrookeysCig @GlamJez Locked in the locker til everyone’s left school. Scared, claustrophobic…suffocating. #WhatIsHendersonsCurse
“Is this girl for real?” Brooke clasped her head in hands and sighed.
“I don’t know, maybe she’s just a little weird.”
“A little!” Brooke typed as she spoke.
@ImJustAGirl16 Are you tweeting from the asylum, sister? There are no lockers here.
@BrookeysCig Lockers, cupboards…sheds. All the same.
A scream resonated from outside.

From The Planetary Survey by Tom Dullemond

Tom Dullemond writes primarily short fiction across all genres, including literary fiction and the occasional poem. He co-authored ‘The Machine Who Was Also a Boy’ and is the co-creator of Literarium, an online writing management portal.
:

I tried to do some research at a bar once and asked a xeno what her poison was. Turns out my Agency language implants were undergoing ‘system maintenance’ and I ended up in a half hour discussion on socio-ethical protocols in relation to discharging venom sacs at hierarchical superiors. And I couldn’t get away because she was waving her stinger at me. “Idioms ain’t what they used to be,” my colleagues told me after, laughing.

From Wired by Jessi Hammond

Jessi Hammond writes a range of speculative fiction, including the Kingdom of Kaikara series of short stories. She also writes middle grade and YA fiction under a different name.
:

Ashlyn Gates’s first reaction when she saw what was left of Connor Moore was shock, anger, and a deep, stomach-clenching pity.

From The Time Traveller Smiled ... by Jeff Harris

Jeff Harris is a science fiction writer, editor, and critic who has published over two dozen short stories and articles plus the novel Shadowed Magic with Chris Simmons. He prefers travelling by TARDIS.
:

Basically if a chrononaut moves only through time and remains fixed spatially, then because planet Earth moves through space when the chrononaut arrives, the Earth won’t be there and our chrononaut will die in the vacuum of space.

From Why Do People Like Horror Movies? by Claire Fitzpatrick

Claire Fitzpatrick is an author, poet, journalist, and performance artist. Her debut novel, Vinyl, about Australian nurses and political protestors in the Vietnam War, is in the editing stages of publication.
:

It’s our first date. He’s treated me to a movie in an old run-down theatre with velvet mothball drapes, and stained carpet. He pays for my upsized frozen Coke, walks behind me with his hand on the small of my back, and strokes the top of my thumb as the credits begin to roll. Then I look up at the screen and frown. I wasn’t expecting the opening scene to the ‘surprise movie’ to show a scantily clad woman with breast implants being impaled by a javelin-wielding, hockey-mask wearing psycho killer.

From Secret History of Australia: Canterbury Jones by Stephen Higgins

Stephen Higgins has his own secret history.
:

Considered by many to be the finest sculptor Australia has produced, Canterbury Jones was born and raised in Perth. His early life produced little evidence of any artistic talent and this fact remained a constant throughout his life.