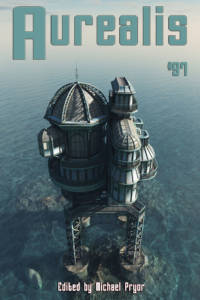 Aurealis #97 features the must read ‘The Year Ahead in Australian SF/Fantasy Publishing’, Catherine Moller’s unsettling ‘Hot Blood and Iron Teeth’, Melanie Rees’ genre-bending ‘Elementability’ and Jamie Brindle’s quirky ‘The New Life’. Our non-fiction is stellar, with Gillian Polack’s exploration of the work and impact of Cherry Wilder, while Daniel Thompson gets our science pulse racing with his analysis of Relativistic Projectiles. Of course, we also have reviews, the cult success of Secret Histories, and some of the best Fantasy/SF illustrations you’ll ever see. Aurealis – too good to miss.

Fantasy and Science Fiction are the best.

Also, Fantasy and Science Fiction writers are the best because they get to deal with profundities.

Fantasy and SF are the Literature of the Profound. Writers who spend their times documenting the trials of everyday life don’t have the opportunity to grapple with the philosophical questions that have intrigued us all since the dawn of time. Who are we? What are we? Where did we come from? What makes us what we are? These fundamentals about our existence are meat and drink to Fantasy and SF writers as we imagine other worlds where Normal Rules Do Not Apply. Situations like this give us ample room to explore what it means to be human or the basis of moral choice or place of aesthetics in our society.

Time to pluck an example. We can’t imagine a mainstream novelist producing a work that examines the Sapir-Whorf Hypothesis of the interaction between language, culture and cognitive abilities, but that’s just what Jack Vance did in his 1958 novel The Languages of Pao by positing ruthless overlords who created a global experiment to test how imposition of languages could shape various societies into ultimate warriors, consummate merchants or brilliant scientists. Not only did Vance explore this fascinating possibility, but he embedded this speculation in a rattling good yarn.

One example, decidedly non-random, but the point is that Fantasy and Science Fiction don’t just allow exploring such matters, they actually enable this exploration. This is because one of the strengths of these related genres is their limitlessness. Nothing is out of bounds for a Fantasy or SF writer to speculate about. In fact, any hint of boundaries prompts Fantasy and SF writers to wonder what lies on the other side. They imagine. They create.

Everything is grist for the mill, and that’s another reason Fantasy and Science Fiction writers are the best.

It helps, of course, that Fantasy and SF writers have the best readers in the world. That isn’t blatant sucking-up, either, even though it might sound like it. Whenever Fantasy or SF readers open a new book, they know that that they have to be on their toes, that they have to do some work. In this book, things will be different—and they have to read carefully to understand the world, the society, the magic system or the political milieu that the writer has created. Fantasy and SF readers are ready for this, and they rise to the challenge.

This of course, is the reason why one hears, so often, from non-genre readers who say about Fantasy and Science Fiction: ‘I couldn’t get into this.’ This is because they’ve become weak and flabby, unable to work even a little bit hard. Their reading antenna have been dulled by years of reading mainstream novels where they just have to look at character, while taking the setting for granted—and not being worried about having to keep up with anything as grubby as an actual plot.

Fantasy and Science Fiction are indisputably the best.

From Hot Blood and Iron Teeth by Catherine Moller

Catherine Moller is a Brisbane-based editor and writer of speculative fiction. She's obsessed with landscape in speculative fiction, and has strong opinions about fictional maps; she wrote her MA thesis on representations of diversity in fantasy cartography. She also holds a degree in writing and linguistics, and has travelled across five continents. She currently writes a column on grammar for WQ
:

Unscheduled track repairs waylaid them at a station they had never seen before. A little country station with a portico and no walls, and grey-green bushland stretched out for miles and miles around it.

From Elementability by Melanie Rees

Melanie Rees is an environmental consultant who spends much of her time playing in wetlands. She has also held jobs playing in dirt, playing with fish, and playing in treetops. When she is not up a tree or stuck in the mud, she writes speculative fiction. She lives online at flexirees.wordpress.com and on Twitter @FlexiRees.
:

Meeka’s first words should have filled me with awe, but when my gorgeous little girl pronounced ‘argentum’ there was just one emotion: fear.

It was a gurgled sound, but the word was unmistakable, and if we did have doubts, the blade of grass in the bio-dome turning to silver confirmed our suspicions.

From The New Life by Jamie Brindle

Jamie Brindle has been writing stories for as long as he can remember. Sometimes they are even published. He is definitely from the UK, but his first job was selling boomerangs at Covent Garden Market in London, so he is very happy to have a story in an Australian magazine. He was home educated and lived in a hedge maze until he was 18. For more information, visit www.jamiebrindle.com.
:

‘Look,’ said Rosewater, trying to sound as reasonable as possible, ‘it’s just junk. You really don’t need any of it where you’re going.’

The Rich Soul glared at him balefully, and didn’t budge so much as an inch.

Although Aurealis has global reach, a key aim of the magazine has always been to increase the profile of Australian speculative fiction. One of the ways in which we do this is to showcase new and upcoming titles from Australian authors and publishers—so what better way to kick off the new year than with a list of 2017 releases?

Gillian Polack is a writer, editor and historian. She had four novels currently published, and her second novel Ms Cellophane (Momentum) was shortlisted for a Ditmar. She teaches writing at the ANU, at various Writers’ Centres and to members of other professional writers’ organisations. www.gillianpolack.com Facebook: Gillian Polack Twitter: gillianpolack
:

Cherry Wilder was a New Zealander and lived in Australia then in Germany. Wilder appeared in New Writings in SF (V. 24–1974) and was the first woman to do so. She was listed as Australian. Moreover, we know that fans thought of her as Australian, because she won a Ditmar, which is a fan-voted award. Her novels were released internationally in mass market paperback. So many Australian authors have a history appearing in of local and small press only, even now, and Wilder was given mass market paperbacks in the 1970s and 1980s. She is taken so seriously by science fiction critics that when a series of pamphlets on major writers was put out in the late 1990s by Nimrod Publications, she rated one of her own. Written by Yvonne Rousseau ‘Minmers marooned and Planet of the marsupials: the science fiction of Chery Wilder’ is an argument that Wilder’s straight science fiction novels deserve to be considered classics. In this Australian-produced critical series, the only other Australian writers given volumes are Damien Broderick and Terry Dowling.

Daniel Thompson is a uni student living in Melbourne. Currently doing a law degree, he is secretly hoping to avoid the perils of an actual career by becoming a writer and travelling the world. He is writing a science fiction trilogy and hopes someone else will read it someday.
:

Of all the terrifying (and yet still realistic) weapons dreamt up in science fiction, perhaps none are more devastating than the concept of relativistic bombardment. Einstein taught us that the closer you accelerate an object to light speed, the greater its resultant mass and the subsequent kinetic energy. As you approach light speed, this figure approaches infinity.