View Cart “Classic Australian SF 1: The Crowned Skull” has been added to your cart. 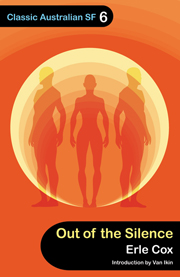 Classic Australian SF 6: Out of the Silence

by Erle Cox (with an Introduction by Van Ikin)

An advanced civilisation from the impossibly distant past is about to be resurrected in rural Australia.  What dark secrets does it hold?  Is it possible for a man to deny the requests of the world’s most beautiful and intelligent woman?  To fight a relentless and appealing logic no matter how horrific the consequences?

It’s rare that a novel captures a country’s soul.  How is it possible that a novel written almost a hundred years ago can speak to us so deeply of things that disturb and torment Australians even now? Out of the Silence is the most perplexing of novels, where during the course of the story your expectations and assumptions are turned 180 degrees.  You must read this one to the very end.  Once the climax hits, it will never leave you.

There came a rustle and a suppressed whispering wave. It was unreal, and yet terribly real. Suddenly he sat erect, quivering in spite of himself. It took every scrap of resolution he possessed to restrain his movements.

From a great distance came the sound of voices chanting. The sound was so faint that at first he could only catch it in fragments. Gradually it grew in strength — nearer and nearer — a triumphal song from some great processional choir. He listened, lost in awe and wonder. Never had he heard anything more entrancingly beautiful as the magnificent torrent of sound that rose and swelled through the gallery. It filled the great building, as it filled his whole soul, to overflowing. Every earthly memory seemed swept from his mind. He sat motionless, intoxicated with the glory that thrilled him through and through. How long it lasted he could not tell. In regular cadence the mighty sound rose and then died away to silence as it had come.

He realised now, without the slightest apprehension, that the lights of the gallery had slowly faded with the sound, leaving only a dim subdued glow. Then it came. One single perfect voice that broke the throbbing stillness in a wonder of glorious harmony. It told of life and love, and of death and war. It told of love splendid and passionate, of deeds that fired the blood to frenzy, and through it all was a note of terrible overwhelming sadness. The glow had faded completely. Dundas sat in utter darkness. The tears he had tried at first to restrain came to his eyes unchecked. It seemed as if the hands of the invisible singer had swept the chords of his very heart.