Equinox: The Second Book of Ascension 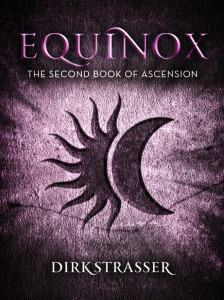 
The fate of the Mountain hangs in balance at the time of Equinox, and even the Keep can no longer remain untouched. The Maelir are desperate to defend it, the Faemir to demolish it, the windriders to claim it. But unknown to them all, a dark force has already emerged from the chaos to seize power.

As Atreu and Verlinden strive to decipher the power of the Talisman that has defined Atreu’s Ascent, Teyth and Valkyra are locked in a desperate battle that neither of them can win. At a time when darkness and light are in perfect equilibrium, when Maelir and Faemir must find a way to break the deadlock and avoid annihilation, the world’s fate lies in the Book of Ascension.

As darkness consumed the Mountain side, they came again: grotesque, misshapen, eyes blood-red and teeth bared. Rhea and those Faemir who could still stand had their swords drawn and stood tensed in battle formation.

This time the grale didn’t charge, they simply kept walking on their twisted legs with the same awkward, shuffling gait. They came closer with every step, as if they instinctively knew they would finish the Faemir this time.

Through the still night air, the rancid smell of burning dung reached Rhea’s nostrils. She watched the hundreds of pairs of red pinpricks as they approached. They’ve learnt from our previous night’s encounters, she thought. They are in no hurry. They know we won’t attack them or try to run away, and that we’ll just wait for their onslaught. Well, at least this time there was a surprise in store for the grale.

Rhea glanced across at the faces around her. The warriors were all resolutely focused on the approaching beasts as if mesmerised by them. Ahrai stood, sword in hand, to her right.

Rhea waited, counting her breaths, feeling the beast’s odour enter her body. Although she didn’t look around, she pictured the injured Faemir lying behind the thin wall of warriors that she and the others formed. And behind them was the white vertical slope of the cliff face, the one advantage they had.

Then she gave the command.

The battle wail filled the air as the Faemir warriors fanned out in a wide arc and hit the grale with a wild fury, hacking and slashing at them with deft yet powerful strokes. At first the beasts were in total confusion, bellowing, roaring, unable to decide which way to run. One after another, they were stunned as blades hit their vital organs. They froze for a moment, then tottered and fell in death shudders.

But soon the tide turned. The grale kept coming, ignoring their fallen brethren and bearing down on the Faemir warriors. Once the element of surprise had been lost, the battle became a grim one. Each Faemir was now surrounded by beasts intent on tearing into human flesh with sharp teeth and ravenous mouths.

‘Formation,’ cried Rhea, and the warriors all turned, charged through a maze of grale bodies and resumed their initial positions with their backs to the cliff wall.

There was an awkward shuffling amongst the grale for a moment, as if they were unsure where their prey had gone, and then they focused on the re-formed battle cluster in front of them and they charged at it.

Screams tore the air as Faemir were gored, but the warriors stood their ground, tightening their formation each time one of their number fell. And the grale died in far greater numbers, until the bodies of their dead and half-dead blocked the way of the others. Fewer and fewer came through the obstacles until, finally, the attack ceased.