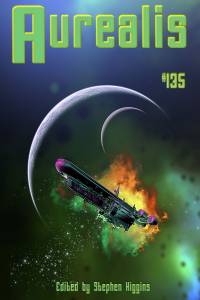 The new issue of Aurealis is packed with quality reading. New fiction from Fiona Bell, Michael Kellichner and Keith Oakden-Rayner, as well as tons of non fiction including another intallment of Darren Nash’s recollections of his time with Gollancz publishing. Plus the penultimate installment of Dirk Strasser’s impressive novel “Conquist’.

From the Cloud
Stephen Higgins

This may seem odd for an editor of a science-fiction magazine to admit but I’m going through one of those phases where I’m finding it hard to find something to read. I don’t mean short fiction. I get more than my fair share of short fiction here at Aurealis, but it’s hard to find new longer works to get stuck into. I love short SF. Always have. Like many others it was my entry point into science fiction in general. But I love getting lost in the world of a book. I’ve found myself starting many novels but just not getting into them sufficiently to keep going.
Another admission: I read almost exclusively on my iPad now. I know, I know. Heresy. And hey, if you’d told me years ago that I would prefer an e-reader to a ‘proper’ book I would have laughed in your face (with a mask on, of course) and sent you on your way. I love books. I previously had a study with three of the four walls filled with books. I was never going to read them all.
I’m hopeless at maths, but when you get to my age the equation gets easier to understand—X amount of years divided by X amount of books. It wasn’t looking good. So I got rid of them. I gave many to my school library, gave many to friends and family and sold a few boxes to a shop.
Now I get samples of books to try, which is a great idea. You get a sense of whether you’re going to like the novel or not. I’ve probably gone on to purchase about half of the books I first sample. But lately, not much is appealing. I read a while ago that your Sense of Wonder can get tired out. I mean, let’s face it, in all my years of reading SF and fantasy, I’ve come across an incredible number of amazing plots, scenarios, worlds, individuals, societies and aliens. So it gets harder and harder to actually be amazed. I think the last time I was genuinely blown away by a book was when I read The Scar by China Miéville. I heartily recommend it.
Anyway, I’m finding it tricky to find the next Scar. People recommend books. I trust the people at Aurealis and their taste in many things and I do follow up some of their recommendations. But lately, no luck. I don’t actually believe that it’s the fault of writers. ‘It’s not you, it’s me.’
I’m hoping that it’s a passing phase. I’m in big trouble if it isn’t. The same thing is happening to me in music. And film. And work isn’t exactly setting me on fire enthusiasm-wise at present. God, I hope it isn’t a case of ‘Being tired of London’ because I can assure you I’m not tired of life. Anyway, recommendations for good reading are eagerly awaited. And I can’t guide your choices by offering the favourite authors since I have too many to list. Oh, alright then—Philip K Dick, Terry Dowling, my old china, China Miéville—and anything quirky is fine by me, so these are a few to help you.

From Smile by Keith Oakden-Rayner

Keith Oakden-Rayner is a writer from Melbourne with an equal interest in the past and the future. His work has appeared in Spook Magazine, Cookbook North/South, Non-Precious, and online. He is currently working on a science-fiction novel, started during a writing residency in regional Italy.
:

The only thing that mattered about a face was not wearing it first. The top crews worked in threes, swapped the face between them for days, switching in public restrooms where there were no cameras. One went in, swapped with two, and then they were out. A few hours later, two swapped with three, then three with one, and a week later the web was so complex that even the federal servers had lost you.

From Mary, Mary by Fiona Bell

Fiona Bell is writer and teacher based in Cairns, Queensland. She writes short stories in various genres, but is particularly fond of those set in dystopian worlds. Fiona also writes YA fiction and in 2018 University of Queensland Press published her novel Waterhole, which is a mystery set in the far north. She is currently working on another YA novel.
:

You are paid, though it is a pittance. You are fed, though you prepare the food. You are sheltered, though they provide the roof. You’re needed, but not wanted. Mary is the name you go by. And her, the other girl, that is her name too.
Mary is the name that summons you to clean up vomit or tend to a crying baby. You don’t care for your name but then again you don’t care for much when you’re a Mary; at least you’re not supposed to. The real woman of the house, and the man, they care about things like entertaining on a Friday night and enjoying holidays in the finest powder snow and having the child out of the way. Marys are there to help with this.

From The Sin Eater by Michael Kellichner

Michael Kellichner is a writer and poet originally from Pennsylvania, USA, but has been calling South Korea his home for quite a while. While not teaching ESL to young children, he’s kept busy by his daughter and trying to find time to write. Other short fiction of his has appeared in Black Denim Lit, Trigger Warnings: Short Fiction with Pictures, and Three Crows Magazine.
:

Even though it was the point, the bread was too salty. It sucked the moisture from my mouth, made my jaws ache to keep chewing. But I did. That was my job. All around, the gathered watched my motionless back in the flickering candlelight. The anticipation in the air was palpable, the unspoken desire for me to hurry radiating from everyone except the dead man lying on the floor in front of me. Without looking, I knew they were balanced on the precarious tension of wanting to lean forward to implore my haste and wanting to lean away to not be so near me and death. Fearing that I would take too long, but also fearing their speaking would stop my chewing. Fearing I might look at them.

From CONQUIST Part 9: In the Halls of Demons by Dirk Strasser

Dirk Strasser has co-edited/co-published Australia’s premiere speculative fiction magazine Aurealis for 30 years and founded the Aurealis Awards. His screenplay of Conquist was a Finalist in the 2020 Script Summit and 2020 Creative World Awards.
:

I dreamt of the condor again last night. On awakening I was beset by a question that now torments my soul.

If no-one saw it soar across the vast heavens.

If no-one saw it stretch its colossal wings to catch the up-draughts.

If no-one saw it dance with the mountain winds.

And if no-one saw it disappear.