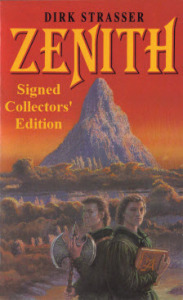 an ascent so vital it determines the fate of the world

a summit so precious it holds the key to the divine

The world of the great Mountain is unstable. Giant pillars erupt from the surface and yawning chasms form unpredictably underfoot. Since the Maelir first stood on its slopes in the distant past, they have sought to still its anger and control its power. Each year, twin brothers are chosen to make a perilous journey to the summit. If they survive they will be witness to Zenith, and the secrets and power will be revealed to them.

Atreu and his brother Teyth have been chosen to ascend, but this time unknown forces who have long craved the power of Zenith will stop at nothing to make it their own… even if it means destroying the very thing that sustains all life – the Mountain itself.