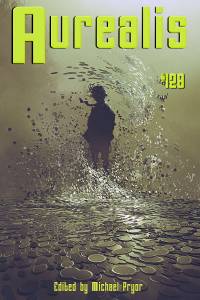 Aurealis #128 has the dreamlike Head Below Water from Azlïn Auckburally, the alarming Selfie from Kat Clay and the punchy Tezcatlipoca from Patrick Hurley—plus top quality non-fiction from Gillian Polack, Matthew Harrison and Tim Hawken.

And, of course, we have our sprightly Reviews department and stunning artwork.

Aurealis – you ought to be congratulated (wait until they read it!).

On the 29th of November 2018 C S Lewis would have been one hundred years old. The much-loved fantasist was a thoughtful writer, one who looked closely at the craft. Below is some shrewd advice that is still as fresh and helpful as it was when he wrote it in 1956. Writers out there, pay attention!

Azlïn Auckburally was raised in Alice Springs, and spends most of her time daydreaming. To her chagrin not all of those daydreams make it down on paper. ‘Head Below Water’ is her second published story.
:

Someone killed the Sun yesterday. I know because the light was too thin when it rose, unable to illuminate anything in its full beauty. What I can see is wrong, but I can’t remember what it should be like. I remember other things just fine though, so Memory must be alright, sheltered wherever he ran after the war.

From Selfie by Kat Clay

Kat Clay is a crime and horror author from Melbourne, Australia. Her short story ‘Lady Loveday Investigates’ won three prizes at the 2018 Scarlet Stiletto Awards, including the Kerry Greenwood Prize for Best Malice Domestic. Her work has been nominated for the Aurealis, Ditmar and Australian Shadows awards. She is the author of novella Double Exposure.
:

The photo in the mirror won Amber the trip.

Hashtagged #beyourself, she’d posted about her body struggles. Cause it’s hard being an influencer, keeping up with the latest trends, on top of your social posts and your figure. Her body reflected in the mirror, light streaming through the curtains, the hint of the white beach and aquamarine water behind. Her naked torso, twisted waist, hi-cut underwear, her body reaching as if for something in the mirror. This is me, no makeup, fresh out of bed.

From Tezcatlipoca by Patrick Hurley

Patrick Hurley has had fiction published in Galaxy’s Edge, Cosmic Roots & Eldritch Shores, and Abyss & Apex, the book anthologies Portals, Battling In All Her Finery, and Murder & Mayhem, and the podcasts The Overcast, and The Drabblecast. Patrick lives in Seattle USA and is a member of SFWA and the Dreamcrashers.
:

The kid didn’t tap the old man on the shoulder because, in prison, that was a good way to get a shiv in the gut. Instead, from a respectful distance, he cautiously called out the old man’s name.

From CONQUIST Part 2: Under a Crimson Sky by Dirk Strasser

Cristóbal battled with his doubts even as he made furious love to Sarpay, pushing into her as if somehow it would give him the answers he sought.

From An Introduction to Australian Timeslip Novels by Gillian Polack

Gillian Polack is a writer, editor and historian. Her research is currently about how narratives work and how writers create them, including how culture is encoded and how history is used in fiction. URL: www.gillianpolack.com. Facebook: Gillian Polack. Twitter: gillianpolack. Website: bookviewcafe.com/bookstore/bvc-author/gillian-polack.
:

Timeslip may be fashionable or it may be unfashionable, but it seldom disappears entirely from our novels and short stories. I don’t want to delve into its early days here, or the way it takes on the needs of a region when it’s written in a region. In such a brief article, I can’t even give you a thorough exploration of just the Australian timeslip novels. There are a lot of them. Timeslip is important to stories told in English.

From AI and the Totalitarian Future by Matthew Harrison

Matthew Harrison lives in Hong Kong, and whether because of that or some other reason entirely his writing has veered from literary to his boyhood passion, science fiction. He has published numerous short pieces and is building up to longer stuff as he learns more about the universe. Matthew is married with two children. www.matthewharrison.hk
:

From H G Wells’ 1895 novel The Time Machine onwards, science fiction’s visions of the future have often been authoritarian. Wells extrapolates from the class system of nineteenth century Britain to a future where the underclass has evolved into a separate species, the Morlocks, who labour for the privileged and effete Eloi and, in a nightmarish twist, eat them.

From What Makes Good Horror? by Tim Hawken

Tim Hawken is an Australian spec fiction writer best known for The Hellbound Trilogy. He won the Australasian Horror Writers Association's Best Flash Fiction Story in 2013 for his werewolf piece Moonlight Sonata. You can find out more about his work and get a free ebook copy of the first installment in the Hellbound Trilogy over at timhawken.com
:

I used to think horror was like art—you knew it when you saw it. Helping to judge the Australian Shadow Awards last year changed that. While the other panel members and I were provided with some existing criteria to judge by, we nevertheless found ourselves debating whether some entries were ‘horror enough’ to be considered for the award. Were some simply fantasy fiction with dark elements, or YA with a little bit of bite? This was even before we’d discussed whether the books were actually any good or not. I’m confident we got the short list and eventual winner right in the end, since Kaaron Warren’s Tide of Stone (2018) also won the Aurealis award for best horror novel.