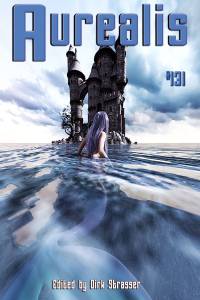 Don’t miss the Aurealis #131 experience! Start with Joshua J Newnes’ fable-like ‘Secondhand Hearts’; move to J Ashley-Smith’s immersive ‘In Memoriam’; take in the time-travel of Davide Mana’s ‘A Piece of the Action’; pass through the portal with the conquistadors of Dirk Strasser’s Conquist Part 5: ‘The Curse of Honour’; and then take the time to enjoy our smorgasbord of articles and reviews.

Do you remember when ‘going viral’ was likely to be a cause for celebration? Only a few short months ago it was the ultimate measure of success in the world. It was the exponential shortcut to fame, fortune and influence. Now it feels like another world.

The recent publication of Adam Kucharski’s book The Rules of Contagion: Why Things Spread – and Why They Stop, seems to be perfectly timed to go viral. However, it doesn’t mention COVID-19, so there appears to be an element of chance in the timing (much like in viral spreads themselves).

Kucharski, an associate professor at the London School of Hygiene and Tropical Medicine, points out that the mathematical principles of contagion can be applied to everything from folk stories, ideas and innovation to obesity, loneliness and yawning. It turns out that the virus is the underlying concept behind much of the phenomena around us. It explains how fish populations vary as well as how financial markets act. It illuminates knife crime and smoking rates. It even has something to say about how itches work.

It all comes down to the reproduction number R which is the average number of infections passed on by one infectious person. For something to ‘go viral’, R needs to be greater than 1. While epidemiologists’ life work is to minimise R, there are people in other fields who strive to maximise it, such as marketers striving for brand awareness, and those web denizens wanting to spread fake news.

While Aurealis hasn’t exactly ‘gone viral’ during the pandemic, we must be experiencing an R value greater than 1 because there has been a noticeable increase in our subscriptions. Welcome to all the new subscribers who have joined us from March! By the way, I’ve decided I won’t be mentioning COVID-19 again in my editorials. I think we’ve all heard enough, haven’t we?

Time to escape the virus. Enjoy the issue.

Joshua J Newnes has wanted to write stories about people and worlds and strange and wonderful things for as long as he can remember. ‘Secondhand Hearts’ is his first published story and he couldn’t be more ecstatic about it. He loves all things fantasy, science fiction and comics. Joshua lives with his lovely wife in Adelaide, Australia.
:

Arun looked at his watch again. He had been sitting at his verandah for over an hour. He stroked his chest gently, wishing the pain would go away. It didn’t. The pain never went away.

From In Memoriam by J Ashley-Smith

J Ashley-Smith is a British–Australian writer of dark speculative fiction. His short stories have twice won national competitions and been shortlisted five times for Aurealis Awards, winning both Best Horror (Old Growth, 2017) and Best Fantasy (The Further Shore, 2018).
A novelette, The Attic Tragedy, will be released by Meerkat Press in June 2020.
:

All that is left are memories.

Like that time on the shingle beach at Aldeburgh. The ocean grey as slate, crests ruffled like white frosting. The thump of waves and rasp of small stones and, everywhere, the seashell roar like an endless breath. No horizon where the sky meets the sea, only the blur of cloud banks gathering. A tang in the air, of salt and electric tension, of the storm that will hit that afternoon.

From A Piece of the Action by Davide Mana

Born and raised in Turin (Italy), Davide Mana used to be a palaeontologist and an environmental data analyst, but now he’s paying his bills as a writer of SF and fantasy. His stories, often dealing with history and pre-history, have been published in various anthologies, both in Italian and English, and on the pages of Occult Detective Quarterly and DreamForge Magazine.
:

The place looked like any other street in any other low-rent neighborhood after the Crisis hit. Boarded up windows and graffiti on the walls, the grass growing tall and yellowish in once nicely kept lawns. A single car, parked in front of a closed garage attached to a white box house. The upper story windows had been smashed. By whom, I wondered. The car, an old station wagon the color of a bathroom closet, had four flat tires.

From CONQUIST Part 5: The Curse of Honour by Dirk Strasser

The duendes continued to circle like condors above the carnage long after the meagre remnants of the ñakaq army had been imprisoned and the surviving soldiers had collected conquistador bodies. As the Spaniards buried their four hundred dead, Padre Núñez performed the final rites for those men who would not survive their injuries. In the eerie after-battle stillness, Cristóbal stood over his cousin’s grave and wept. A hand fell on his shoulder. Héctor’s.

Lynne Lumsden Green is enjoying the ageing process, contrary to all expectations. She writes both fiction and non-fiction, and owns more books than bookshelves. She has stories and articles published by Queensland Writing magazine, DailySF, AntipodeanSF, and in over a dozen anthologies of fiction.
:

I like shiny things, ask anyone in my family. First, it was science fiction, discovered as a child by watching Doctor Who (1963–) and by reading I, Robot (1950) by Isaac Asimov.

Claire Fitzpatrick is an artist and award-winning author of speculative fiction and non-fiction. She won the 2017 Rocky Wood Award for Non-Fiction and Criticism. Called ‘Australia’s Queen of Body Horror’ and ‘Australia’s Body Horror Specialist’, she enjoys writing about anatomy and the darker side of humanity. Her collection Metamorphosis from IFWG Publishing was hailed as ‘simply heroic’.
:

From The Trouble with Terminators by Daniel Thompson

Daniel Thompson is a uni student living in Melbourne. Currently doing a law degree, he’s secretly hoping to avoid the perils of an actual career by becoming a writer and travelling the world. He is writing a science-fiction trilogy and hopes someone else will read it someday.
:

Terrifying, unstoppable, insanely strong, covert, cunning and unpersuadable—there are many words with which we could describe our coming silicon servants.