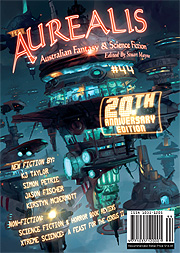 This is an exciting issue for me. This issue marks twenty years of continuous publishing of Aurealis magazine. It is also the first I have been able to present with more than one science fiction story. Finally it is an issue with more Australian focus than others I have edited. All these points make me proud of the development of the magazine over the past four years that I have been at the helm.

The quality of submissions has increased steadily in that time. I have attempted to encourage people whose stories I have rejected to develop and better their skills with honest (and hopefully positive) criticism. It has been with this strategy that I have nailed my colours, that people would come back to the magazine and want to read quality Australian fantasy and science fiction. After all, a magazine only survives when enough people want to buy it and read its contents.

This strategy has worked. As of writing (May 2010) as many people subscribe to Aurealis, and more people read, via library subscriptions, the magazine than when my friend and former editor Keith Stevenson left the editorship. It has been a hard slog to return Aurealis to its former heights. I am inordinately proud that I have succeeded in this, my prime objective when under taking the job. I whole-heartedly wish that the magazine continues for another twenty years.

I receive more and more submissions from writers who have had their fiction accepted in Australian literary journals. I take this as a welcome blurring of the lines between genre and literary writing.

In this issue you will see speculative iction of a literary nature, you will find a number of stories that are purely science iction. I am glad to say that one of the magazine’s subscribers finds his first (science) fiction piece published in this issue. And you will find one story that is unashamedly epic fantasy. K J Taylor has burst onto the epic fantasy scene with her fantasies that fuse the vivid action of heroic fantasy, with the
honest emotional characters of the sub-genre.