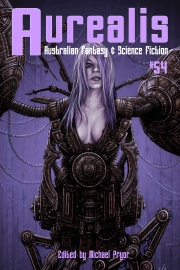 Aurealis is the Australian magazine of fantasy, science fiction and horror. Aurealis #54 is edited by Michael Pryor. This issue includes stories by Karen Maric and Jack Nicholls, plus an extensive interview with Fantasy doyenne Trudi Canavan. In addition, Aurealis #54 has news and reviews highlighting the best new writing in speculative fiction.

Anvil of the Sun – Karen Maric

The only possible subject for this issue of Aurealis is Neil Armstrong.

The link between NASA and Science Fiction goes back a long way, with the decision to name the Mars rover Curiosity’s landing site ‘Bradbury Landing’ only the latest in a well-established relationship. Robert Heinlein received NASA's Distinguished Public Service Medal. David Brin has been a NASA consultant. Many science fiction authors have been NASA launch day guests.

I have no idea if Neil Armstrong read science fiction, but I do know that stood for something that has inspired generations of science fiction readers. The sheer audaciousness of the whole Apollo mission captures some of the sense of wonder that many cite as a vital part of the appeal of science fiction. The hardware and the technology were fun, of course, but the courage and human spirit shown in leaving this precious globe and daring to reach for the stars are a distillation of some of the fines of science fiction.

And surely the stunning images of the moon landing were enough to make the heart of any true SF buff beat faster.

‘Neil Armstrong was the first person to set foot on another planet.’ That’s not a science fiction sentence. That’s a factual, historical statement and I still shake my head in amazement when I consider it. I understand the historical context, of course, and the whole military/political motivation for it, the cold war competition and paranoia that gave rise to it—but I'm still overwhelmed by the achievement that Neil Armstrong embodied. The moon. He went there. He came back. Humanity did such a thing.

Since the news of Neil Armstrong’s passing, I’ve been lining up my nostalgic reading. Heinlein’s ‘The Moon is a Harsh Mistress’. John Varley’s ‘Steel Beach’. Arthur C Clarke’s ‘A Fall of Moondust’ and ‘Earthlight’. And I’ll be thinking of the man who did it for real.

'Move it, Songbird!' Osman the warden shouted at me, his voice muffled by the thickness of his sun-hood. 'Next spot, now.' – Anvil of the Sun, Karen Maric

It had never been done before. – Running Wild, Jack Nicholls