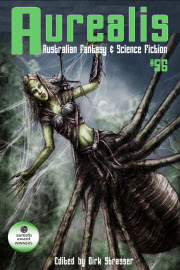 and non-fiction by Crisetta MacLeod

The Past is a Bridge Best Left Burnt – Paul Haines

Is this the Real Life? Is this Just Fantasy? – Crisetta MacLeod

Welcome to the final Aurealis issue for 2012. We’ve made it. This was our first year of producing ten monthly issues, and we've done it. All on time. All with what we believe are high quality stories and illustrations. All with the most up-to-date reviews and news at the time of publication.

We've also managed to achieve one of our other aims, and that is faster turn-around times for evaluation of submitted stories. I know there have still been individual stories that took too long to evaluate—these were usually the ones that were close to being accepted but not quite close enough—but our average response time was under a month. Sometimes turnaround was a matter of days. In fact, we were so fast that we occasionally had comments from writers suggesting we hadn't read their stories. I can assure all those of you thinking of submitting to Aurealis in 2013 that all stories are read carefully by at least two Readers (and up to six Readers if you're close to being published). The reason we're so fast in evaluating stories is because of the large team of Readers we have in place and the systems used by our Submissions Manager. So if you've just finished that masterpiece short story, and you've checked that it meets our guidelines, then give us first go at looking at it. Given the number of stories sent to us, we obviously can't guarantee we're going to accept it, but chances are it won't sit with us languishing too long without a response. And if we are foolish enough to reject your story, at least you will quickly be able to send it on to another publication.

Note the Aurealis offices close in December and January and we don't accept submissions during this time. Please don't send us anything in these two months. The stories will disappear into the ether. So you have until the end of November to get your stories in to us.

This issue is our second special Award Winners issue. The ‘Fruit of the Pipal Tree’ by Thoraiya Dyer won the Best Fantasy Short Story this year. It was originally published in After the Rain (FableCroft Publishing), edited by Tehani Wessely. The second story in this issue was joint winner in Best Horror Short Story category, ‘The Past is a Bridge Best Left Burnt’ by Paul Haines, from The Last Days of Kali Yuga (Brimstone Press). The version in this issue is the one edited by Talie Helene and is the same as the one which appears in The Year's Best Australian Fantasy & Horror Volume 3. This is a special story in many ways. Paul Haines died in March this year after a battle with cancer, and he didn't live to receive the Aurealis Award. A sad loss to the Australian SF community. We reprint this raw autobiographical story with the consent of his wife, Jules.

On a lighter note, the big news for next year is that we are setting up a new subscription system, so you will once again be able to subscribe to Aurealis. You will now be able to purchase a 2013 subscription of 10 issues (Aurealis #57–#66) for $19.99. This is a 33% saving on the cost of buying each issue singly. How can you possibly resist subscribing?

We’ve also launched our campaign to be officially recognised as a professional market by the Science Fiction and Fantasy Writers of America (SFWA). We’ve calculated that if we can get 1000 subscribers by the end of 2013, we will be able to increase our payment for short stories to a minimum of 5 cents a word. This will mean Aurealis has met all the conditions to be viewed as a professional market by the SFWA. If it can achieve this, Aurealis will be the only Australian fiction magazine with this status. See our website for more details.

Here's to exploring even more worlds in 2013.

I’m doing the speed limit in the inside lane on the West Gate Bridge. My rear view mirror reflects a bug-splattered chrome grill. The truck’s so close I can’t see its number plate. He’s speeding up to teach me a lesson. I turn up the radio. The blaring music drowns out the roar of the engine behind me.

Melbourne’s cityscape lies under a haze. If it was winter, it’d be romantic: a fog, a morning mist smothering the buildings, hugging tight as it edges out over the bay. But it’s summer: bushfire season has just begun and smoke chokes the city. The car’s thermometer hits 30 degrees before the clock hits 9am. Today is going to burn.